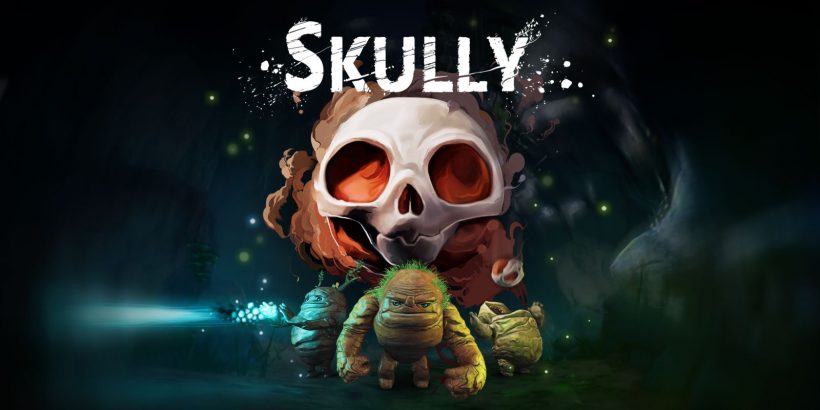 Skully begins with a bizarre intro featuring such slow stop-motion animation that I thought it was broken and running at something like 0.5 FPS at first. It doesn’t do a great job of explaining the story, but it sets up the scene for what we’re about to experience: weird, confusing, and just a little bit underwhelming.

The plot that gets introduced here is pretty mundane beyond revealing that we’re a reanimated skull. A deity (called, unexpectedly, Terry) is in need of our help to resolve some sibling conflict. To do that, we need to, er, play through the game and progress past obstacles. So, yeah, another example of plot adding almost nothing to the actual experience of the game. Some credit should be given to the manner in which the dialogue plays alongside the main action, as narration — it’s a nice touch, even though the voice acting may grate a little.

One place Skully does succeed in setting the scene, however, is in its environment, although I sometimes found myself wishing it hadn’t. For the location is a pretty drab and gloomy one, and everything has a weird shiny layer that only seems to highlight how brown and grey the world is. Although the graphics get more interesting later on, the first handful of levels offer very little variety.

The main controls at your disposal are to roll and to jump — I can’t really begin to resolve how a skull manages to jump, but there it is. Rolling is great fun once you get the hang of it, and it’s highly enjoyable when taken advantage of to speed across narrow logs or fly through the air with a long jump.

But the balancing is a highly skilled mechanic which you’ll find yourself constantly refining throughout the game. Different terrains behave differently and the controls are sensitive enough to guarantee that, whilst mistakes are plentiful, the skill required can be attained with practice. It’s very satisfying to finally master a perfect move such as dropping off a cliff edge and landing on a lily pad, quickly adjusting your tilt on impact to avoid rolling off.

Skully tries to have its cake and eat it by being primarily linear but adding lots of hidden areas to add diversions. The yellow flowers you’re tasked with collecting are supposed to make finding the way easier, but there were occasions where they really didn’t help enough. The dark graphics and awkward camera add to this problem.

In fact, Skully tries to have a second cake and eat it; this time in the form of its core mechanic. Alongside the balancing challenge of the main skull character, the game introduces three more creatures which can be morphed into at checkpoints. Progress occasionally requires the abilities — ranging from combat to speed to platform manipulation — of one of these Goron-from-Zelda-esque beings, and switching back and forth several times to solve an intricate puzzle certainly adds variety. But these alter-egos can sometimes be used to bypass the trickier balancing sections, since they don’t roll like poor Skully, and the morphing mechanic feels a bit like a bolted-on gimmick at times.

Despite pleasingly challenging controls and some well designed puzzles, Skully isn’t a particularly welcoming game. The camera and level maps don’t help, but it’s the environment and unsympathetic characters that are possibly the biggest turn-offs here. Although there’s fun to be had, it’s not really enough to write home about.

Skully bites off more than it can chew. Its central concept is excellent; the combination of the balance mechanic in a 3D world is solid. But the drab environment, awkward camera, and overall lack of quality take the shine off things.