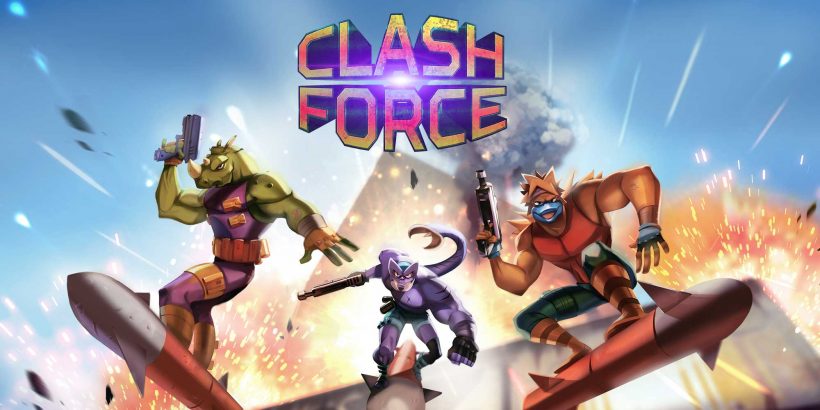 Throughout the course of one’s childhood, it’s only natural that Saturday morning cartoons become somewhat of a tradition.

It’s a time when a multitude of shows are vying for your retinal attention, and it’s integral they put their best foot forward at all times to solidify that foothold in your ever-young, influential heart. Where my childhood was abundant with Pokemon, Yu-Gi-Oh and Spiderman, there was always one that simply didn’t resonate with me: Teenage Mutant Ninja Turtles. Whilst I’m all too aware of the overt camp nature that so many of the iconic Saturday morning cartoons embodied, TMNT never quite sat well with me. Looking back on it with supposedly wiser eyes, I believe it to be wholly due to the poor character design. Everything felt uninspired and more akin to a raft draft of a character as opposed to the finished product; a cheap imitation that simply wasn’t able to hold a candle to the “real deal”.

Clash Force is, in many ways, the Teenage Mutant Ninja Turtles of the Indie gaming scene. A clear concept, littered throughout with not-so-subtle reminders that there are much better, fuller experiences to be had for the same admittedly low monetary investment. This 2D action platformer certainly looks the part, at least initially. Aesthetically, immediate comparisons to Mega Man can be made, featuring colourful, albeit bland, environments to traverse. The means by which you control the three main characters – Voom, Scorpido, and Echid – is also akin to that found in Mega Man, or more specifically the Mega Man Zero series, that implemented a much-appreciated fluidity to the games already strong mechanics.

It’s in playing the game for yourself that the many flaws become immediately apparent. Simply put, the game just isn’t fun. There’s not enough variety in the various enemy types to present a real challenge, even when playing on the higher difficulty settings, and the few alternate weapon pick-ups do little to drastically change the run’n’gunning that you’ll be partaking in in abundance. That’s not to say you won’t get hit by the enemies, which also causes you to lose said weapon pickup. It’s more than the copious amount of health blocks at your disposal through any and all level traversal does little to ever force you to play more cautiously.

The three playable characters themselves have artwork that’s again very evocative to TMNT – the game prides itself on it’s 1980’s cartoon inspirations, after all – but, as it should not be clear, they simply don’t resonate with me. They’re more reminiscent of those kinds of Sonic fan art contributions often found on Imgur, Tumblr and whatnot – For those that understand that reference, I’m sorry, and for those that don’t, please don’t Google it. Artwork aside, the conversation to character pixels does little to inspire and, again, you’re left playing a character that reminds you of a Team Chaotix reject – again, another Sonic callback.

Ultimately, it borrows so heavily from the clear inspirations that it does little to distinguish an identity for itself. The big bad, Crackman, could quite easily be Dr Wily in all but name. Again, yes, memorable villains may not have been crucial to both the 1980’s villains found in cartoons nor the early onslaught of 2D action platformers, but the rest of the experiences were at least enjoyable. Clash Force merely aspires to be enjoyable but misses the mark extensively.

Clash Force does little to justify its existence outside of being an almost competent attempt at celebrating both earlier cartoons and games. Impersonating others whilst failing the carve out a niche for yourself is never a good recipe for success.