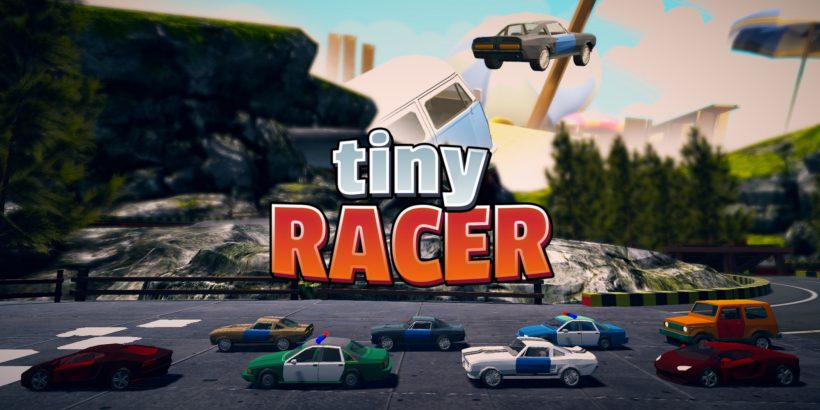 My first car was a Fiat 127 Super. Lovely little car. Zero to thirty miles an hour in three weeks, and an ability to shake vigorously when in fourth gear. I once went for a drive with some friends, and as the journey continued the car began to judder (more than usual), and smoke began pouring from the bonnet. My basic vehicle knowledge deduced that the car radiator needed water, and so we topped up the water and continued our journey. The car, however, was still resembling a just-boiled kettle on four wheels, with smoke billowing out.

Eventually the car gave up entirely. It turns out that when I had topped up the water, I had poured it into the windscreen washer container rather than the radiator. My poor car! It was a truly awful journey. But I would still rather experience that car trip again than play Tiny Racer one more time.

Screenshots for the game may look promising. The cars look cute, and the tracks feature a rather striking visual effect whereby the scenery in the distance is in soft-focus, giving the game a rather unique graphical style. But as soon as the race begins – oh my goodness – the car physics are so badly implemented that the slightest shunt from another car or the tiniest clip of the track edge results in your vehicle doing pirouettes and somersaults for a good few seconds while the opponents whizz past (I can see why the game has a respawn button). It is as though the cars have no weight; they may as well be made of cardboard.

I am getting ahead of myself here though. Before you can race, you must navigate the in-game menu system. There are not a lot of options available, but what few there are, are surprisingly frustrating to access. I don’t know if I have just gotten used to the B button on the Switch being a Back button for a menu system, but there’s no Back button here. You must use the thumb-stick to select a Back option. Little tweaks could have made the menu much more accessible.

Tiny Racer offers Tournament, Arcade and Time Trial modes, and a two-player split-screen mode. A selection of cars are available from the beginning, but only two tracks are on offer; others have to be unlocked. Whichever vehicle you choose, you will experience sheer hell in trying to drive the thing. Some of the tracks even feature drops that are near impossible to land on your wheels.

There are certain flaws in the game that make me wonder if there are just too many bugs under the hood. Whenever your vehicle hits an obstacle, a little comic-book style ‘Bam!’, ‘Wham!’ or ‘Thump!’ appears on-screen. One of the selectable cars, however, has these words appear constantly, even when driving in a straight line.

If only the cars were calibrated correctly, there could perhaps be some fun rides to be had in Tiny Racer. Some of the later tracks show promise in their design, but the journey is no fun at all, and so there is little incentive to persevere and unlock the later tracks.

One final point: I was unable to make Tiny Racer work in docked mode. The game would just freeze on a still image, telling me to press A to accelerate or B to brake. Perhaps it would be better for everyone if the game didn’t work in handheld mode either.

Tiny Racer is a painful drive. The graphics show promise, but there are so many flaws; it is hard to enjoy the ride. This is a terrible game. I’m getting out the car: I’ll walk from here.