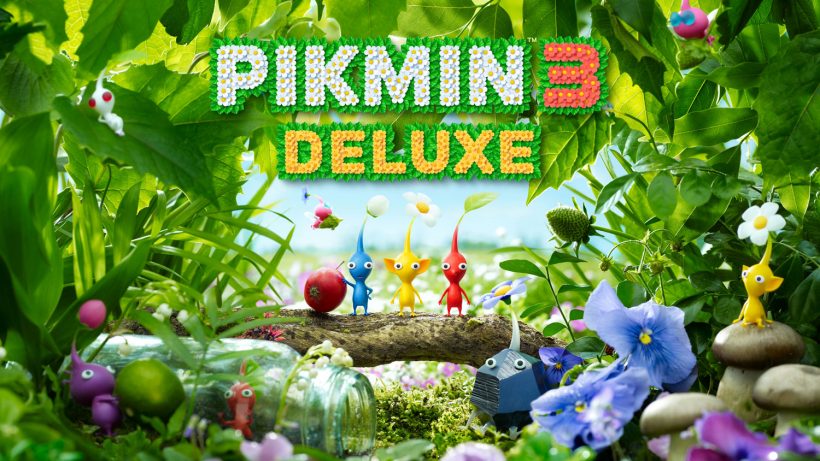 If you ever find yourself marooned on an alien planet looking for the food that will potentially save your famished species from extinction, you’d probably hope to be stranded on PNF-404. The simple reason for this is that it is the home of the Pikmin, and these little critters will prove crucial to your success in Pikmin 3 Deluxe, the latest in a line of well-received Wii U titles to receive a shiny Switch port.

Launching at the end of October, Pikmin 3 Deluxe is a third-person real-time strategy title where (via a trio of intrepid explorers) you control a group of anthropomorphic plant-like critters as you bid to stave off serious famine from your world. 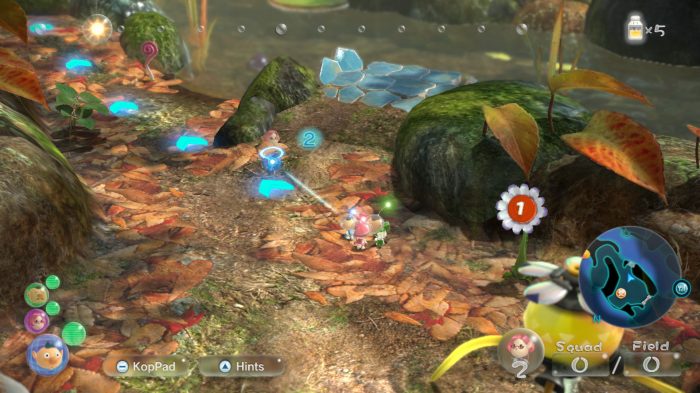 Luckily, PNF-404 is abundant with a wide variety of fruit – over 60 different specimens in fact – and you’ll command the indigenous floral buddies you encounter to carry, attack, smash and swim through all manner of obstacles in your path to reach it. The Pikmin come in a multitude of species, with red ones being resistant to fire, yellow ones being able to reach higher distances, and blue ones being able to swim – plus some new additions for this title in the form of rock and flying types. As you discover these creatures, you’ll learn how to best make use of their abilities to help you amass your own varieties of fruit cocktail at the end of the day.

After crashing on PNF-404, your first task is to reunite the explorer trio of Alph, Brittany and Captain Charlie before embarking on a quest to recover the Cosmic Drive Key to enable your return to your home planet of Koppai. At the start of every day, you will select an area on the world map to explore, and both your spaceship and the onion craft on which the Pikmin live in will land. You can then select up to 100 of the little chaps to follow you around with a blow of your whistle like some sort of alien pied piper, which can then be commanded and controlled at will. 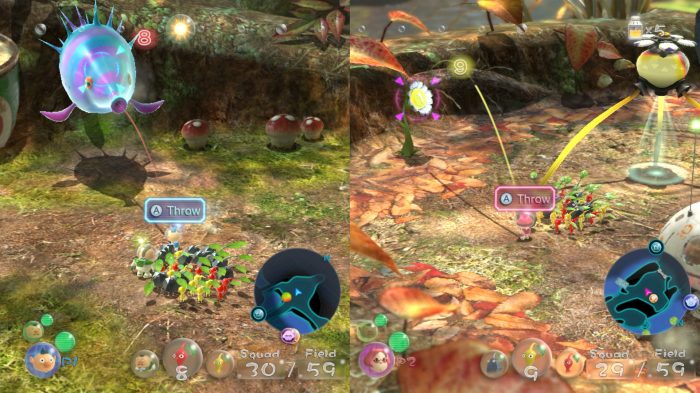 By cycling through the bumper buttons, you can select which Pikmin variety you want to dispense, and then throw them at whatever needs attention. Colourful numbered tokens can be found that will increase the number of Pikmin available to you at any time, which then sprout from the onion to join up with the ranks. But PNF-404 is as dangerous as it is fruitful, rife with beasties that love to eat little flower people. You’ll need to work out the best strategy to overcome them, but once defeated you’ll be rewarded with more flowerpot men. Collecting fruit isn’t a one-Pikmin job, so you’ll need to ensure you chuck enough for the collective strength to return to your home area. Something that’s new to the Switch port is the ability to lock on, which makes these sorts of endeavours so much easier for the player.

You’ll need to pay attention, though, as that clock is ticking, and you don’t want to be out after nightfall. Any Pikmin not under your control or in the safe zone will be left behind when you blast off for the evening, and the monsters mostly come out at night. Mostly. And then they’ll be gone forever, devoured by the terrors that come out in the night with your daily status report detailing their deaths. Nice one. Who’s the real monster? 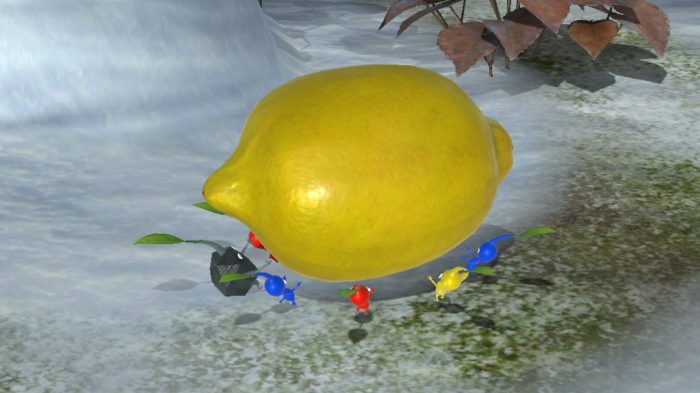 Any recovered fruit will be blended together to make a portion of drinks for the team, getting them ready for some more escapades for the next day. As you continue your adventure, you’ll unlock more of the world around you, and some more challenging enemy encounters. Oh no, it isn’t plain-sailing; take the Venomous Phosbat, for example. This horrid monster resides in an incredibly dark cave and is mostly invisible. Luckily for you, there are some electrical points in the cave, and Yellow Pikmin can also conduct electricity. Somehow, you need to turn on a massive lightbulb to incapacitate said beastie, before chucking a load of Pikmin at it to ensure its demise. You’ll need to have more than yellows, though, because they aren’t particularly strong, and this is where you’ll need to prioritise and strategise who and what to take with you on every excursion. I reached this part of the game in around seven game days, and there’s so much more to discover after, but we will discuss this more in our review.

Unlike the first title, where you recovered ship parts in a strenuous (and stressful) time limit, this third entry has a more relaxed approach with a more humanitarian theme in solving world hunger. It can also be played in co-op mode too, which makes multitasking less of a chore. Working in tandem with another player really increases your productivity, which makes for some interesting speedrun potential.

Away from the campaign, there is a range of different modes to enjoy as well. You’ve got mission mode, where you can either race the clock to collect treasure, battle enemies or even face off against the more fearsome foes that you’ve encountered in the main campaign. You’ve also got side stories, which gives us some familiar characters from previous adventures to mess around with as they attempt to collect as much treasure as they can. There’s a lot of content to be getting on with here as well, and it’s recommended that you play these alongside the campaign. Just like the campaign, both the mission mode and side stories can be played in single player or co-op. That’s all you’ll get from me! 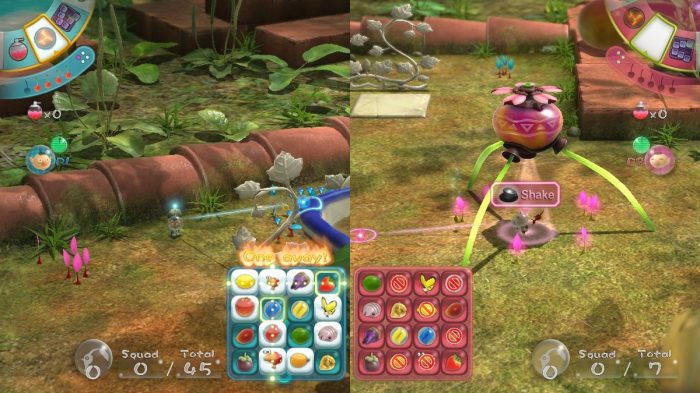 The final mode to talk about is Bingo Battle. This mode is a two-player face-off where you and another player attempt to build up the biggest score possible collecting fruits and creatures. With a four-by-four grid to fill and an array of Pikmin on your side, it’s a frenetic race to complete a line on the bingo card before your opponent does. Successfully beating a level unlocks another, to a maximum of ten, and I cannot stress enough how enjoyable and frantic this mode is!

The game looks and sounds incredible, and it is an absolute joy to behold on the Switch. The environments around you are luscious and vibrant; you could almost imagine with all of the noise and sensations that this was happening in your own garden. There’s so much more I wish I could write, but then I’ll have nothing more to say later this month in our review! Over the years it has been said that strategy titles don’t work on consoles. This is an example of how they do. With the right blend of action, strategy, pressure and fun, you’ll certainly want to keep an eye out for this. Don’t just take my word for it, there’s a free demo on the eShop now to give you a taster. You’ll also carry any progress over to the full game, and could also unlock the “ultra spicy” difficulty mode for the main game in the process.

Pikmin 3 Deluxe launches on the Nintendo Switch on October 30th 2020. Check back later this month to read our review!