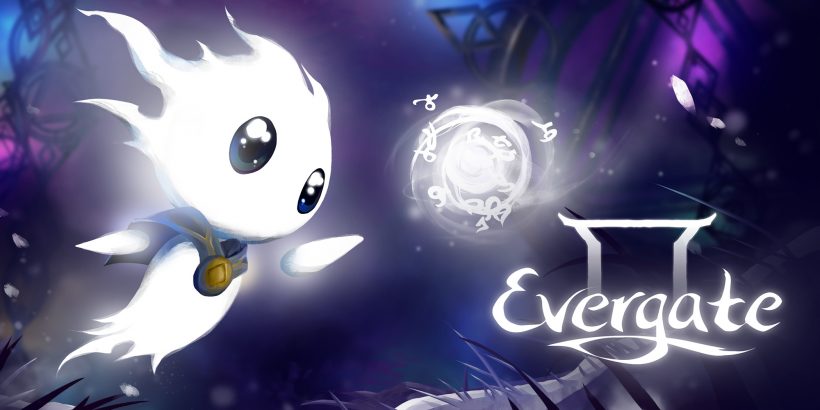 August’s Indie Direct was stuffed so full of spectacular games, it was inevitable some gems would fly under the radar. Many players were instantly wowed by Spiritfarer, Hades, and A Short Hike (each of which we awarded 4.5 stars at Switch Player, for the record), but Evergate was a tougher sell.

With such strong competition, two significant aspects of this game meant it struggled to stand out. First, it’s easy to dismiss Evergate as simply ‘another clone’, given that it bears a striking resemblance to Ori and the Will of the Wisps: all glowing lights, zoomed-out camera, and mid-air acrobatics. But more than anything, the greatest hurdle is simply conveying the concept at its core.

Evergate might look like another Metroidvania or even a straight 2D platformer, but the puzzle game is strong in this one. In fact, it’s a carefully constructed balance between puzzling and platforming: mechanics and physics are all important, but it’s their use in navigating each level, combined with working out just which path to take, that forms the overall gameplay.

You take control of Ki, a soul looking to return to Earth, haunted by mysterious memories. Most of the action revolves around the Soulflame, a device you should think of as a beam of light that can be fired in any direction, extending to the edge of your screen. If it hits a ‘Source’ surface (painted in white) and passes through one of ten types of crystal suspended in mid-air, you can activate it. Those crystals perform various functions including propelling Ki in various directions, creating a platform at the character’s current position, and teleportation. They can even combine to increase the options available.

The final piece of the puzzle is that you can slow time: an absolute requirement for lining up moves that demand angle-perfect precision. This is done — just — generously enough: time moves very slowly as you’re holding down ZR, and it slows for a liberal duration, although you’ll have to think reasonably fast to avoid the time running out, and everything speeding up again to ruin your move.

Initially, there’s too much going on, and the fiddly nature of the controls is possibly the only flaw on show. Having to deal with jumping (and balancing your speed & momentum to line everything up just right), and slowing down time, and pressing Y to activate the Soulflame all at once is significantly awkward. This can make the action repetitive, although that’s often the case with puzzlers.

But once you master the moveset, Evergate bursts with opportunities. Many of the 85 levels feature multiple paths to keep the player thinking. Each level also contains three optional objectives to complete, in order to gain upgradeables. Whilst not an original idea, it’s implemented here possibly better than I’ve seen it ever done before. Quite how the level designers managed to create a game that offers so many ability upgrades, yet maintains the puzzle challenge, I can’t quite fathom.

That Indie Direct really is the gift that keeps on giving. Evergate might not quite reach the giddy heights established by other recent releases, but it isn’t one to miss out on either. The graphics are familiar, but they are impeccably produced. The soundtrack is an absolute knockout. And, most important of all, intricate level design combined with playful mechanics and a vast array of challenges make Evergate an addictive, highly replayable delight.

Evergate is a precision puzzle platformer which looks beautiful and sounds fantastic. Although the controls take some getting used to, the intricately designed levels provide a wealth of challenge, and the power-up system offers many different ways to play.