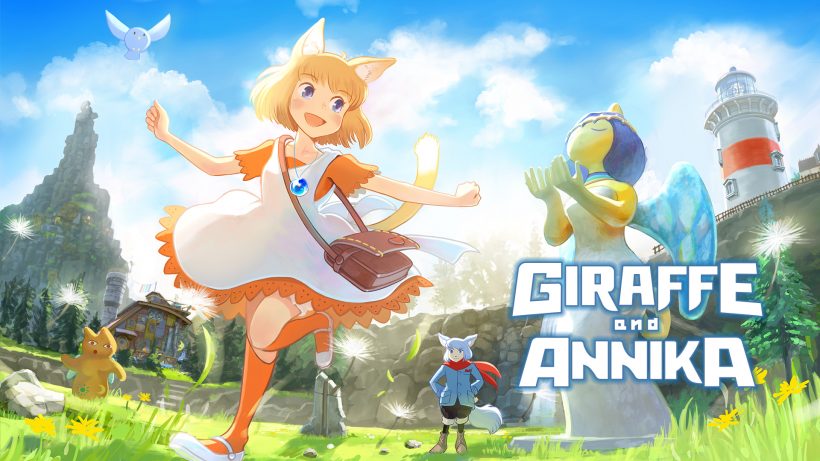 Are you craving something sweet? Something wholesome? Something that will warm your heart? Well, throw grandma’s homemade apple pie out the window because it doesn’t get any more sweet, wholesome, or heartwarming than Giraffe and Annika.

Giraffe and Annika is a delightful little adventure game that fits you into the furry ears of Annika, the last of the Felycans, a race of humanoids with cat ears and tails. Plopped down onto the island of Spica without any memories, Annika meets Giraffe, a helpful wolf-eared, wolf-tailed humanoid similar to Annika.

Giraffe tells Annika she must recover the three star fragments, and in doing so she will gain new powers and perhaps even restore her lost memories.

Gameplay mainly consists of roaming around Spica, talking to the handful of NPCs, collecting items to help you on your journey. At first, Annika can only walk, but as you collect the star fragments you will be given power-ups that will allow you to jump, dash, and stay underwater for a long time. In true adventure game fashion, unlocking new abilities will grant access to previously inaccessible parts of the island, thus progressing the story.

And boy what a story! Giraffe and Annika is one of those games where the plot is fed to the player in tiny bite-sized chunks; you have no idea what is truly going on until you beat the game, but it is worth it!

Gameplay is really quite simple: the controls, dungeons, mild platforming, and fetch-quests are not going to present a challenge to the experienced gamer. The only enemies are the cute – I mean SPOOKY – ghosts in each dungeon. These ghosts patrol the various dungeon corridors, and if one spots you it will squawk and chase after you, or attack you in some way; should the attack hit Annika you will lose some health.

Losing health is never really an issue, though. In the first place there are blue healing crystals everywhere and standing near one will refill your health bar. Secondly, you can constantly pick up pumpkins, carrots, and apples that Annika can eat to regain health.

Violence is next to nil in this game. The boss “battles” at the end of each dungeon are, instead, a rhythm game where Annika has to press A on the correct side of the screen, at the correct time (usually to the beat) while dodging unfriendly projectiles that can sap your health or freeze you in place.

The in-game graphics are nice, although the terrain textures are a bit grainy and low-resolution, which makes it feel like an older-gen game. The few NPCs are all cute and have their own unique personalities to help guide Annika, and the story, along. Most of the actual story is told in comic book form: the cut-scenes jump from beautifully drawn panel to panel, complete with speech bubbles and plenty of onomatopoeia.

There are plenty of collectibles and achievements that add extra replay value, as well as three difficulty levels for each musical battle that players can retry to attempt to get the perfect score.

All in all, Giraffe and Annika might not be the best purchase if you’re a weather-beaten adult looking for a gritty story and a hefty gameplay challenge. However, it’s worth it if you enjoy a wholesome, heartwarming, make-you-feel-things kind of story. I would consider this the perfect game to pick up for any younger gamers you may have kicking around your house.

Giraffe and Annika is fun, cute, touching and will fill the cockles of your heart with a warm gooey goodness. The perfect purchase, but mainly just for younger gamers. There’s also a physical release, including a collector’s edition with extra goodies.