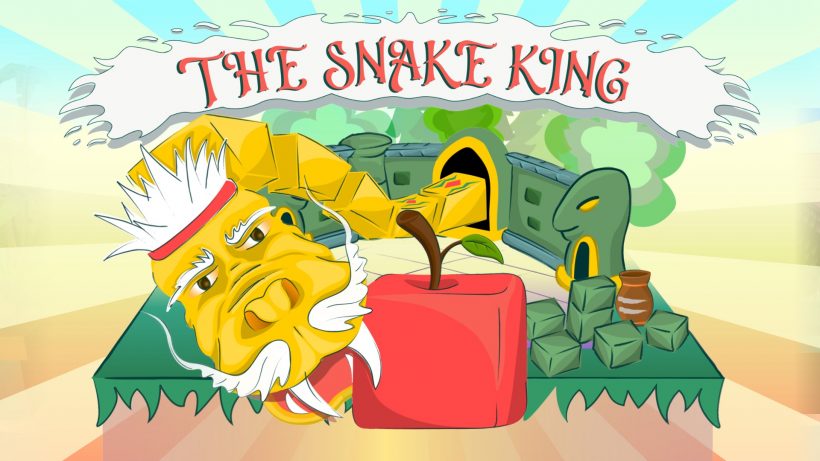 90s kids who grew up with a classic Nokia 3210 phone in the house will be instantly familiar with Snake: the basic but fun 2D puzzler that came pre-installed alongside, like, two other bite-sized games to help you pass the time. I probably sunk tens of hours into its second incarnation alone while sitting in the back of my mum’s car, if only to give her enough temporary peace to finish doing the shopping. Now that’s good parenting! The Snake King, however, is a feeble modernization on the ‘eat and get bigger’ concept, not iterating anywhere near enough to warrant a full Switch release.

At first, things start out promising. Though by no means a graphical powerhouse, The Snake King has a noticeable pastel colour palette and charming 2.5D look that definitely engages the eye. The Snake itself dons a white crown and yellow scales, which would be cool if it didn’t instantly lead me to believe that its aesthetic would be customisable later in the game. Because that would make sense, right? Unfortunately, you also quickly learn that, despite there being various overworlds each boasting a unique theme, most levels play extremely similar to one another – and there are only so many apples you can chomp on before gameplay becomes repetitive.

The core Snake experience here is incredibly bare-bones, and it isn’t helped by the lack of instruction as to how either the familiar mechanics or the few new ones even work. The Snake King just assumes you know to eat as many apples as possible, weaving and snaking your way around different rooms while trying not to crash into yourself. It tries to shake things up by not limiting your snake to just one room but several, offering up a slight sense of progression as you must dodge obstacles, open doors and enter a portal to move onto the next stage. This works alright for a little while, but after maybe ten levels (not even the first overworld) I felt the boredom setting in.

The Snake King was an opportunity to put a fresh spin on this classic puzzle game, maintaining what made the original versions so addictive while surrounding it with additional layers of polish and all-new incentives to keep on playing. Sadly, with no character customisation, high score system or cool power-ups to change the rhythm of gameplay, no such incentive exists. The one fresh element it introduces is an ability to boost through certain obstacles to help free up some space. It’s fine and works well enough, but rarely did I find myself using it as I could just as easily exploit each level’s multiple rooms by returning to them and gaining some leeway whenever things got too crowded.

As far as video game remakes go, The Snake King makes a great case for being the lowest effort yet. There’s some value to be had in working your way through its five worlds for a short while, but I can’t imagine that anyone would want to do this longer than maybe five minutes at a time – it’s better suited to mobile. I strongly believe that there’s a way to do a modern take on Snake correctly, but in case you hadn’t already guessed, The Snake King isn’t it. I would even say that this game isn’t deserving of its self-awarded crown. Here’s hoping that another developer cracks the formula in a way that feels fulfilling and new.

Despite being based on a classic 2D puzzler, The Snake King fails on almost every level to find a new direction and breathe new life into this tried and tested formula. The few mechanics it does introduce aren’t enough to keep you engaged for long.