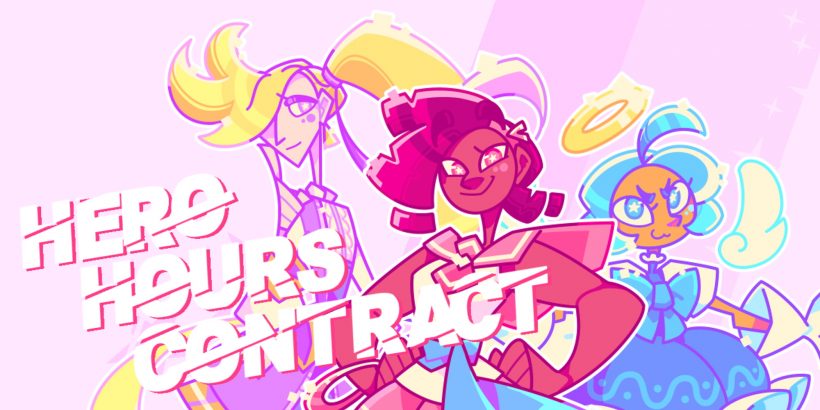 If you read the comments surrounding any game that touches on social commentary in an unusual way, you can be sure of one thing: somewhere, someone will be decrying the presence of “politics”. The fact of the matter is, however, that all games are political, whether they uphold the politics of the status quo or challenge them; Hero Hours Contract does the latter, offering commentary on the experience of the working class in this story about magical girls, unionisation, zombies, and workers’ rights.

The story follows three girls who go on strike from their zombie-fighting work to protest against underpayment and overwork, and what follows is a light-hearted plot about taking down evil corporations and banding together for the common struggle. The commentary isn’t what you’d call biting, but it nevertheless attempts to address some of the social issues that affect many under capitalism.

The game involves two main modes, both of which play into each other. The first involves puzzle-like gameplay where you fight zombies, which is essentially your day job; this allows you to harvest “happiness gems” for your employer which you can use to negotiate better pay, more time off, and bonuses. The second mode involves exploration and spending time with the other characters; your pay and leisure time are the currency that allows you to get to know the NPCs, while the other perks such as vacation time can help to unlock new areas and otherwise advance the plot.

As for the gameplay itself, the mechanics themselves are fairly poorly explained throughout, although thankfully the game is not particularly mechanically convoluted, so it’s simple enough to get by. Indeed, while the puzzle gameplay is for the most part repetitive, with the same environments, enemies, and audio tracks on rotation, it’s actually easy to get into a flow state when playing – surprisingly easy, in fact, given how low the stakes tend to be. There’s no meaningful lose condition for a large part of the game, which means a lot of the experience is just a matter of doing the same thing over and over to collect enough gems until you can progress the story. For variety, however, certain key levels introduce new mechanics, whether this be constraints on how many turns you can take, targets for how many zombies to defeat, or changes to the environment, and these provide a greater challenge and additional enjoyment, as well as allowing you to advance the plot.

Even so, while the bulk of your time with Hero Hours Contract is spent in these puzzle-like environments, where the game feels the most personal is in its characters. The magical girls are admittedly somewhat caricatured at times, but getting to know the NPCs is very enjoyable. Each of the characters you meet has their own distinct personality, motivations, and problems, and it’s a testament to the developer that despite the friendship mechanics still being fundamentally transactional, it never actually feels that way – the relationships feel rather genuine and it is enjoyable to witness their progression as the story develops. The game is also refreshingly casually inclusive, which is always welcome in my books.

Hero Hours Contract is not going to revolutionise puzzle games or adventure games, but it offers an enjoyable experience that challenges the status quo. Despite the repetitiveness and sub-par explanations, the game remains enjoyable, thanks to its narrative, aesthetic, characters, and the more challenging levels peppered throughout.

Hero Hours Contract is an inclusive turn-based adventure that is moreish despite its flaws. It’s overtly political, perhaps surprisingly so for the aesthetic and genre, and this combined with its charming personality helps it to stand out from the crowd.