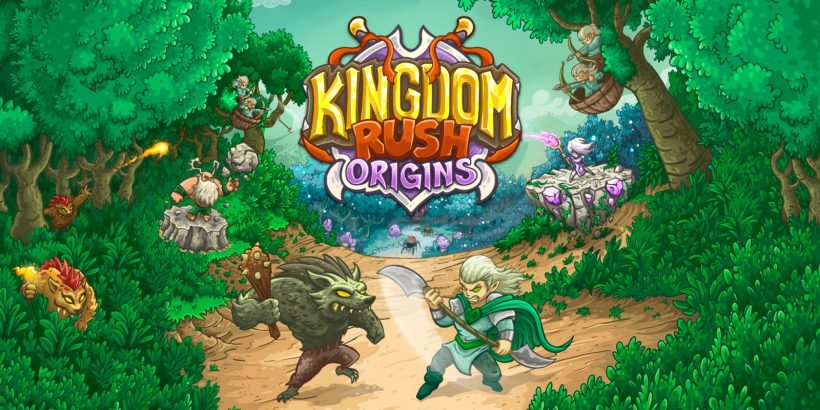 Kingdom Rush Origins will feel extremely familiar to those who have played Kingdom Rush or Kingdom Rush Frontiers – and that’s not an insult. There are minor differences, though – all welcome. Having played all three of these mobile games on both my phone and my Switch, I can safely say they are right at home on this console.

As the title suggests, this is a prequel – but newbies shouldn’t fret, because the story isn’t what we come here for. That said, you get a small written briefing before each level that gives context, and most levels have elements of the plot woven into the cartoony art. Interactive maps ensure that each stage feels distinct, and adventurous music doesn’t interfere or annoy (although sound effects might).

From the very first levels, it’s apparent that we’re in for some more interesting terrain than previous entries. Gone are the days of straight paths – now, they’re constantly interwoven, opening up new strategic possibilities – and new ways for enemies to skirt your defences and reach the goal you’re meant to defend. Aspects of the map can change over time, keeping you on your toes.

Left Stick cycles through different plots of land, which can be turned into four types of towers: Archers, Mystics, Stone Circles, and Barracks. The first three deal varying damage at different ranges and speeds. Meanwhile, Barracks soldiers can be repositioned to perfectly block the flow of enemies, opening them up to tower fire.

If that sounds familiar to series veterans – that’s because the essential formula has not changed. While the towers look different – especially the fully-upgraded versions – they serve the same purposes. And, as before, you cannot set priority for enemies, which is unfortunate when you have a tower focusing on a straggler rather than a big group.

Stragglers are easily dealt with thanks to Heroes, though. This return feature allows you to control a powerful soldier, positioning them anywhere at a moment’s notice. Some, like the starting Hero, have ranged abilities, while you’ll unlock stronger ones later. Picking off runaway enemies is also a cinch with the return of reinforcements and the power to smite foes with thunderbolts.

These enemies come in all shapes and sizes – and some are more susceptible to different kinds of damage. Killing them yields gold, which can be spent on towers – but it’s never as simple as taking down a marching horde. The levels themselves sometimes carry hostile elements which will affect your towers or barracks soldiers – but at the same time, there may be a helpful local who would offer assistance in exchange for payment.

Juggling these elements is a lot easier using the touch controls rather than the Joy-Cons, which makes sense given this game’s mobile origins. (See what I did there?) Still, it’s not too cumbersome to ditch the touchscreen – although, this game is better served in handheld or tabletop mode versus on the TV.

Each victory grants stars, which can be spent on upgrading Heroes, towers, and abilities. Upgraded towers can be cheaper and deal more damage, while ability upgrades include faster cooldowns. Points can be reallocated based on your needs, or just to experiment. Attempting levels at different difficulties yields more stars – and more excuses to replay this oh, so addicting tower defence game.

Kingdom Rush Origins improves on its predecessors while sticking with the elements that brought this series to success. As the saying goes – “If it ain’t broke, don’t fix it!”

Although nearly identical to its predecessors, Kingdom Rush Origins stands out from the competition. This prequel proves its worth, with some smart changes, an undeniable charm, and a lasting shelf life as a go-to tower defense boredom buster.