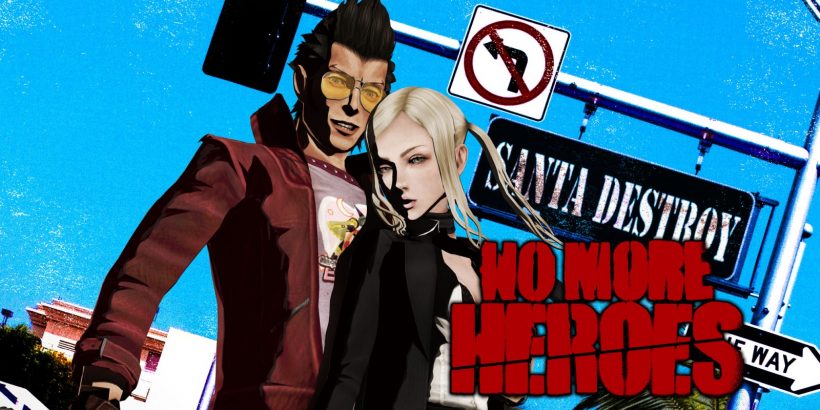 No More Heroes is a game that has you save your progress by going for a poop. And that pretty much sums up NMH’s attitude to game design. I’d never played an NMH game before, but frankly, I’m compelled to love this kind of nonsense. NMH is one of a kind: so irreverent, violent, hilarious, and borderline inappropriate, it will either mesmerise you in its unapologetic confidence or disgust you in equal measure. It’s certainly flawed, but the core experience is so downright bloody entertaining that I find myself able to overlook its problems and simply enjoy the action-packed ride.

Travis Touchdown is a bit of a slob, living in a manky motel surrounded by Otaku memorabilia and far too much pornography. He’s a vacuous personality – a toxic, egotistical, sexist moron that wants nothing more in life than to prove he’s better than everyone else and get laid. In this story, he tries to do both of these things by becoming the number one assassin in the world through the United Assassins Association rankings list. With the help of a rather mysterious, coldhearted femme fatale called Sylvia, Travis will rise through the ranks and raise his flag pole for victory.

The combat is incredibly slick for a Wii game, and Travis will use his beam katana – which is effectively a lightsaber – to deliver a series of basic attacks, as well as a range of awesome wrestling moves to lower enemies’ health bars before seeing them off with a satisfying finisher, lopping off heads in graphically violent displays. Of course, as a Wii original, all of this is designed with motion controls in mind. Wrestling moves, finishers, and other combat mechanics are linked to prompts on the screen. This can all be turned off in the menu if you like, but – and this is coming from someone that has never EVER opted to play a game with motion controls before – it really is the right way to play this game, and every flick of the wrist feels satisfying as blood gushes from necks à la Kill Bill.

Once you make it through an army of underlings, you’ll reach your target, and these bosses really are the highlight of NMH. The fights are satisfying enough for the most part, with some creative arena designs and a few gimmicks to differentiate between them. However, it’s the writing that really stands out, every cutscene filled with hilarious, campy lines as Travis brags, threatens, and indeed flirts his way through the game. Suda 51 has stated the huge influence that Western cinema had on NMH, creating this blend of cultures. Every encounter is a showdown; a tradition steeped in honour that in this world is regularly betrayed by the characters in favour of cheap tactics. The title is apt in that there really are no heroes here, and it’s for that reason that, despite all his terrible traits, we still root for Travis, because everyone else is just as bad – if not worse.

Now, if this were the extent of the game, I’d be pleased as punch. Unfortunately, there’s a whole other side to NMH that slows the gameplay down to a grind, and frankly shouldn’t be here at all. In between the high-octane battles and snappy dialogue, NMH is an open-world adventure. The city of Santa Destroy is fully roamable either on foot or by using your – quite frankly awesome – motorbike. It’s just a shame that aside from a few shops where you can upgrade your gear, buy new cosmetics, and improve your stats, this city is completely lifeless. Pedestrians walk around but never do anything. A few generic models of car drive down roads but any collision just causes you to awkwardly glance off them or fall off your bike. Considering NMH came out in 2007, three years after the likes of San Andreas, it’s unbelievable how underdeveloped this city is, and why anyone thought that was acceptable is beyond me.

To drag this out further, it costs a lot of money to enter each assassin ranked battle, so to raise funds Travis needs to complete assassin contracts, which are essentially beat ’em up rooms that aren’t particularly enjoyable; and odd jobs, which can be anything like filling up cars with gas, mowing the lawn, or collecting coconuts from trees. Needless to say, they’re all exceptionally dull, but intentionally so. Suda has said that these were inspired by the menial jobs he had to work before he was able to publish his first game, so it’s clear he’s having a little joke at our expense – forcing us to work through some banality to get back to the good stuff. It’s a heck of a prank to pull on your audience, and combined with the tedium of navigating the city itself, it left me with a sour taste.

On the plus side, NMH runs like a dream at a solid 60fps in HD, so if you loved it back on the Wii, you’re going to love it even more now. There’s no doubt that this is the definitive version of the game, and even as a new player, despite its many issues, I watched the credits roll with absolute satisfaction. It’s really not going to be for everyone, but it’s rare to find something this unapologetically bizarre, and I dig that.

For series fans, it’s a no-brainer; this is the best version of No More Heroes to date. As a newcomer, despite a lacklustre open world and some incredibly dull grinding, NMH still held my attention with brilliant writing and memorable characters.