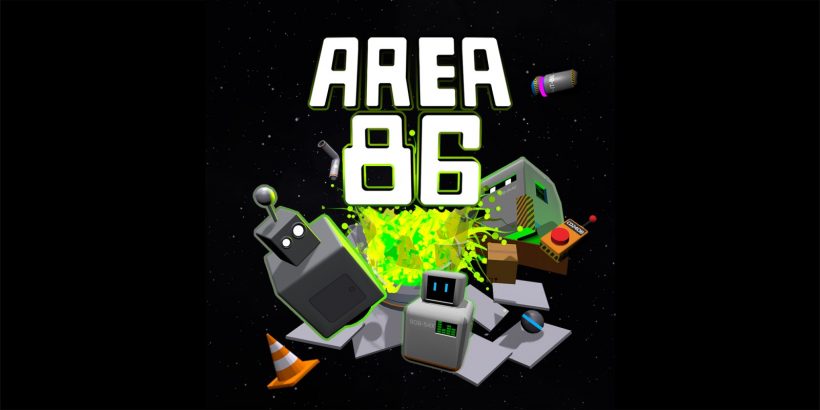 A physics-based puzzle platformer that throws you into a series of lab challenges and escape rooms, Area 86 is a promising indie title with a variety of brain teasers to keep players confounded and entertained. It’s a shame, then, that some malfunctions with precision and generally finicky controls throw a bit of a spanner in the works, making the gameplay often more of a tedious chore than it needs to be.

Set in a lab environment with a range of different puzzle challenges and physics-based trials for you to overcome in order to escape, Area 86 is quite reminiscent of the Portal franchise (specifically the little stick figure diagrams presented in the training videos) or Valve’s The Lab VR title, and has a whimsical, clumsy charm to it — conveyed right away by the bumbling little robot you control. Sliding around like Wall-E, the little unit is fun to command, and you can even customise it with a bunch of silly costumes and accessories before you get started with the puzzle-solving itself. Being the Switch version, I opted for a Mario-homage, donning a red cap, matching moustache, and blue overalls to boot.

Area 86’s premise is quite simple: rogue AI has taken over the space station you’re on, and the aim is to find an exit point for each escape room ‘lab’ level by smashing glass panes here, pressing buttons there, platforming and problem solving along the way. There is always something new and intriguing in each room to interact with, and hints scrawled along the walls if you get stuck and need help. Plus, there is a range of different ways to solve each level, depending on which puzzle contraption in each stage piques your interest first.

For instance, some puzzles will require you to jump across some falling ledges and platforms to reach the goal, while others will have you redirecting lasers, mending faulty wiring to channel power, and even throwing balls into narrow holes at the right trajectory. Each level is a nice sandbox diorama to experiment within, and you’ll find yourself at first thrashing around the place, making a mess and seeing what works before knuckling down and putting your thinking cap on.

While a certain level of jankiness forms part of the charm with physics-based puzzle games like this one, Area 86 can sometimes get frustrating. Able to move at high speed and slide around the different chambers, your robot avatar can satisfy by smashing through panes of glass or knocking over boxes and shelves, but struggles when it comes to placing things in exact positions or lining up puzzles precisely. Often when you’ve all-but solved a puzzle in your head you’ll then have to spend a while laboriously finessing the controls in order to execute your plan, by which point the satisfaction has waned slightly.

The platforming is also not precise enough, and with a few tight jumps that need to be made at points, it can quickly become infuriating. A few tweaks here and there could have made all the difference, either by improving the movement or making puzzles a little more forgiving, as I found myself sometimes not wanting to explore any more than I needed to after finding a way out of each stage.

Overall, Area 86 is a nifty — if frustrating — set of escape room challenges that fans of these sorts of puzzlers should enjoy for the price. With plenty of alternative ways to solve the puzzles and collectibles to find, there is replay value for those that enjoy the gameplay, but the janky controls and lack of precision often make it a chore to experiment with.

While the precision and jankiness can be more frustrating than it needs to be, Area 86 is a fun collection of physics-based escape room challenges that fans of the Portal universe may get a kick out of.