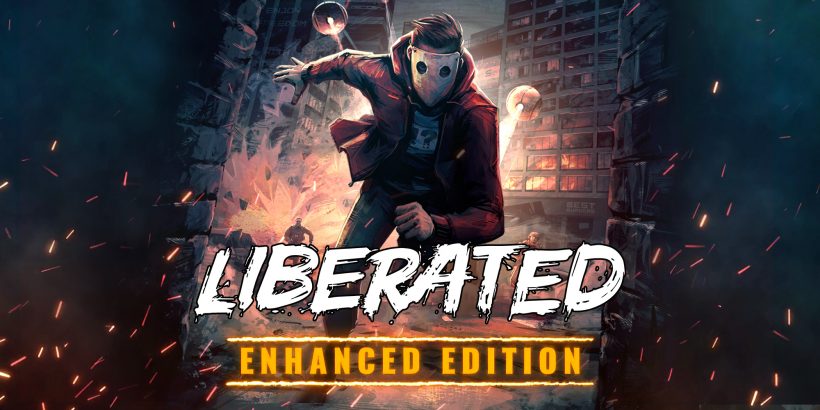 The first thing that catches the eye with this title is its striking art style. The graphic novel inspiration tells of a Sin City-esque tale, waiting to be unearthed. This design choice even permeates beyond the game to the menu system, with the level select treated like issues of a comic book, each covering a specific story arc within the overall narrative. The bleakness of the world on offer in this dystopian near-future leaps off the screen from the moment you boot up the game.

Throughout the course of this short three-and-a-half-hour experience, you take on the role of a number of different characters. You start with Barry Edwards, or rather, Duke Stroud, a man who doesn’t conform to the oppressive mandatory social norms imposed on the population. Once his alias is torn down, he’s picked up by The Liberated, a band of freedom fighters branded as terrorists by the system at large.

In this dystopian world, simply not posting on social media or having atypical views is enough to make you disappear. A system once designed to be a replacement for the credit rating now monitors every aspect of civilian life, keeping tabs on the population in a big brother trope all too familiar to those of us who indulge in the cyberpunk genre.

As the story progresses, you play panel-to-panel, sometimes watching a voice-acted scene play out, sometimes playing a 2D platformer similar to Shadow Complex. Sometimes the game shifts gears, requiring you to solve puzzles to access locked areas, or testing you with quick-time events. Even if you fail QTEs, you are almost instantaneously dropped back into the action, right before the input error. This is a small mercy that I was very appreciative of, and one that ensures you never feel too penalised for mistakes.

If you prefer a less challenging experience, you can change the difficulty via in-game settings, as well as at the start of a new game. The ‘Player’ option is aimed at those that enjoy a challenge, whereas ‘Reader’ sees the narrative elements of the game turned into the focus of the gameplay loop. Even though I selected ‘Player’, I never found any of the puzzle elements too challenging.

Although the visuals are fantastic and the sound design competent, this isn’t by any means a perfect game. The lofty and genre-centric social commentary is often heavy-handed in its delivery, shackled slightly by some particularly janky dialogue. The delivery from the voice talent isn’t the issue, but some of the writing is not as subtle as it thinks it is. Mass surveillance and government oppression aren’t new concepts in games like this and Liberated sadly leans into cliché more than I’d like.

I also experienced a handful of issues with the more interactive elements. On several occasions, there was notable slowdown and input lag when moving between panels, to the point where, seconds later, I was questioning whether the game had crashed or even registered my button press. Not to mention that, once or twice, my character seemed to get stuck on geography within the level, and I had to wait until they were killed to continue.

Despite these slight technical issues, and a story which isn’t exactly treading new ground, I found this game both enjoyable and addictive. The comic book panel system lulls you into watching/playing ‘just one more,’ and I ended up finishing this game in just one sitting. It enticed me to keep playing, reaching the story’s conclusion which was left unresolved in the best and most surprising way.

A beautifully designed outing that manages to balance both 2D platforming and interactive visual novel sensibilities. Its stellar graphic novel design inspirations only fall short due to some heavy-handed execution in the writing department.