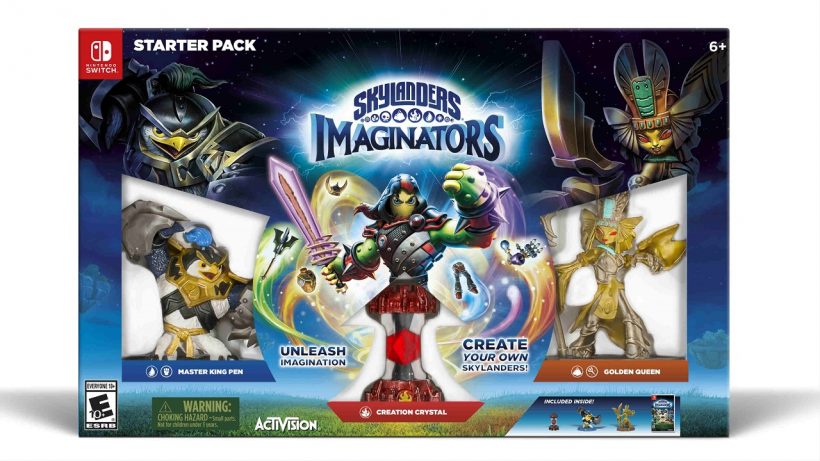 Activision is set to bring their latest Skylanders game to the Nintendo Switch at launch.

Skylanders Imaginators is officially set to be one of the Switch’s launch titles in the West, and will be headed to the system day one on March 3rd, 2017! If you’re unfamiliar with the title/series and need a refresher on what to expect story-wise in this toys-to-life adventure, we’ve got the official explanation from Activision’s initial Imaginators press release for you to have a read through below.

The story of Skylanders Imaginators takes place long ago when the Ancients used a mysterious power known as “Mind Magic” to create everything in Skylands. With it, they conjured into existence anything that they could imagine! However, they soon learned that in the wrong hands, it could be very dangerous, and so they sealed it away so that it could never be misused. After discovering this ancient secret, Kaos has unleashed the power of “Mind Magic” into Skylands once again – and he is using it to create an unstoppable army of Doomlanders, the likes of which have never been seen! Now it’s up to Portal Masters to create Skylanders Imaginators from their own imagination and stop Kaos and his evil Doomlanders before it is too late. And to help train them, Eon is sending the greatest mystic warriors of all time – the Senseis!

Well it’s important to note here that in its journey to the Switch a new mechanic will come into play, allowing you to truly take your adventures on the go. The Switch version of the game will support storing more than 300(!) toys from the Skylanders universe in a digital library, allowing you to take them on adventures without bringing all those toys with you.

Sound better than good? Well that’s not all the news we have!

Also coming to Skylanders Imaginators in March will be a new package called the “Cursed Tiki Temple level pack,” which brings a whole new adventure with over 100 unlockables, a brand new Sensei character – Wild Storm, a life Creation Crystal, and an Imaginite Mystery Chest.

Then, the Spring will bring another new Sensei; Grave Clobber. Once a great pharaoh who ruled over the Golden Desert, Grave Clobber was buried alive (in his sleep!) by his seven jealous brothers. Rising from the watery tomb they buried him in soon after, he took to clobbering each of his brothers for their misdeeds – becoming the perfect choice for a Brawler Class Sensei trainer.

Will you be picking them up?