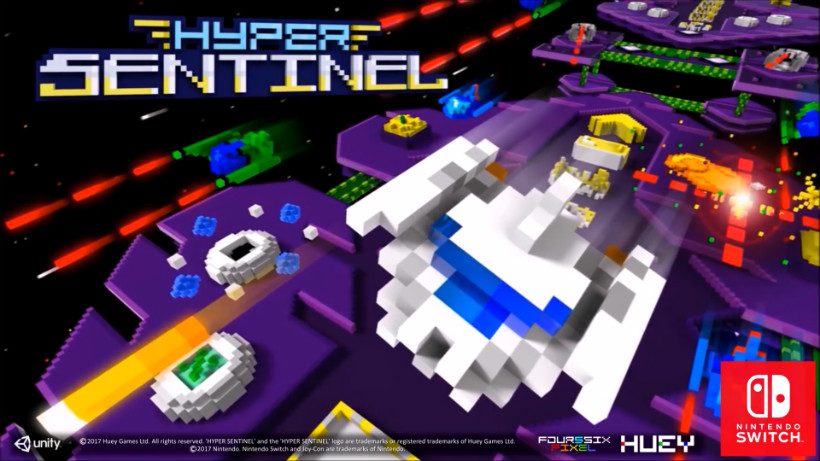 Remember Uridium? We do – and many gamers of a certain age will look back on this horizontal shooter with a certain fondness. Hyper Sentinel is seemingly a spiritual successor to this eighties classic, and developer Huey Games has announced their Kickstarter-funded project will be coming to Nintendo Switch!

Aah, Uridium. How we gazed lovingly at the revolutionary bas-relief graphics and that buttery-smooth scrolling. How we were wowed at the thumping electronic title-screen music, and frustrated at our inability to get past the seventh super-Dreadnought (or was that just a ham-fisted younger me?)

When Hyper Sentinel‘s February 2017 Kickstarter campaign reached 50% of its initial goal in a single day, it became clear there’s significant appetite for the game. Hyper Sentinel is so much more than just a love-letter to Uridium, Andrew Braybrook’s 1986 shoot-em-up. It’s an homage to an entire era, the golden age of 8-bit gaming.

Initially pitched as a title for Xbox One, PS4, PC, Android, and Apple devices, this week Huey Games announced the title will make a welcome landing on Nintendo Switch!

Funding for Hyper Sentinel quickly surpassed its original £15K goal and is now edging close to £23K – a level that will see the addition of a Spectrum graphics mode, making it even easier to relive that 8-bit era. Colour clash, anyone?

A pledge of £15 or more will net you the Digital Game Bundle for Hyper Sentinel, currently planned for a July 2017 release. You can choose which platform you prefer – a choice that will now include Nintendo Switch!