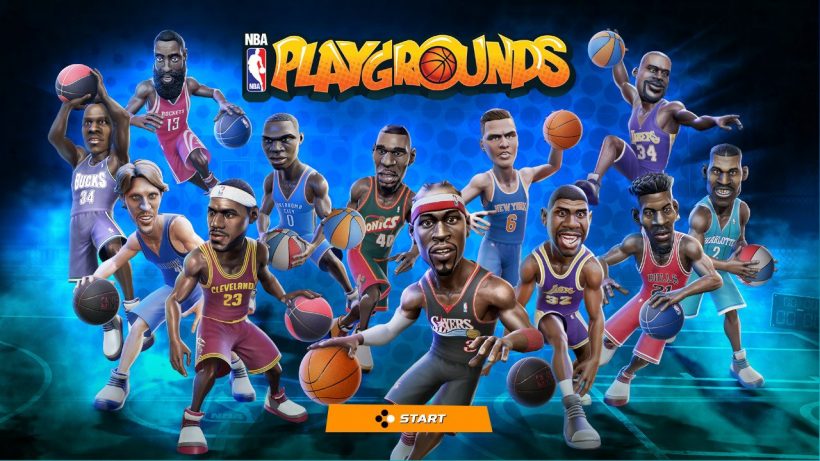 As a 90s child, that phrase would often ring out as I frantically spent my pound coins at the local MegaBowl arcade. Later, that same cry could be heard from my bedroom as NBA Jam became a firm favourite in my SNES’ cartridge slot.

When details for NBA Playgrounds started to surface, many people made the connection between it and Midway’s exceptional NBA Jam series – and rightly so. Two-on-two style, over-the-top arcade basketball action featuring ridiculous dunks and super-charged players? Sure sounds an awful lot like Jam, and truth be told it also feels an awful lot like Jam.

NBA Playgrounds is very much an arcade game at heart, and the small number of gameplay modes available to you from the offset surely highlights that. You’ve got Exhibition, Tournaments, and… that’s about it. There is an Online Match mode option there, but it’s greyed out as it isn’t available right now (though it has been promised as part of an update due “very soon”). Other than the options regarding your player card collection, Exhibition and Tournament modes are all you have to play with for now. 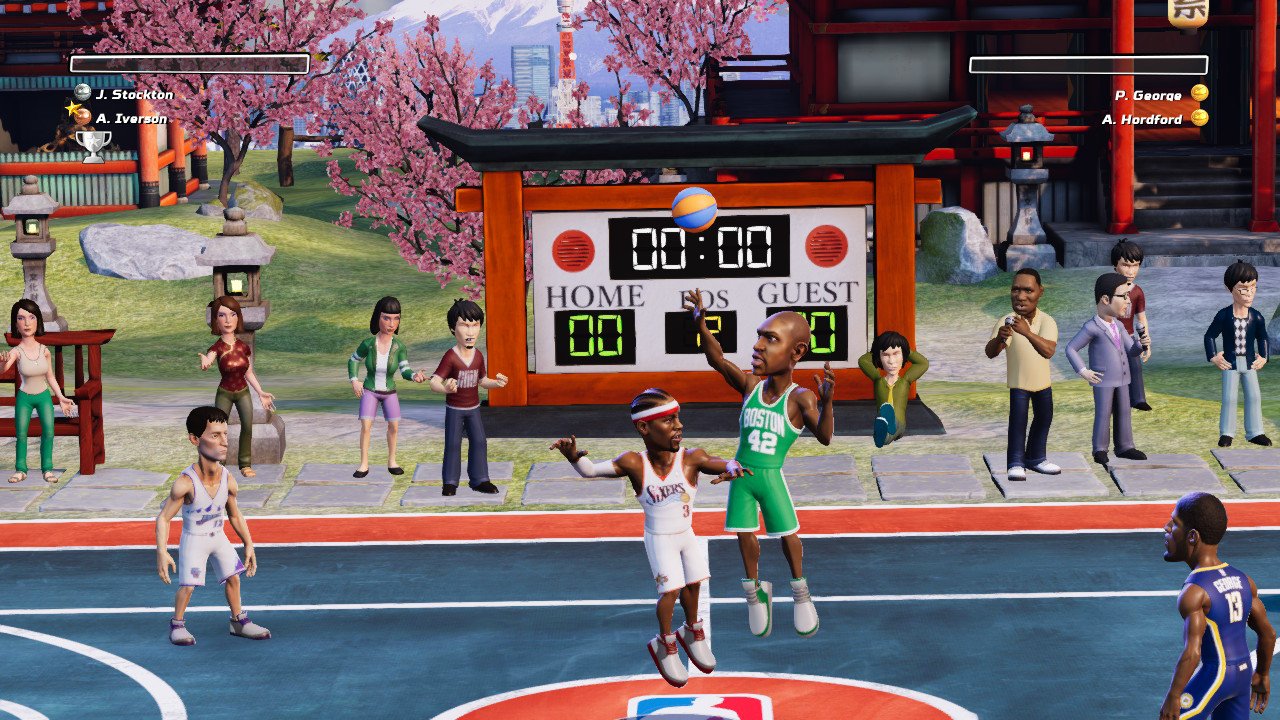 The meat of the game comes from the Tournaments mode. Here, you take your duo through four increasingly difficult matches, looking to win the tournament and progress to the next. Each one takes place in a different city (Las Vegas, New York, London, Paris, Shanghai, and Tokyo), and each captures the stereotypical scene very nicely. Once you’ve won each of the six tournaments on offer, you can go back and complete specific challenges in each game – such as getting so many dunks, which do add a bit of depth.

The gameplay is as simple as you’d expect, which is no bad thing; this is an arcade sports game after all. It’s very easy to pick up and play, but it’s also difficult enough to master that experienced players will really feel like they have an advantage over someone who has just picked up a controller to play for the first time. Playgrounds is pure fun to play in bursts – of that there is little doubt.

Like every basketball game, the shooting mechanic in Playgrounds requires the player to release the ball at a key moment during their shot. Normally this would be at the top of the players’ jump, but here it’s a little different – and hard to pinpoint and explain (to be honest). A sweet spot does exist, but it is more trial and error than perfecting your throw. This can make shooting feel a little frustrating and unrewarding, as often a 3-pointer will seem more like luck than skill.

To unlock players which you can use, you must earn card packs from leveling up your profile. Playing and winning games grants you experience points – and when you hit a new level, you get a new pack of cards to open. Win a tournament and you get a gold pack, which gives you a chance of the rarer legendary players (such as the cover-star Allen Iverson). There is no other way to unlock these players, so you’re completely in the hands of the RNG Gods if there is a very specific player that you’re hoping to unlock. An odd design choice, for sure.

Despite having a huge number of players to unlock via packs, once you’ve got your two guys who compliment your play-style (do you want to dunk lots, shoot 3-pointers or block everything that comes your way?), unlocking the remaining cast offers very little incentive. The only way the cards will keep you playing is if you’re a real fan of a specific team, or just want to collect every card for completion sake.

With such few options available, it’s the multiplayer where this game really shines. Cooperatively take on AI teams with your buddy, or go head-to-head against each other; either way you’ll have a great time trash talking, whilst simultaneously performing ridiculously unrealistic dunks. For a brief moment, it’ll feel like you’re back in that 90s arcade with your pound coins rapidly disappearing from your pocket. With any luck, the upcoming online multiplayer option will simply add more opportunity to enjoy this game with friends. 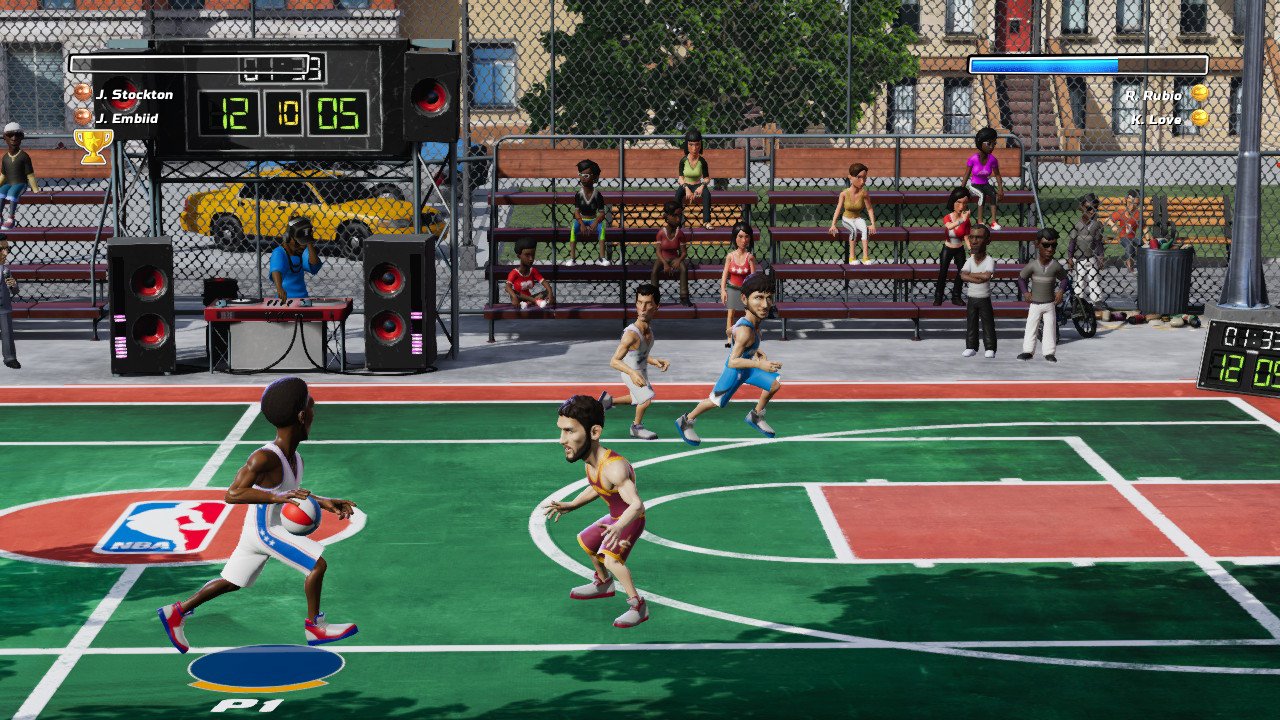 Presentation-wise, Playgrounds just isn’t quite there. The whole experience just feels a little cheaper than it should, and you can’t help but feel that it just needed that smidgen of extra polish to take it from being a decent game to a great one. Small details like the lack of on-screen score graphics, poor repeated commentary, and a terrible soundtrack are things that could have been remedied very easily.

Visually, NBA Playgrounds has a vibrant feel to it (much like the Jam games of old). It’s nothing special to look at, but it is certainly serviceable – that is until you remove your Switch from its dock. NBA Playgrounds is the only Switch game that I’ve played which has a significant decrease in graphical quality when you’re playing it handheld versus on your TV. I’ve grabbed my Switch mid-session on Zelda or Mario Kart and not noticed a difference, but this title really suffers graphically if you play it in handheld mode. It’s a disappointing and surprising result, especially considering what other games are already achieving on the hardware. 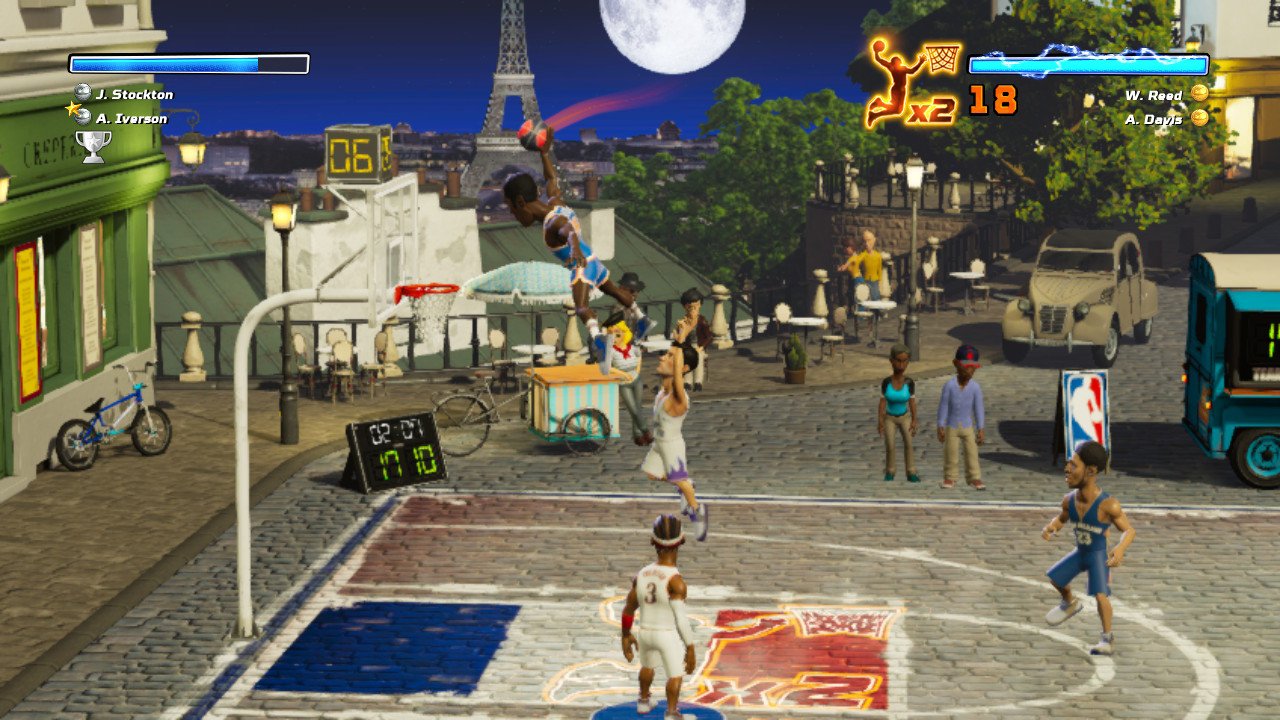 NBA Playgrounds is great fun whilst it lasts. Without the ability to play online, and given the fact that the tournament is over in a few sittings, there just isn’t much right now to make it a lasting experience. If you’re a huge basketball fan and you’re planning on playing a lot of local multiplayer, it’ll be far more appealing – but for everyone else, it’s probably best to wait and see how the post-release patches pan out. Some games can be greatly enhanced via patching, and it would be a shame if this wasn’t one of them.

NBA Playgrounds is a game that is instantly playable – but the more you chip away at it, the more you’re disappointed by the lack of content at release. It can be fantastic to pick up and play when you’re with a group of friends, but the lack of online multiplayer at launch means you’ll find yourself enjoying Playgrounds less and less very quickly.