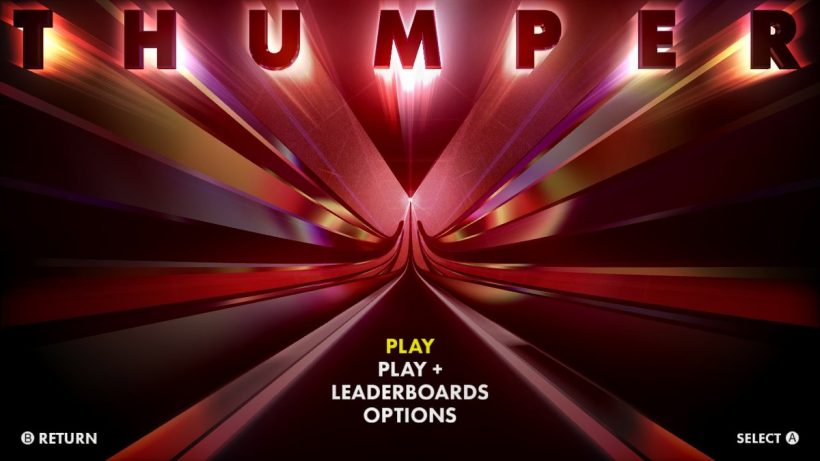 If you’ve ever been curious as to what it feels like being chased by a serial killer while piloting a space beetle along a rollercoaster into the mouth of hell, then look no further. Thumper is bound to make your palms sweat with its self-proclaimed “rhythm violence” on the Nintendo Switch.

At its core, Thumper is a rhythm game. An array of tunes pulses in the background while you – the player – combine button presses and tilts of the analog stick in time with its dreadful beats. I’m sure that sounds familiar to just about anyone, however what the two-man development team at DROOL have managed to create here is anything but ordinary. 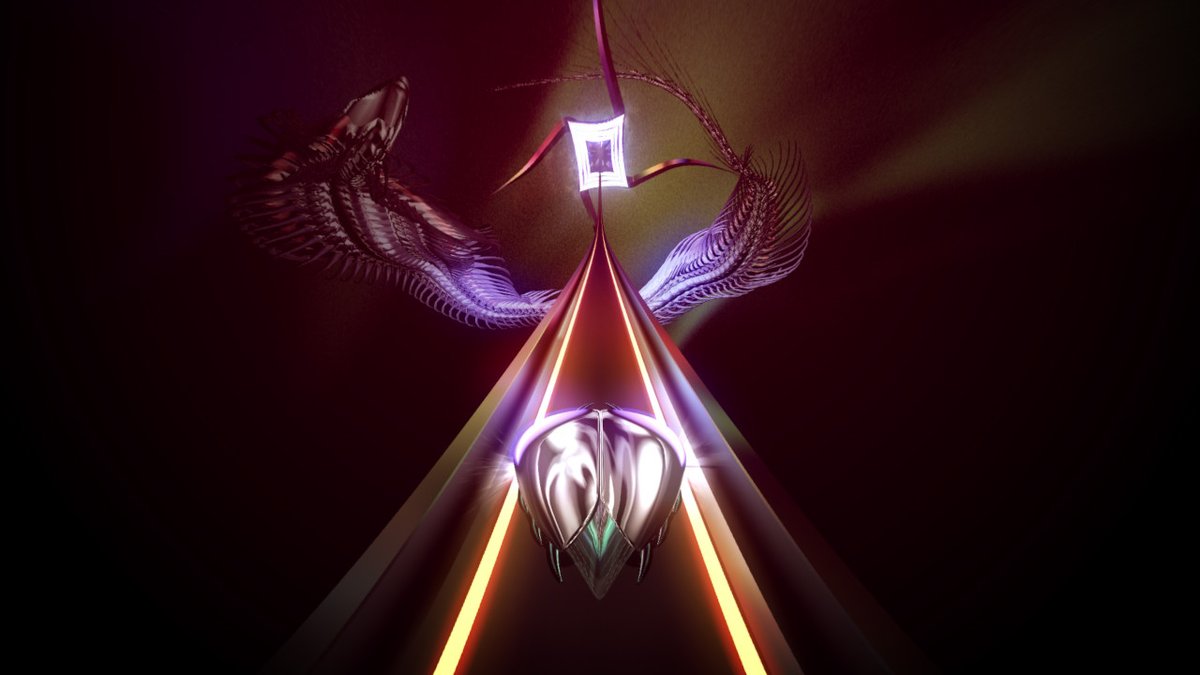 Thumper stimulates the senses. It fills you with dread while you unknowingly white-knuckle your controller and forgo blinking, and does so in a rewarding way that makes you want to come back for more. I gradually noticed my skills improving throughout each session, memorizing turns and jumps; yet despite subsequent playthroughs, I still found myself debilitated with a rush of anxiety that I’ve rarely felt in my thirty years of gaming. Thumper isn’t just about memorization and playing along with the music, it’s about survival. It’s about slowly improving your reactionary skills while being drawn into its visual miasma, which made for one of the most incredible experiences I’ve had in quite some time.

As a metallic space beetle, you find yourself rocketing down a trail riddled with bends and hazards crafted to work in tandem with Thumper’s unsettling tracklist. Each beat is typically met with a button press or an illuminated wall signaling a turn, braced against by pressing the A button while turning away using the left analog stick. Future stages ease you into new obstacles like floor spikes and lane changes, and even sprinkle in boss encounters to keep things interesting. Unlike most rhythm games where missing beats segues to the game over screen, Thumper only penalizes the player by applying mistakes to their overall level rank. Or, of course, you could die. Which you will. Probably a lot.

Thankfully, your beetle is equipped with an exoskeleton that can absorb one “mistake” before shattering to pieces – be it an unbraced turn, or crashing into barriers prior to boosting. This essentially gives you a single mulligan between checkpoints, which will restore the beetle’s exoskeleton if the A button is pressed the moment they cross the threshold. 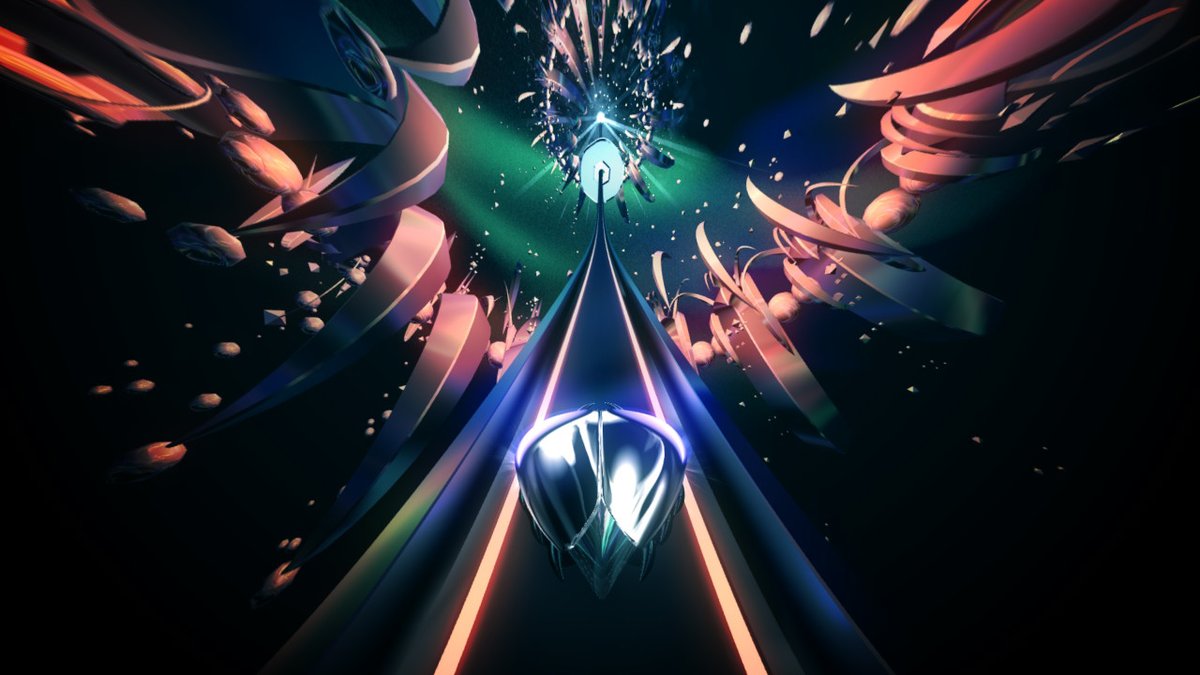 To say that Thumper is challenging would be an understatement, but its generous checkpoint system serves to make the game as accessible as possible to anyone determined enough to persevere. All nine levels are broken down into numerous bite-sized stages, separated by the aforementioned checkpoints. Dying within a stage merely drops you back at the previous checkpoint, though there is a Play+ mode that unlocks after completing the third level which increases the game’s speed and adds perma-death.

DROOL’s unique take on the rhythm genre shines on the Nintendo Switch, with a solid 720p display and 60 frames-per-second in handheld mode – which is bumped to 1080p when docked. Having Thumper in the palm of my hands (and thus closer to my face) seemingly provided more clarity, and assisted in making otherwise split-second decisions a bit easier to read. It plays just as well on the TV, but I always struggled to adjust to the spacing between my eyes and the TV after having played in handheld mode for extended periods of time. This is largely due in part to a developmental decision that adjusts the game’s perspective in handheld mode to accommodate for the smaller viewing area. A few failed attempts are all it took to re-acclimate myself, but I never struggled to transition from TV to handheld (only the opposite).

The Switch’s fragmented D-pad on the left Joy-Con has been one of my least favorite aspects of the controller’s design since launch, and I found that most of my mistakes in Thumper stemmed from using it over the analog stick. This is a non-issue in TV mode where I used the Pro Controller exclusively, but in portable mode I opted for the analog stick instead. The analog controls offered a much-improved, more responsive experience than the d-pad ever did; something which proved crucial when playing in handheld mode (and away from my precious Pro Controller). 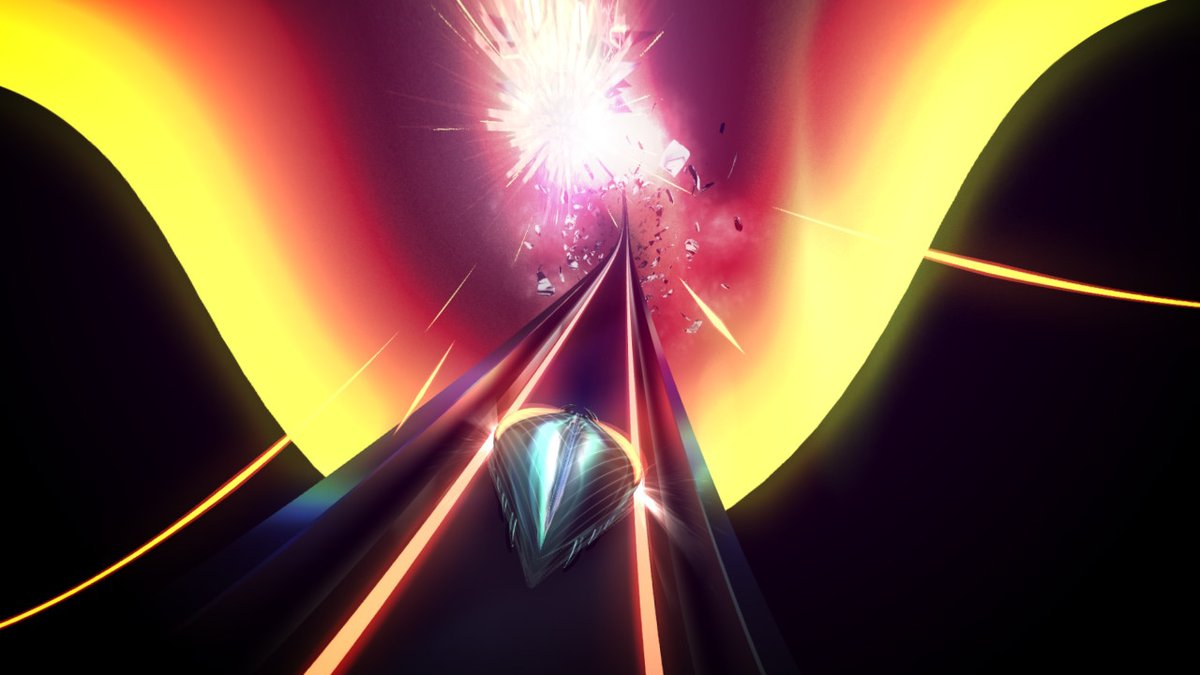 Also in regards to the controllers, it’s important to note that Thumper takes advantage of the Nintendo Switch’s HD rumble feature – which provides different levels of feedback depending on the situation. I could truly feel my beetle scrape along walls, crash through barriers, and send damaging pulses toward distant boss creatures. HD rumble is one of the Switch’s features that hasn’t been used effectively by much of the console’s ever-growing library, but Thumper is certainly one of the brightest examples of its implementation.

Where Thumper falters a little is in its repetition, mostly in terms of visuals. There’s not much in the way of color variety, so the game’s levels rarely stand out in any way – aside from their personal brand of obstacles. You’ll zoom down stretches of road populated by tunnels, tentacles, and other menaces, but each ends up as more of the same (visually, not by design) from checkpoint to checkpoint. This isn’t necessarily bad since most of my attention was drawn to the small stretch of track in front of my beetle, but a little variety wouldn’t hurt.

There’s also not much in the way of replay value if you’re not into chasing S-ranks or venturing into the brutally difficult Play+ mode, but the game is challenging enough on its own that you’re bound to spend at least eight hours working your way through the core experience. 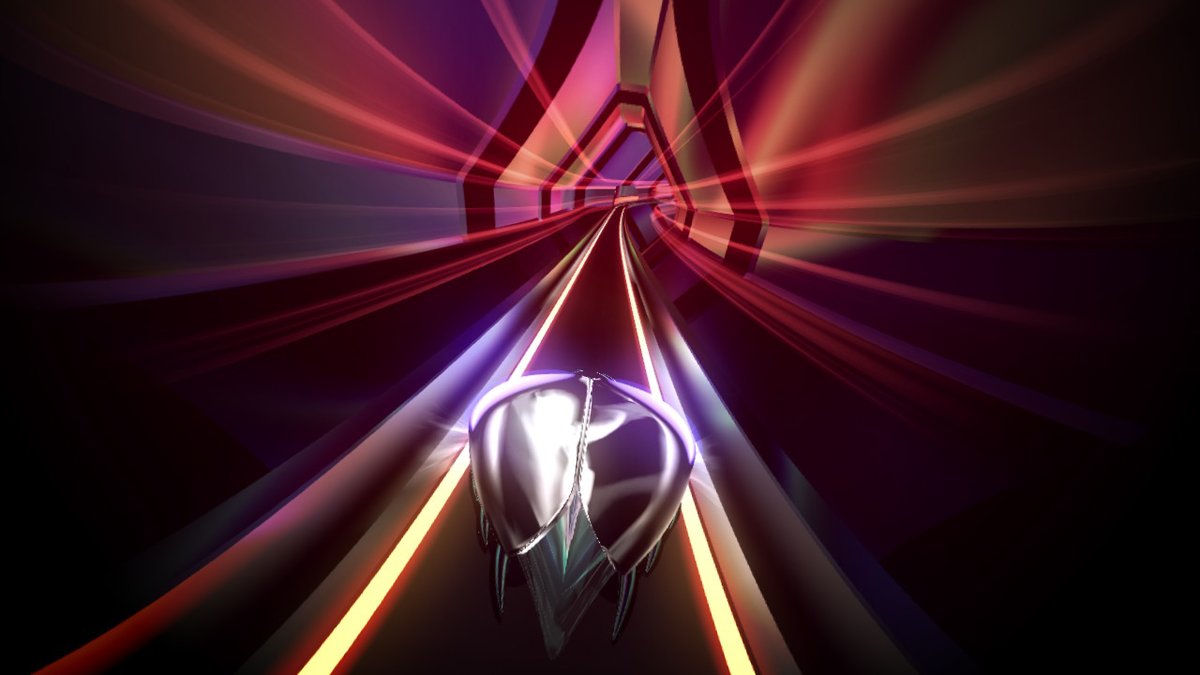 Thumper is intense, fast-paced mayhem; a game where the sense of speed and ever-looming threat of danger is equally exhilarating and relentlessly terrifying. It provides one of the most uniquely satisfying experiences on the Nintendo Switch, and exists somewhere between a disturbingly oppressive rhythm game and a nightmare-fueled solo racer. Everything gels together incredibly well, however – from the haunting visuals and meticulously crafted stages, to Brian Gibson’s evocative composition, and the overall feel of the gameplay.

For those of you looking for something different to pry yourself away from The Legend of Zelda: Breath of the Wild and Mario Kart 8 Deluxe, look no further. Thumper is an absolute must-play on the Nintendo Switch.

Thumper offers an extraordinary rhythm experience on the Nintendo Switch, and is heightened by its well-oiled reactionary gameplay, haunting soundtrack, and unique aesthetic. As one of the most enjoyable games on the console there’s very little it does wrong, but it must be noted that there’s not much staying power for those uninterested in chasing S-ranks.