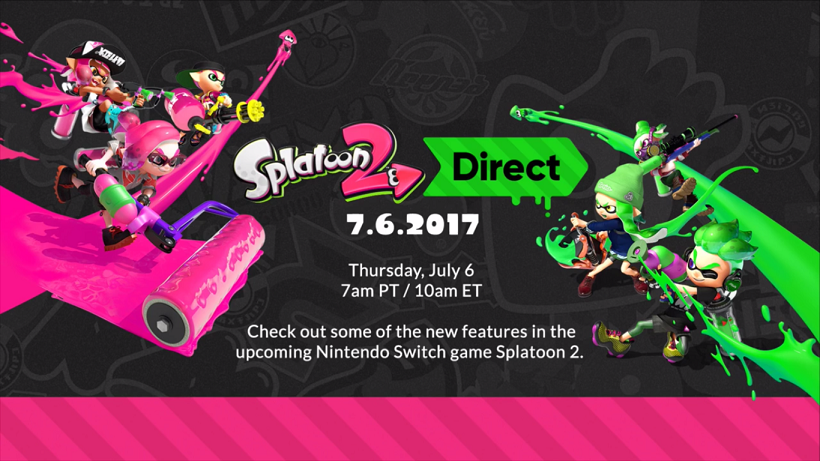 Today’s Nintendo Direct has gone over all the game’s bit in detail, and has revealed even more about the game in the run up to release.

As Splatoon 2 draws ever closer to release, Nintendo took to their Direct method of advertisement to recap all the things we should know – and introduce the ones we haven’t already met with. Being that the introduction via video isn’t how everyone prefers their information however (and because everyone needs a refresher), here’s a rundown of information and imagery for you to review.

First up we have to note the custom styling of Splatoon 2, where Inklings can be customized to fit your individual tastes and preferences. Eye colour, hair style, and skin tone are all able to be adjusted in the create a character menu – and that’s not even touching on the brand new shoes, shirts, and hats that are also available to kit out your little Inkling buddy.

Speaking of your kit, the gear you choose will contribute towards your player’s abilities; thankfully however, in the Inkopolis Galleria you’ll be able to get yourself all the things a little Inkling would need. Bisk the spider crab will fit you for some new shoes, Jelfonzo the jellyfish will hook you up with t-shirts and jackets, and Flow the sea slug will top you with a hat. As for weaponry, Sheldon the horseshoe crab is the man to talk to – while Murch the sea urchin will be the man you need to see if you want to equip your gear with abilities (so pay extra attention to what he says and shows you).

Abilities you can acquire and freshen your stuff up with include reductions in ink consumption, quicker movement, or even a decrease in spawn time (or an increase in spawn time for your prey). There are many different ways to give yourself an ability-fueled advantage.

Speaking of advantages, one comes in choosing the right weapon loadout. You’ll have a main weapon, a sub weapon, and a special weapon; main weapons varying in range and ink flow, sub weapons offering defensive as well as offensive attacks, and special weapons allowing for some rather spectacular attacks (once charged).

Moving away from the equippable bits, there’s also a place in the Inkopolis Galleria called Crusty Sean’s where you can get a bite to eat – or in other words; get points and in-game currency from battles.

As for the bits of the game that you’ll be able to play in (you know – when you’re not kitting out your favourite Inkling), there’s of course a single player style adventure – where Callie (of the Squid Sisters) has disappeared. Taking on obstacles, bosses, and the devilish Octarians, this is a great place to learn the basics and get a handle on the weapons.

That said, single player isn’t really what people come to Splatoon 2 for – and multiplayer is the name of the game. Modes for multiplayer start with the classic Turf War – where teams battle to ink the most turf. Ranked Battles are also available, and have you taking part in two hour runs of Splat Zones (localized Turf Wars), Tower Control (like capture the flag, but a moving tower), and Rainmaker (a capture the ultimate weapon style mode).

League Battles allow players to form teams with friends, and fight alongside them to top the charts. Players in League Battles can join in pairs, or in a group of four – but each team has four so you may be paired with another pair. 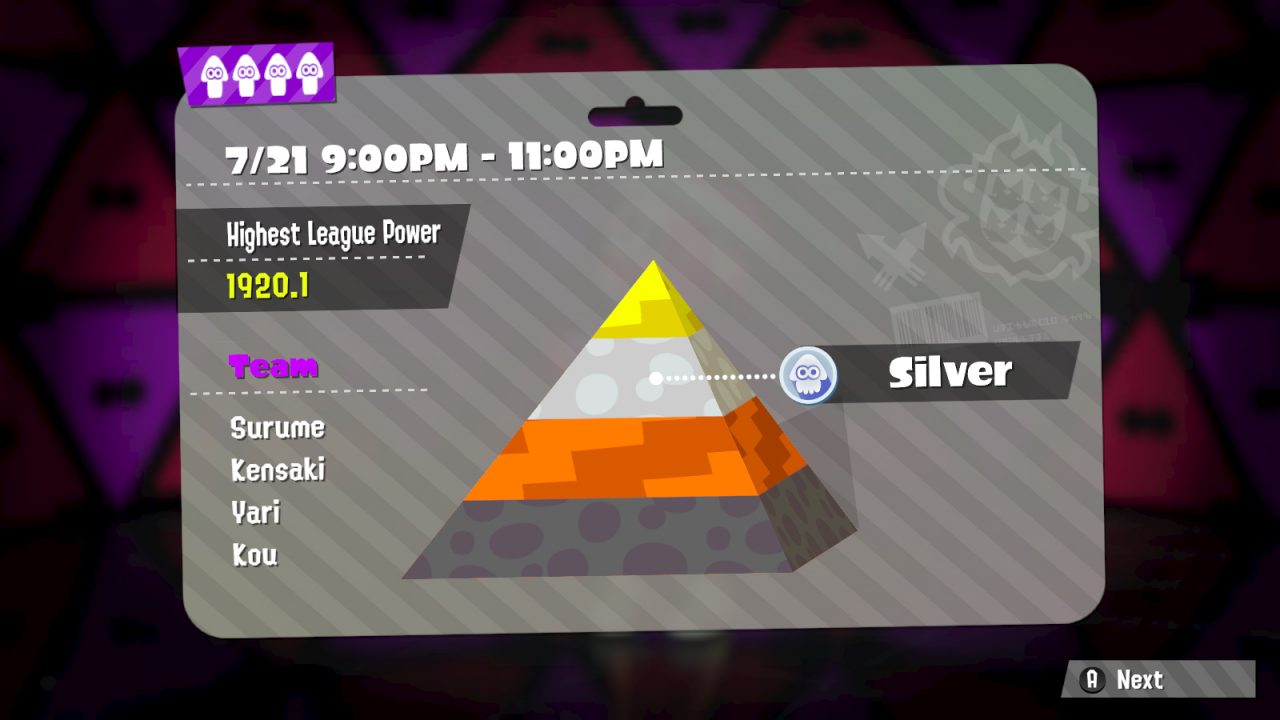 Then, there’s Salmon Run; a local and online multiplayer mode where you work with up to three other players to defeat bosses and collect Power Eggs. Salmon Run takes place over three waves, with each wave requiring a certain amount of Power Eggs to trigger. Salmon Run works like Splatfest in that it’s only available online at designated times, but it can always be played in local multiplayer.

Finally, there are the Splatfests – short festivals where players choose between two ridiculous teams and compete in Turf Wars for in-game currency. Planned to occur for at least two years, this is a more tournament-esque mode than the others and will be the favourite of many competitive players.

Speaking of competition and multiplayer, you’ll be happy to know that when the smartphone-based Nintendo Switch Online app launches on July 21st you’ll also have access to SplatNet 2. A Splatoon 2 service allowing players to stay in touch with information, SplatNet 2 tells you about schedules, gear, stats, and even lifetime inkage – with the Nintendo Switch Online app allowing players to join Private Battles, League Battles, Salmon Run, and Splatfest Battles, as well as communicate with those players using voice chat.

Other fresh features are inbound as well, as Splatoon 2 will allow you to set separate control sensitivity for TV and handheld modes. There will be amiibo functionality, and you’ll be able to save control settings, gear, weapon loadouts, and nicknames to any Splatoon figure (old or new). Finally, you’ll be able to post drawings directly to social media!

Post-launch updates are also in the work, and will roll out over the next year. You’ll see new weapons – like the umbrella-shapes Brella – alongside new gear and stages sometime in the future.

Interested? Well you can get another early taste (if you missed the Testfire – or simply want more) on July 15th, with a special pre-release Splatfest running from 3pm to 7pm Pacific. The Splatfest World Premiere demo client will be available for download today, so be sure to grab it and get ready; you can even log in, vote for your team (cake or ice cream), and visit the in-game mailbox while you wait. 😉

Those of you who prefer a video accompaniment can check out the Direct in review below, though I’d say that this post has covered most of the important points. 😉

Splatoon 2 is due out July 21st, but that early taste runs next weekend (on July 15th) – provided you have the demo client downloaded. 😉