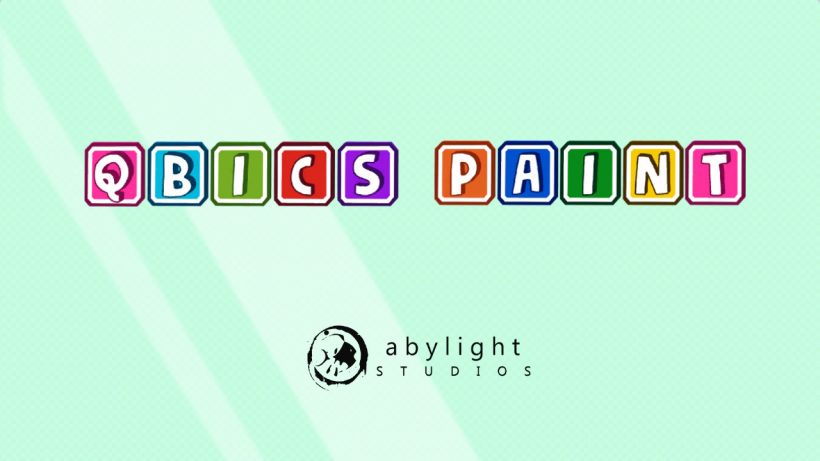 By having so many different play-styles and control options, the Nintendo Switch is naturally suited to a wide variety of games – small or large, traditional or quirky, or even just downright odd. Qbics Paint falls into that latter category. The idea is to sculpt and paint 3D, blocky figures – a simple enough premise, yet some strange decisions let the whole thing down slightly.

The game offers two different modes, the first of which is made up of several menus. Each menu has a theme – farm animals, zoo animals, toys and transport for example – and a selection of blocky paintings to unlock under each category. Upon loading one of the paintings, you’ll be presented with a large, white cube which contains the figure you are hoping to unlock. Your job then is to dig out the painting from inside this cube, chipping away at the white blocks surrounding it until it is free. Once it has been released from its blocky prison, your object is ready to be painted.

This whole excavation process is the first of those aforementioned strange decisions. On the one hand, it’s an interesting concept; you are actually scored on how well you manage to dig out the figure – getting three stars if you manage to dig around the figure without touching it too much, and being penalised if you accidentally hit the poor cat, chicken, or whatever it is that is residing inside. These stars then build up to unlock access to new paintings, and eventually new categories. On the other hand, the whole procedure feels incredibly tedious – especially after you’ve already done it fifty times, and all you want to do is create some new paintings (and hopefully stumble across a 3D hot-dog or something). In theory it should add something to what would otherwise be a rather repetitive game, but in practice it just adds a new kind of repetition to replace the old one.

When you get down to business and start painting the figures, things start to improve. You have a palette of 24 different colours to choose from, and painting is as simple as touching the colour you want before touching the block you want to colour. You are free to paint the objects however you wish, although there is a handy guide available on each level – giving you a picture to copy, should you want them to look perfect. This is particularly useful when you’re struggling to imagine which blocks make up which part of the object. 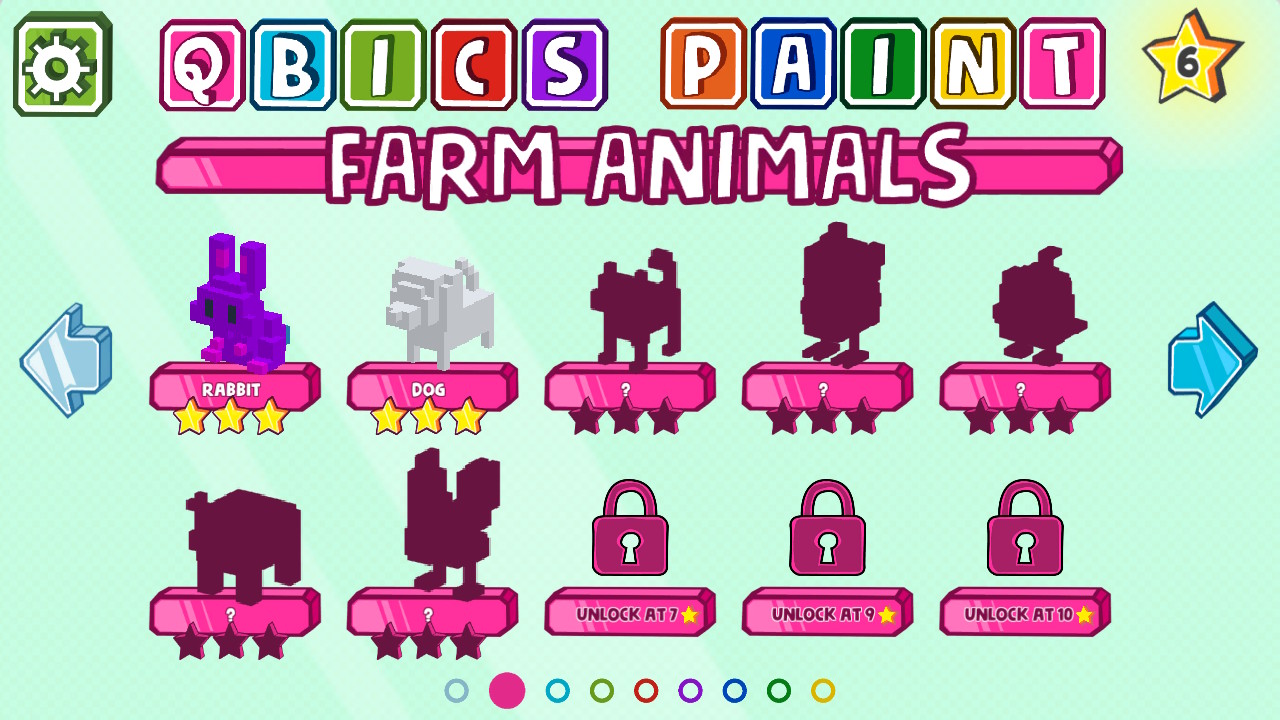 Every action you can perform is done on the touchscreen (naturally this means that handheld mode is the only one available – you cannot play this game on your TV). The actions are mostly intuitive; swiping with one finger rotates the figure, and you can zoom in by using two fingers on the screen – just like with modern smartphones. The only negative point here is that it can be a little fiddly when you are trying to touch a block that is rather tucked away. You can always zoom in to try and help with this, but people with larger fingers may still struggle at times.

The second mode available is called “My Qbics.” Here, you get to create and save ten of your own 3D masterpieces (or abominations) from scratch. You start with a completely blank canvas, and have the option to create whatever you like (as long as it can fit within a 20 x 20 cube grid). You’ll start by drawing out your creation with blocks – refining it as you go along, and then swapping over to the paint option (which works exactly how it does in the other mode). Handily, you can swap back and forth between the two with ease; if you start painting and realise your not-so-perfect statue of Mario has an eye missing, you can jump straight back to the creation screen and sort that out. The interface and options available to you aren’t perfect as there are several features missing that would have been welcome, but for a harmless bit of fun it does the job. 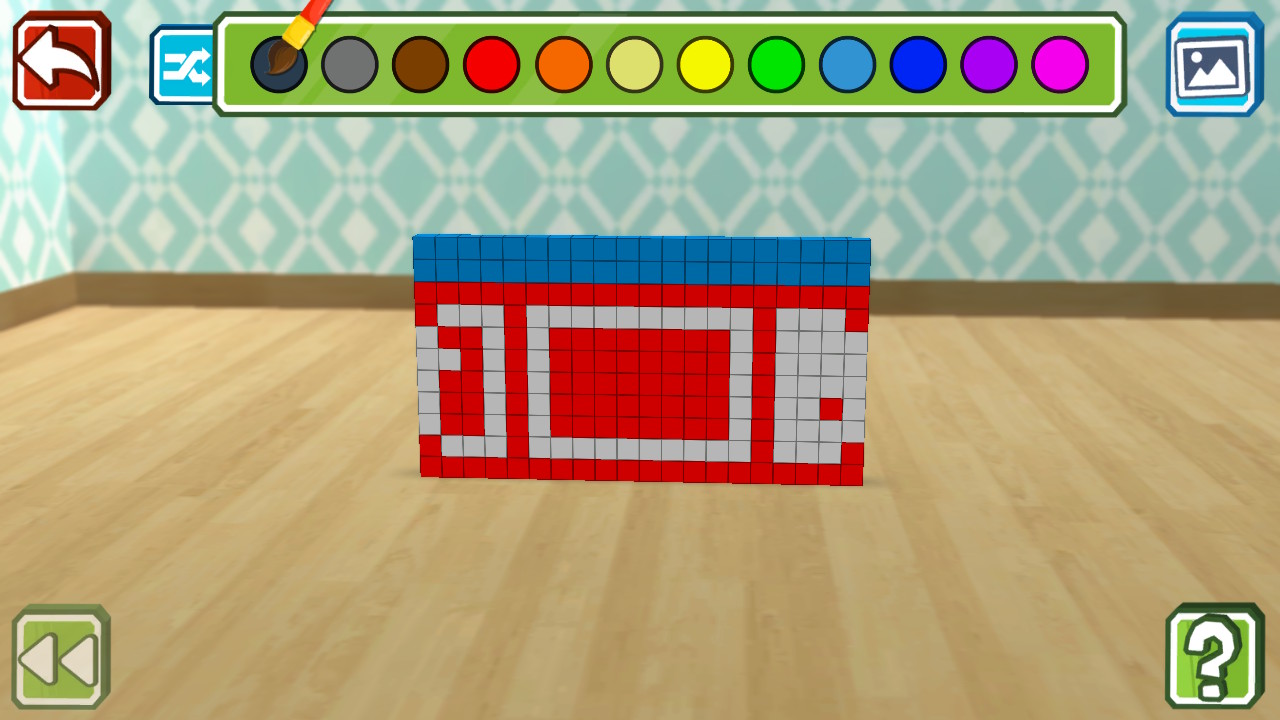 All of your paintings across both modes can be put on a backdrop of pre-installed pictures, such as forests or beaches. From there, you have the option to hide all of the menus and tabs to get the perfect photo opportunity – the idea being that you can hit the screenshot button on the Switch and save your creations to your album, or prep them further for sharing to social media. This is the next strange decision in this writer’s opinion, as the game seems to be (for the most part) aimed at a younger audience. Whilst the sharing option is another welcome feature, it is unlikely to be used that often; children that are playing this game will be less prone to having and using social media accounts, so having something different that they can do with their finished creations might have been a better avenue to take.

In the end however, Qbics Paint is a nice little package. There is a wide selection of pre-made figures available to get stuck in to, and the option to create your own from scratch is very welcome. The painting interface is decent, and seeing your creations come to life through colour can be enjoyable. The game won’t satisfy those who want a professional, artistic experience full of features like Art Academy and Colors! 3D for Nintendo 3DS – but this was clearly never the game’s intention. Instead, what we have here is something that you can dip in and out of just for fun. Too bad that fun is somewhat flattened in places.

Definitely one for the kids, Qbics Paint is something that will provide some enjoyment for a younger audience – or simply those wanting a simple application to pass the time. The features included do the job to a decent standard, although other titles have managed to provide a more streamlined artistic toolkit in the past. There are perhaps better alternatives available for art-based games, although the premise behind Qbics does stand out as being its own identity, and this cetainly isn’t the worse purchase you could make.