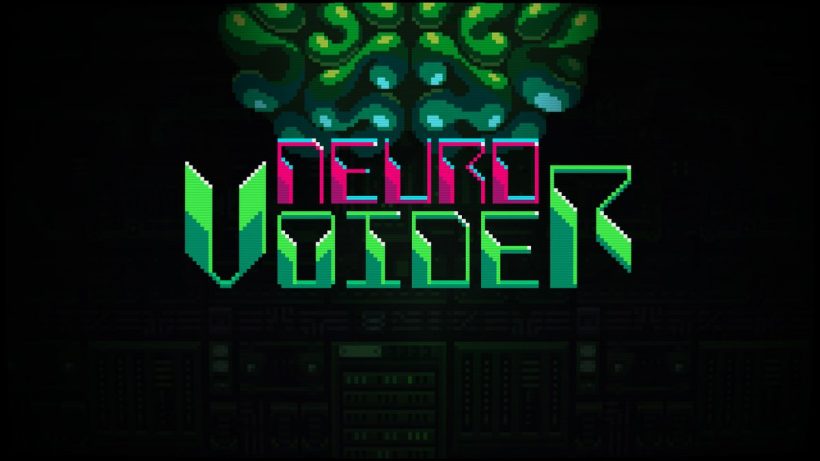 The Switch hasn’t got too many games which allow you to take out all of your real-life frustrations by unloading a load of explosives in the direction of hordes of killer robots, has it? Fortunately, NeuroVoider is here to fill the, ahem, void.

NeuroVoider is a rogue-lite – think the dungeons of the original Legend of Zelda but with randomly generated map floors and enemy numbers. You’ll be making use of both control sticks to move and aim, all the while trying to avoid the bullets and beams heading in your direction.

As far as the story goes, don’t go looking for too much of it. You’re a brain, who for some unexplainable reason is able to summon the power to smash its way out of a holding tube to unleash some mega mayhem on a series of robot enemies, whilst clad in robot death machine gear yourself.

If you’re playing as a newcomer to the genre, though, watch out. While there is a quick little tutorial showing you how to use weapons and the three choices of weapons and skills, from there on it rather unforgivingly drops you straight in. You can play the Arcade Mode, which is specifically designed for newcomers to the genre, while Rogue Mode offers the ‘base’ NeuroVoider experience before Voider mode offers the maximum level of challenge. There’s also a daily online challenge – everyone gets the same map to play, and then it’s all about progressing through and lasting as long as you can. A leaderboard shows you where you rank up against the strongest NeuroVoider players in the world.

Each of the three choices of robo suit have their positives and negatives. The Dash suit gives you an auto gun/cutter arsenal (these are activated by pulling ZL and ZR respectively), while also quite predictably offering the capabilities to dash towards or away from danger. The Rampage class offers an auto gun and shotgun – this time offering a bit more range to your attacks, but reducing your attack speed if enemies get too close. The Fortress option gives a rocket launcher as your ZR choice, and also allows you to shield yourself from oncoming weaponry traffic. Pick wisely – if you aren’t well-suited to your choice of class, you’re mincemeat. There’s also plenty of options for suit customisation between levels, depending on how much loot you’re able to extract. These are both aesthetic and functional, so set aside time for some experimentation.

Next, you’ll need to choose a skill. These offer a varying level of assistance, from teleporting yourself back to a previous position, to suppressing all enemy bullets within a range, and so on. Both skills and weapons require a recharge time so you don’t spam and/or overheat them, and this is where things get tricky. It’s all well and good to go in all guns blazing, but when you find yourself in the middle of a rainstorm of bullets and pulling the trigger button does nothing, you’re going to find yourself seeing the game over screen a ton more than most would like.

Your final choice is between stage, and you’re given a ranking system to differentiate them. Some are smaller in size but have more enemies and treasure, others reverse that completely and the rest offer a mix. You won’t really know what the best approach for you is until you try it, but it’s probably worth taking on fewer elite enemies when you’re just starting out. If you aren’t happy with any of the levels on offer, you can reroll the dice once for free, but after that it’s going to cost you some of your hard-earned items.

You make your way through each level by destroying a set number of reactors which are spread out across the map. On the way you’ll find crates which offer useful RPG upgrade items, including the scrap metal which usefully allows you to choose from more levels at the select stage. That’s as complicated as it gets, really, but the challenge level is satisfactory if not downright tough. Every few levels you’ll find yourself with a boss stage, or sometimes bonus levels offer super-elites by the truckload, which can be used to farm for plentiful items.

The music is a brilliant piece of retro gorgeousness. It’s an electronic backing which works so well with the game and even perhaps elevates it beyond what it could have been. You’ll feel cool as your wandering around these maps, picking off these robots and robbing them of all of their goodies. It’s not just the background music that should be picked up on as far as sound goes, though; the explosions you cause feel really satisfying, particularly if you’re playing in handheld mode. It’s half-pop, half-boom, and gives an immense sense of satisfaction particularly when the explosion is the last one you need in order to be able to progress to the next level.

But the frustrating bit – die, and you’re going all the way back to the start. I found it a lot easier to get friends involved and take on the levels with co-op. That way, even if your shooting is pretty wayward like mine still is after a ton of practice, you’ve got someone covering your back, and you’re a bit less likely to get swamped by enemies from all angles.

The developers must be commended for their use of colour. While the game does make use of plenty of mindless blasting as you whittle the robot hordes down to size, the vibrant colour palette makes things not too monotonous.

If you enjoy it, NeuroVoider is certainly a game that you’ll be able to come back to another few months down the line. The procedurally-generated level plans make double-dipping not as arduous as it should be. It’s certainly a hardcore-type game, though – if you aren’t prepared to put in the time to get the mechanics down straight, perhaps it isn’t one for you.

As a challenging indie title which offers a good chunk of replayability, NeuroVoider is certainly worth some of your time. Know before you make the purchase that you’re going to be shooting, shooting and more shooting, though, and you should be able to take advantage of it in quick bursts thanks to its pick-up-and-play nature. It’s not a cheap one at £12.99, but it’s an indie game you ought to give a chance.

One thought on “NeuroVoider Review”