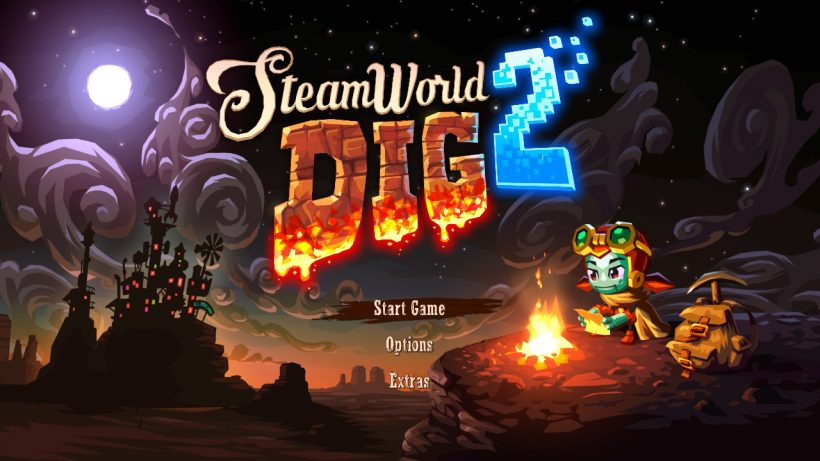 The good, the better and the prettier.

Even if you take into account the fact that the Switch is relatively new, its eShop is becoming more crowded as time goes on (others platforms are in an overpopulated state already). It becomes harder for indie devs to get enough attention for their games, especially when it has to divide space not only with other equally amazing indies but also with bigger and more famous franchises. Still, games such as SteamWorld Dig 2 are given time to shine on both Nintendo’s Directs and Nindies Showcases. If you’re still wondering if it’s worth of such a spotlight – oh, boy! – you’re not really digging how amazing this game is!

If you’ve never heard about the games made by Image & Form before, it is important to know that SteamWorld Dig 2 isn’t only the sequel to the first game in the SteamWorld Dig series, but it also takes place in the well-crafted and ever-expanding SteamWorld universe. These games are all set in an alternative reality in which steam-driven robots are the inhabitants of a Wild West-like world – as well as the space world of the turn-based strategy counterpart that is SteamWorld Heist. Now, SteamWorld Dig 2 returns to the moment that succeeds the events of the first Dig game in order to answer any open questions and fill some gaps on the chronology. 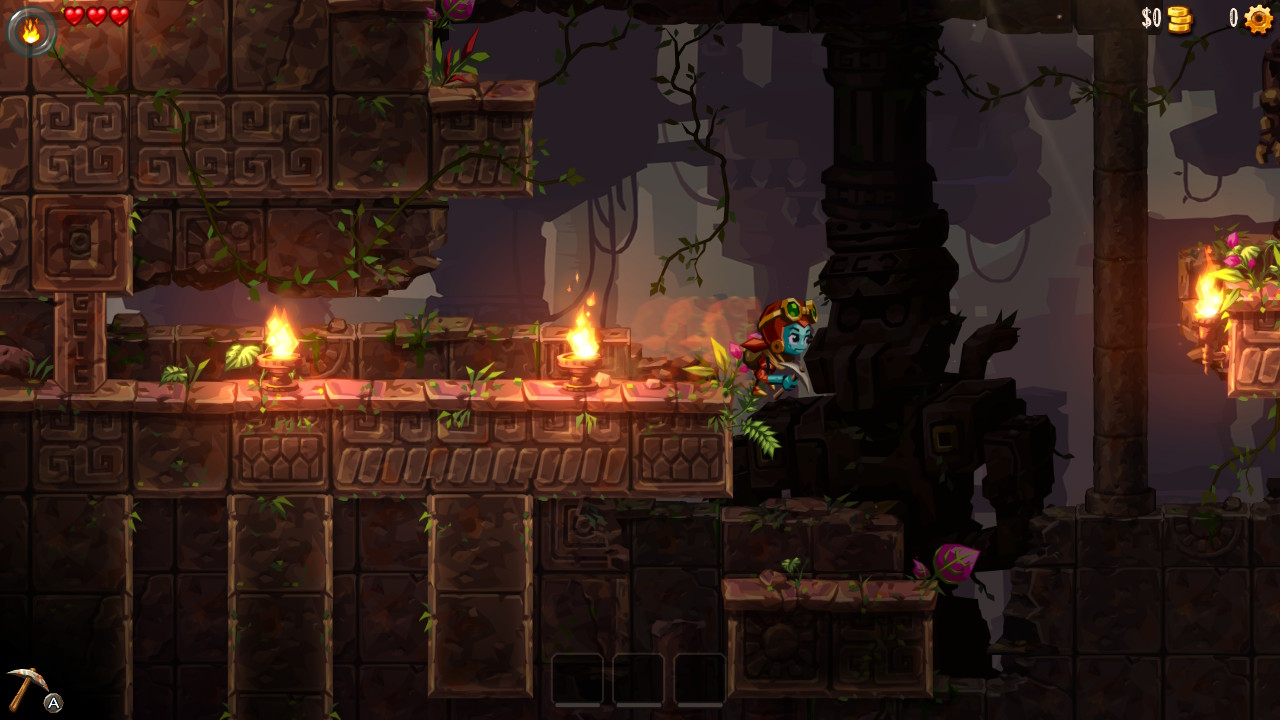 At the very beginning of the game, you learn that Rusty, the quiet and stern protagonist of Dig 1, disappeared mysteriously. Rumours point to the city of El Machino as the place in which he was last seen. Therefore, the player must control the cheerful and charismatic Dorothy, and venture through the mines down the city in the hopes of finding more clues about Rusty’s whereabouts.

To reach the city, though, you must cross a starting tutorial area, in which you’ll learn not only the basics of SteamWorld Dig‘s mechanics but also the little twists that the game has to offer to the platform genre. The basics are there: you can press B to jump – and doing that on a wall allows you to wall-jump to reach higher areas. The A button, then, is used to attack with your pickaxe in any direction you’re facing… and, here’s the catch, you can use it to break part of the scenery. 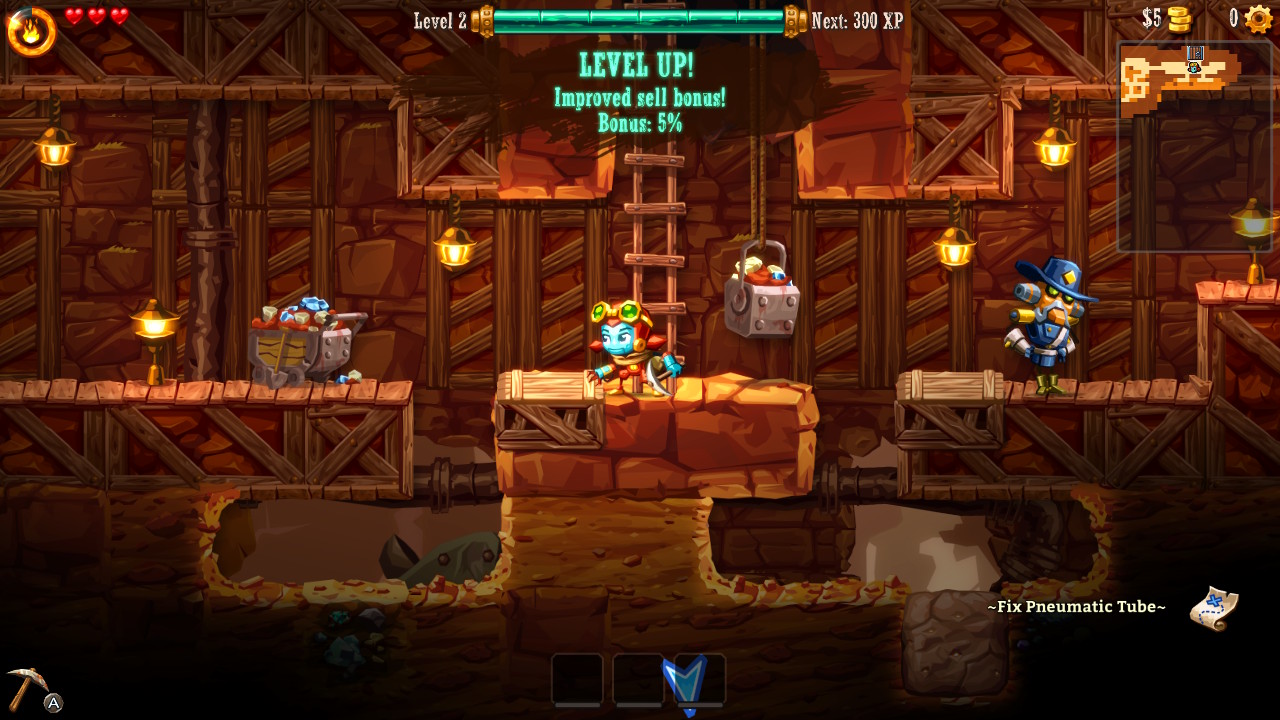 Most of the mines and caves you explore in SteamWorld Dig 2 are formed entirely of blocks. They vary in composition, so some may take more hits to be broken, some may ask for a specific approach or tool, and others are completely indestructible. Consequently, the game has quite the unique mindset for exploring. While it has a more vertical approach for platforming – because you’re constantly getting deeper into the bottom of the mines –, it also demands the player to think about the best way to shape the terrain. As strange as it may sound, for the most part of SteamWorld Dig games, the player has power over the creation of the level design itself.

Don’t leave the room yet if you’re not fond of the openness of creation-based games; SteamWorld Dig 2 is not one of those. Even though you can shape your surroundings, many different things will tailor your path. The many hazards you’ll encounter are just some examples. From acid and lava-filled pools to aggressive fauna and flora, Dorothy must choose the best route to have the upper-hand over the enemies and challenges. Each enemy has its own distinct behavior too, and must be dealt with caution. To make things more complicated, some of them also have power over the environment and can do things such as opening huge pits to make the player susceptible to fall damage. 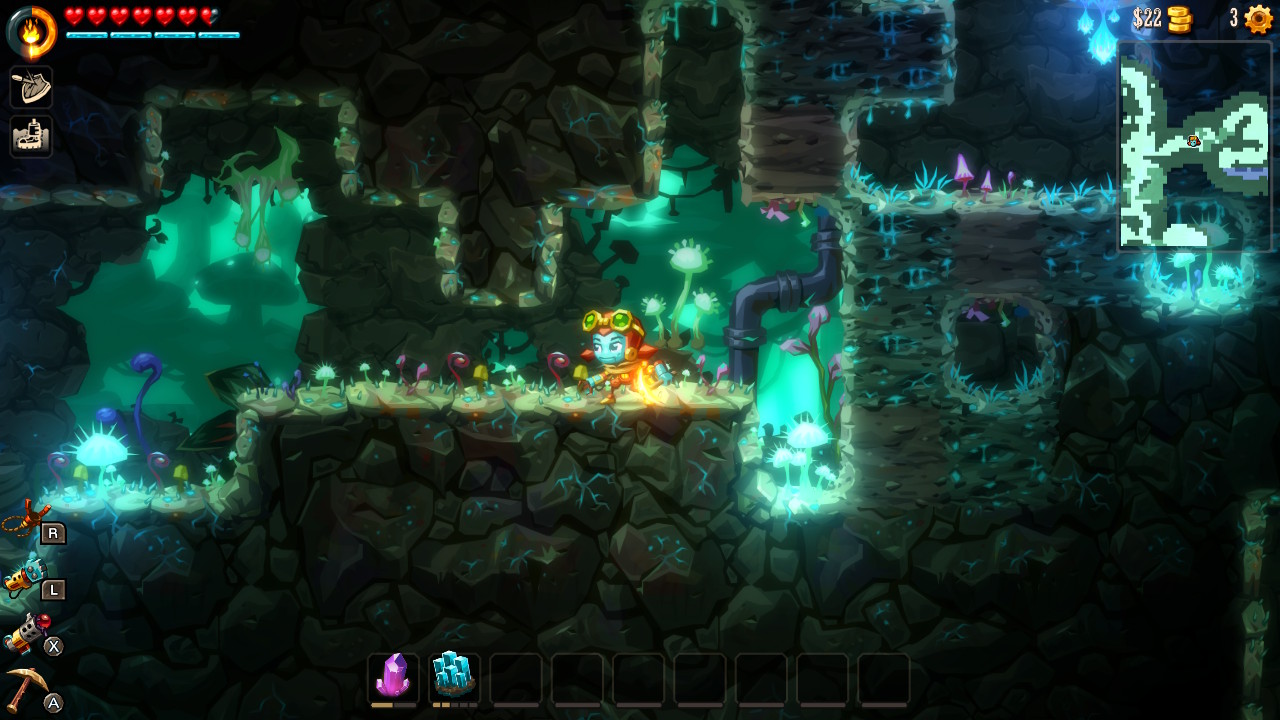 As Dorothy descends through the many mines and caves of SteamWorld Dig 2, the player must also pay attention to the location of the many minerals scattered here and there. By breaking those special blocks, you can collect all sorts of ores and jewels to sell in the city for gold. This in-game currency can be spent on many upgrades for each of your tools and skills. While this may sound like busy-work at first, in fact, it helps with the passing of the game, as you are constantly measuring the risks of going on a little further (if you die, you’ll lose part of the goodies you gathered). Getting those new upgrades is also fundamental for your progress, as it’ll improve your odds of survival, with things like more health points, how strong your pickaxe is, and how many minerals you can carry in total, among many other things.

Concerning your progress, SteamWorld Dig 2 also has a RPG-style level system, so you will get experience by killing enemies and completing quests and, with each level, new upgrades will be available in the city. To allow for more character customization, this second game also has a different category of upgrades based on ‘Cogs’. Those little gears are usually well hidden on the scenario, and by finding them, you can activate a unique set of skills that may change the characteristics of your tools. You have a limited supply of ‘Cogs’, so you need to be constantly choosing which skills to activate for each set moment. 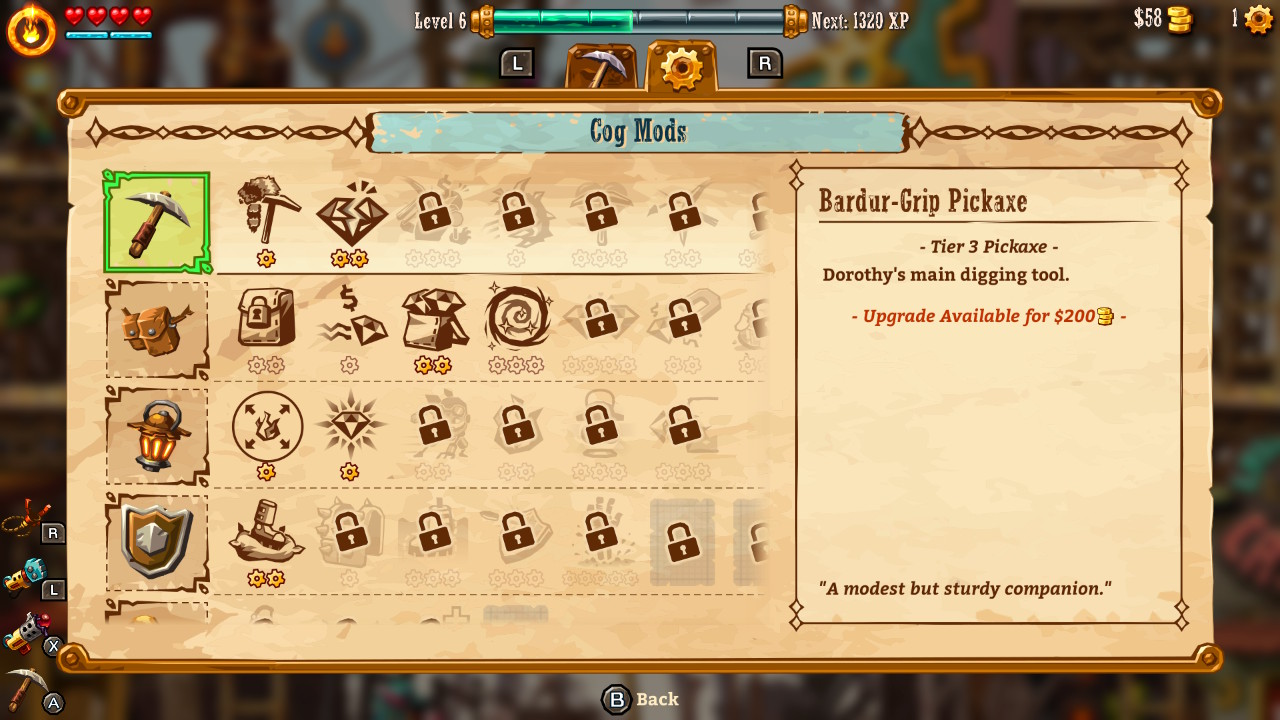 While this progress system matches perfectly with SteamWorld Dig 2‘s exploration mindset (and digging is fun enough by itself), the game is much more than that. In addition to the gigantic interconnected mines that you explore, there is also a huge amount of smaller caves to find during your adventure. They work more like a traditional platform level and demand you to overcome a challenge in a more restricted and controlled scenario. Instead of being limited, though, they are super fun and come in a variety of formats. They feel also like little puzzles that do not only consider the digging possibilities, but also the entirety of Dorothy’s skillset.

Talking about the different skills, it doesn’t take much for Dorothy to broaden her possibilities. I’ll not get into further details about this to not spoil the surprises, but it is a nice addition that SteamWorld Dig 2 follows the best premises of the Metroidvania genre. Therefore, what you can and cannot do in terms of locomotion is dependent on your current skill set. Due to this, you’re constantly getting new upgrades that add new and inventive ways to reach new areas. SteamWorld Dig 2’s ever-present level of quality isn’t exclusive to gameplay only. I must highlight how important was the experience that Image & Form gathered while creating the other SteamWorld games. It is palpable just how much care was given to the many details you see on the art and animation department. SteamWorld Dig 2 has a superb cartoonish art style that just becomes alive when you see it in action. Every single character and enemy – as well as many elements from the environment – has its own subtle animations. Dorothy may be a robot, but it really seems like she’s breathing. Add to that the most on-point music and sound effects that you can ask for, and you have the almost-perfect package that is SteamWorld Dig 2.

If I recall back the days when I played the first SteamWorld Dig, it was a game that I enjoyed due to its pleasant and somewhat relaxant gameplay loop. Now, in contrast, I can say that SteamWorld Dig 2 is not only a better and prettier sequel to an already good game. It is, in fact, a game that I fell in love with, and I could really enter into a discussion or two arguing that it is the best indie game available on the Switch at this moment.

SteamWorld Dig 2 is everything that you may want for a sequel. It takes the digging formula of its predecessor and makes it more fun to play, prettier to look at, and more pleasant to listen to. Fans of both platform and Metroidvania genres will be pleased by its enjoyable gameplay and, even if you’re not into those style of games, it may be worth a try – as it is one of the best indie games released on the Switch.

One thought on “SteamWorld Dig 2 Review”