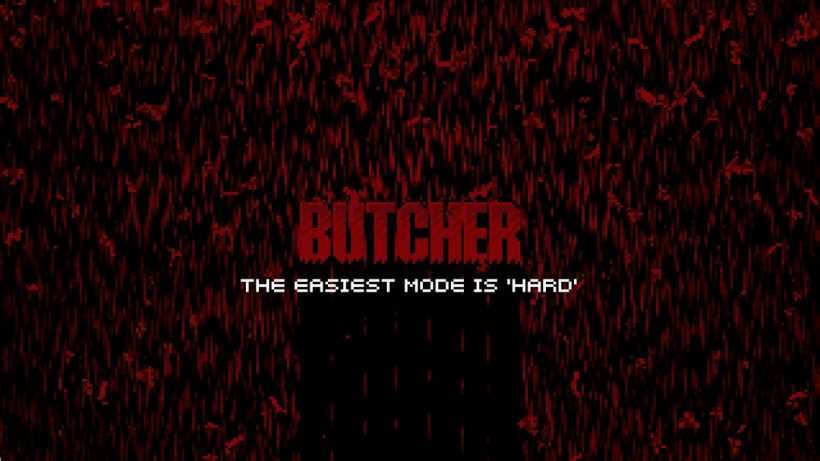 The Nintendo Switch hasn’t had too many early gory-type games. The Binding of Isaac could be one, for sure. But new eShop exclusive release Butcher makes no bones about its grotesque love-in for violence.

The Butcher of the title doesn’t refer to anything associated with meat but is more to do with how our protagonist, if you can call him that, carves through swathes of enemies leaving all manner of blood and gore in his wake. Hooks hang from the ceilings, and enemies you blast away can get caught on them to create some of the more memorable death sights seen on Nintendo’s new console to date.

Your goal is quite literally to obliterate everything in sight. Using the left control stick to move and the right one to aim, the controls handle very similarly to those in last month’s Switch eShop release Neurovoider. Butcher, however, makes more use of jumping between platforms and using the environment for cover as you look to pick off all the enemies in proximity.

Gameplay takes multiple forms – you start off, while avoiding streams of bullets from all sides, almost as an exploration game, working a way through the dungeons, and trying to work out how to collect hard-t0-reach special items. At other times, though, hitting a switch triggers a blastathon, where you’re stuck in an enclosed area and will only be able to progress through eliminating everyone around you.

The game is hard even on its easiest difficulty setting, and the enemies are smart enough to be able to quickly lock their sights onto you as soon as you emerge from any sort of cover. And no matter the enemy, it doesn’t take a lot of hits to deplete your health gauge to empty. You can get extra health pickups which take your gauge even higher than the 100 figure you start off with, but don’t be fooled – this extra health only gives you a fraction more chances at being hit before you’re going to have to start the level over from scratch.

Hitting the X button allows you to cycle through choices of weapons. The chainsaw is, of course, the most-barbaric seeming, but equipping it basically puts you into a suicide mission due to its incredibly short range. A shotgun is also available early on and is quite effective to use when timed correctly, while an automatic gun makes things a little easier but is heavily limited in terms of its ammo capacity.

The 2D, pixelated styling of the game does well for the tenseness and atmosphere, it must be said. But the lack of detail of the character modelling often makes it tough to see exactly what is going on. In the grisly deaths on the hooks, for instance, blood sprays everywhere, and you hear the haunting screams of the enemies you’ve just slain, but it’s not quite clear enough to work out exactly what’s happening. Yes, you could say this is deliberate, so as not to make the game too grotesque, but that explanation doesn’t really wash when you’re already seeing blood going all over the place. I want to see what happened to my victims, dammit!

While not massive, a number of different settings mix the game up a bit every few levels. But ultimately, the core of the action offers more of the same. The arrivals of new weapons and enemies are welcome, but after a while they are no longer game-changers. It remains a game about frantically looking to blow everything away while keeping a sneaky eye open for any collectibles around you.

One thing Butcher does really well is sound. The music is atmospheric and sinister, the sort you’d expect from a bloodbath Hollywood movie. It’s a grisly, demonic sound which really ties into what the game is all about. And the gunshots ripple through the speakers; they honestly must be some of the most realistic-sounding gunfire effects used in gaming.

At £8.99, you can’t really fault Butcher for what it is. It offers an immense, satisfying challenge; it gives constant action and also the memorable usage of blood and gore. It has a nice pick-up-and-play aspect too, so you’d be hard-pressed to find a good reason not to add it to your console catalogue.

If you’re not among the faint-hearted, download Butcher. It’ll test your wits, reflexes and ability to stomach some gore, and is easy to pick up and get stuck into from the start. If you get frustrated at games being too hard, though, perhaps it’s worth sharpening those reflexes elsewhere before taking Butcher on.