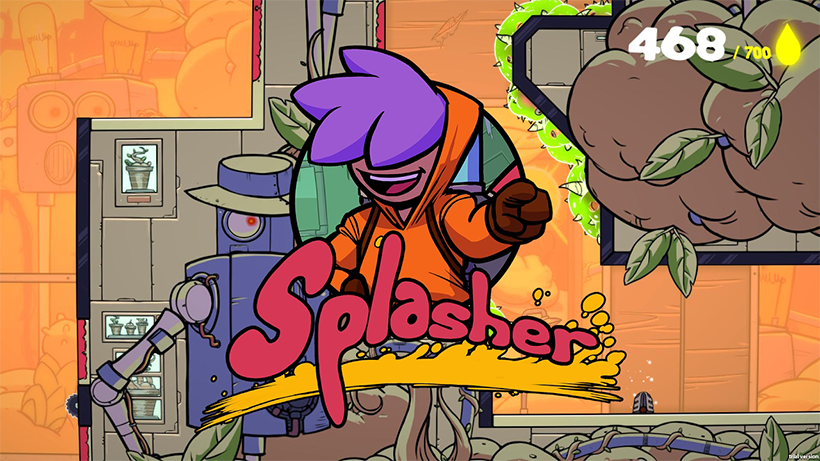 Time to let the kids loose with the paint. 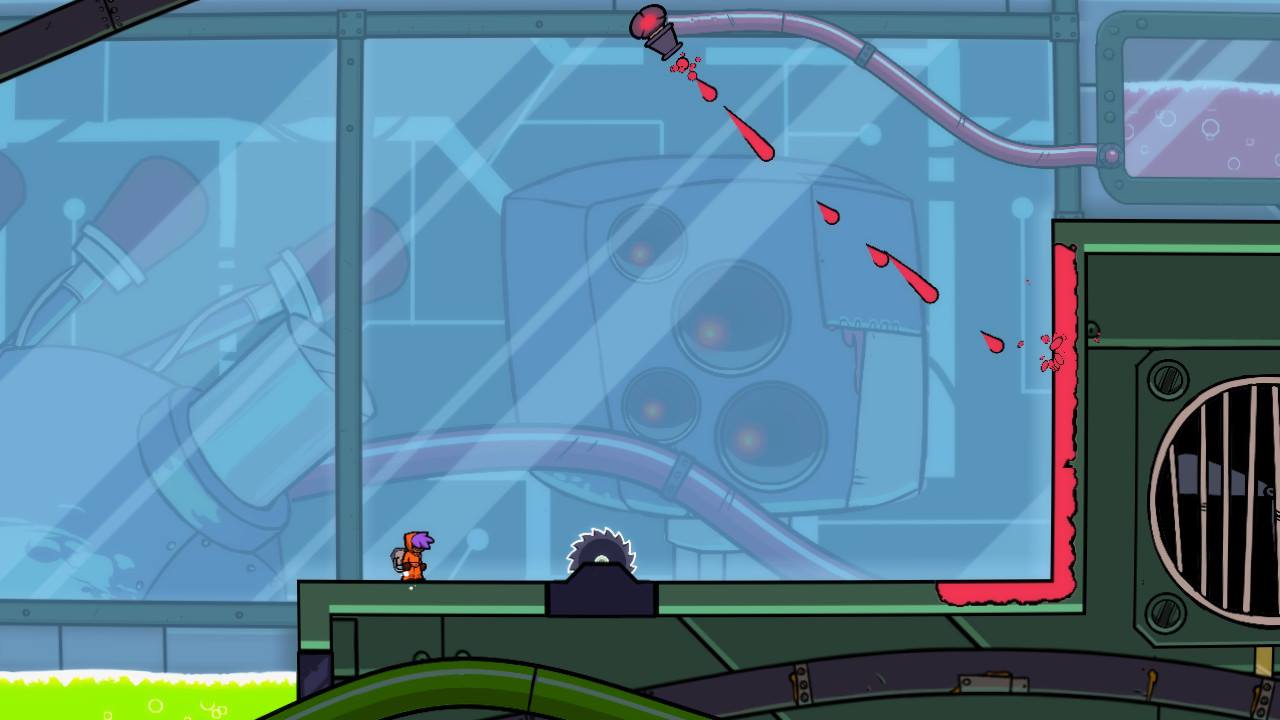 Splasher looks like your run of the mill indie 2D platformer, it has its gimmicks sure, but this game is just really enjoyable to play. It may not be unique but the execution of gameplay here is what helps this game stand out. So, back to those gimmicks. Your special power is your paint gun which sounds lame but thankfully is much better in practice. There are various different colours of paint, each with their own power. Red paint, for example, is sticky – great for running up walls but awful for going fast. You’ll gain the ability to fire these paints from your gun and it becomes a challenge using your paint gun to create a route through the levels. 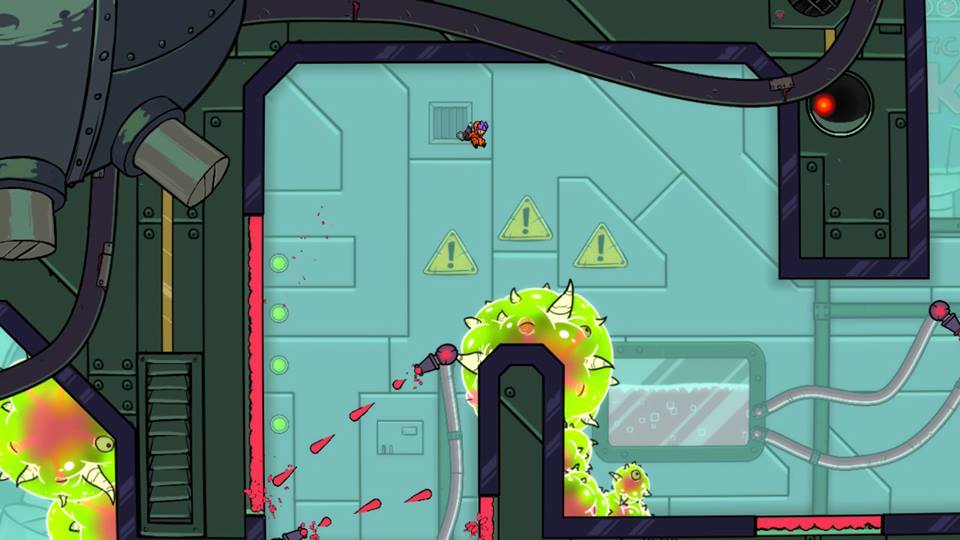 The platforming itself is wonderfully fast and fluid, it almost feels on par with the likes of Rayman. The levels are carefully crafted and each one focuses in on a specific feature and explores it fully, requiring you to understand the ins and outs. The game then utilises this knowledge and builds upon it to really flesh out later levels. One level features a strong wind blowing across the level, it makes your jumps longer and keeps your character moving at all times. You have to tactfully utilise the red paint you have mastered earlier to slow your character down to help navigate the various traps.

All in all the game isn’t particularly hard, most levels are straightforward to get through, though for those looking to challenge their skills a little more there are various workers for you to save (collect) and these are often placed in more difficult to reach areas and, as such, require a bit more precise platforming. Completionists will have their skills tested going through all the levels trying to save all these workers, the only real pain here is the checkpoints. These can be placed far apart in some instances and dying restores the workers to the level so you’d have to re-save them and this can be tricky at the best of times. It works against the feeling of fluidity in the rest of the game but all in all is a minor setback. To emphasise how much the game leans into the fast and fluid style of gameplay, the game also features a speed-run mode which ditches the workers to save and simply tasks you with getting from beginning to end of the level as fast as you can. 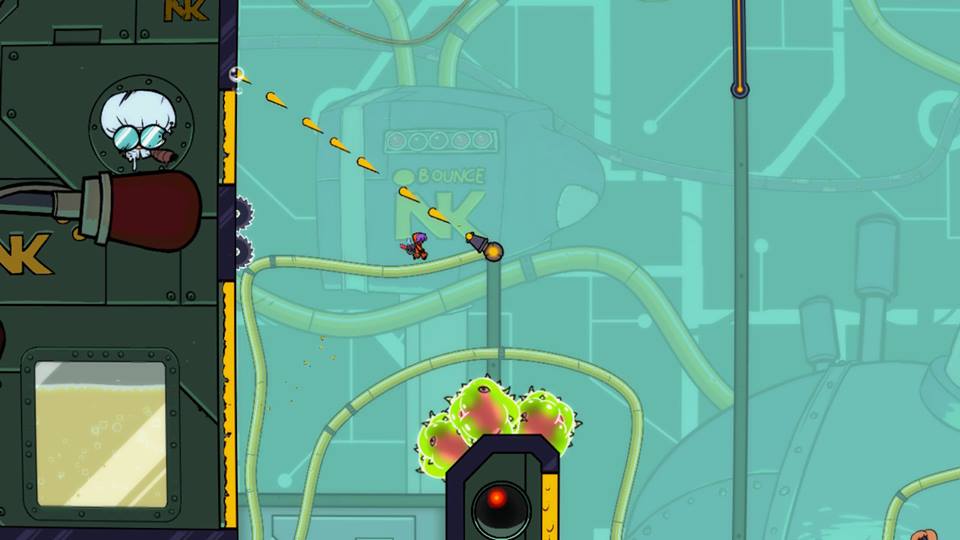 Visually the game looks clean and crisp with its vibrant art style but quickly runs out of fresh looks as the games go on, enemies start to repeat quickly. Levels all have a samey feel as they’re confined to being set in a single factory with seemingly limited variety but these are really minor issues when the gameplay excels as much as it does. I spent more time enjoying the soundtrack than I spent noticing the same robo-bulls (I have no idea why a factory has these either) trying to kill me.

On the whole, Splasher is an excellent example of how a platformer should feel and it seems to take a lot of lessons from the likes of Rayman. I’d personally like to see what could be done with a sequel with a larger scope and, at the end of the day, what better praise can be given than wanting a sequel.

Splasher is a platformer that wears its influences on its sleeve from a story taken straight from Oddworld and gameplay that can almost match Rayman. The game offers a nicely refined platforming experience that really nails the fast and fluid style, the game is a great showcase of how these games should play and the only praise this game needs is that I would like to see a sequel that expands on these ideas.