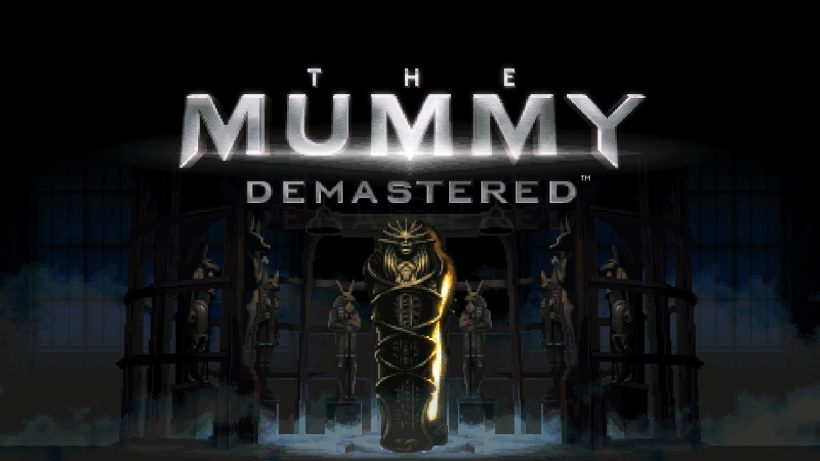 Not your mummy’s metroidvania.

When a video game is based on a movie, there is always a pause for thought about how it’s going to turn out. You always wonder how much of the movie licensing money could have been pumped into making a better game. Enter The Mummy Demastered. WayForward must have been rocked by the reviews that hit the latest The Mummy outing. As far as critics are concerned, it’s not a great film at all. So how does the game stand?

WayForward have shrewdly decided to create their own story with Demastered. Set in caverns beneath London, you have a simple mission: take out the Mummy Princess. It’s more or less the same premise as the film, but set in a metroidvania adventure. Some names are there but you’re just a Prodigum elite agent taking out the evil menace. This is what immediately plays to the game’s strength. Think Goldeneye on the N64. It had the James Bond licence but besides having Bond in it, it was its own game. In a similar way, TMD doesn’t allow itself to get bogged down with the luggage of its licence.

But let’s call a spade a spade here. The Mummy Demastered isn’t quite its own game. Looking at the screenshots, you will probably notice more than a passing resemblance to Super Metroid and Contra III on the SNES. Graphically, these games lend a lot of UI elements to TMD right down to Super Metroid’s minimap with the blue squares. Don’t let this fool you though, there are fresh mechanics and ideas that place the gameplay’s feet firmly on its own two feet.

As you initially descend into London’s caves you are taught basic controls. The levels begin as a linear affair, starting to open up once you begin to recover weapons and artifacts littered throughout the labrynth. At this point, you get the feeling it may be just a run and gun shooter like Contra III. However, The Mummy Demastered now starts to tick all of the boxes for classic metroidvania. Destroyed enemies drop health and ammo while weapons become more destructive and special abilities are gated by evil bosses. Veterans of the genre will immediately spot areas that are inaccessible early on, knowing that later you’ll be able to somehow reach that high ledge or swim down to the reservoir bed.

Your moves are somewhat confined early in the game. There’s no running, so Elite Agent plods around without a real sense of urgency and his jumps leave a lot to be desired. The controls are tight though and you won’t feel that any missed jump or bad move is the game’s fault. Despite having a free-aim button, Elite Agent fires in only 8 directions. It’s handy for shooting downwards, but I guess that this limitation is the price of living in a 16-bit world.

You’re probably going to feel a little hand-held in some sections though, as the game will not allow you to progress too far ahead without the Prodigum director berating you for not completing your current objectives. You need to go back and complete these before moving on. Metroidvania games have to tackle this in different ways, but I felt that this was probably added in to ensure that players couldn’t get themselves into a position in which they couldn’t escape. It’s unfortunate in how it is somewhat jarring.

The respawning of various enemies was also something of an annoyance. Shoot an enemy to clear space for a jump and lo and behold, it’s offspring pops up a few seconds later in the same spot. It’s like Ghouls and Ghosts but without forcing you to pop 20p coins in the machine every 10 seconds to keep going. It adds an artifical difficulty to the game and although I feel that the difficulty of the game is set just right, there must be better ways to execute this.

The 16-bit art style is executed very well. There are some lovely backdrops throughout the levels, which you see initially on the surface area. It also brings with it a charm to the game that is probably my sense of retro nostalgia being tapped into just so. The sound is also implemented very nicely. Rather than being the MIDI or beeps of the consoles from that generation, you get a feeling of those classic Amiga sound mods. The sampling and synths are used to great effect making some stand out punchy and atmospheric tunes.

A nice twist in the game is your death. When you are defeated, your agent succumbs to the evil of the Princess. Now, you’re a new agent who has to go and do battle with your former self to recover all of your items. It’s a pleasant change from the normal fare of going to the save point again but it does have its drawbacks. The battle can be quite a drain on you before a boss battle if that’s where you lost your life in the first place. You can also end up losing another life and then having to fight two zombie agents. This results in that nightmare game mechanic, grinding for health. For whatever reason the developers decided that there is no need for health stations anywhere in the game, resulting in Special Agent having to walk in and out of rooms hoping for a nice health drop. As you gain much needed health tanks, this can take a very long time.

Despite the foibles, The Mummy Demastered has a lot to justify WayForward giving themselves a pat on the back. Whatever you think of the movie, here’s a standalone game that combines rich sound and graphics in a 16-bit aesthetic. It may lack originality in places, but it’s unapologetic and starts to carve its own identity as you progress. You’ll enjoy exploring the expanding world and taking on a varied range or enemies and boss battles. If you want a game that brings the adventure and exploration with guns and challenge, I cannot recommend this enough.

The Mummy Demastered feels less like a movie tie-in and more like a love letter to the metroidvania genre. The art style will appease a retro gamer appetite while it brings some modern elements to keep it fresh and engaging. If you’re a fan of games of this ilk, then it is a must-have purchase. If you’re not sure what metroidvania is, give it a go anyway. You’ll be pleasantly surprised.