Not everything is blanc and noir

Being a cop is hard work. Sure, most people are helpful, law-abiding citizens but others don’t want to snitch to the cops. Hard to blame them, given Cole Phelps’ demeanour when it comes to talking to people. Sure, sometimes he’s sensitive and slow, mindful of the traumas people have been through, but then other times he’s driving on the pavement and accusing innocent people of murder just to pry a reaction from them.

With L.A. Noire, we learn that sometimes being a bit rude and forceful is, at times, exactly what a cop has to do to get the information they want. Cole Phelps, a former Marine who fought in Okinawa during World War II, has turned to the comparatively quiet life dealing with mobsters and petty thieves in Hollywoodland. Of course, the seedy underbelly of showbusiness runs deep, and Phelps soon learns a lesson or two about the “quiet life.” 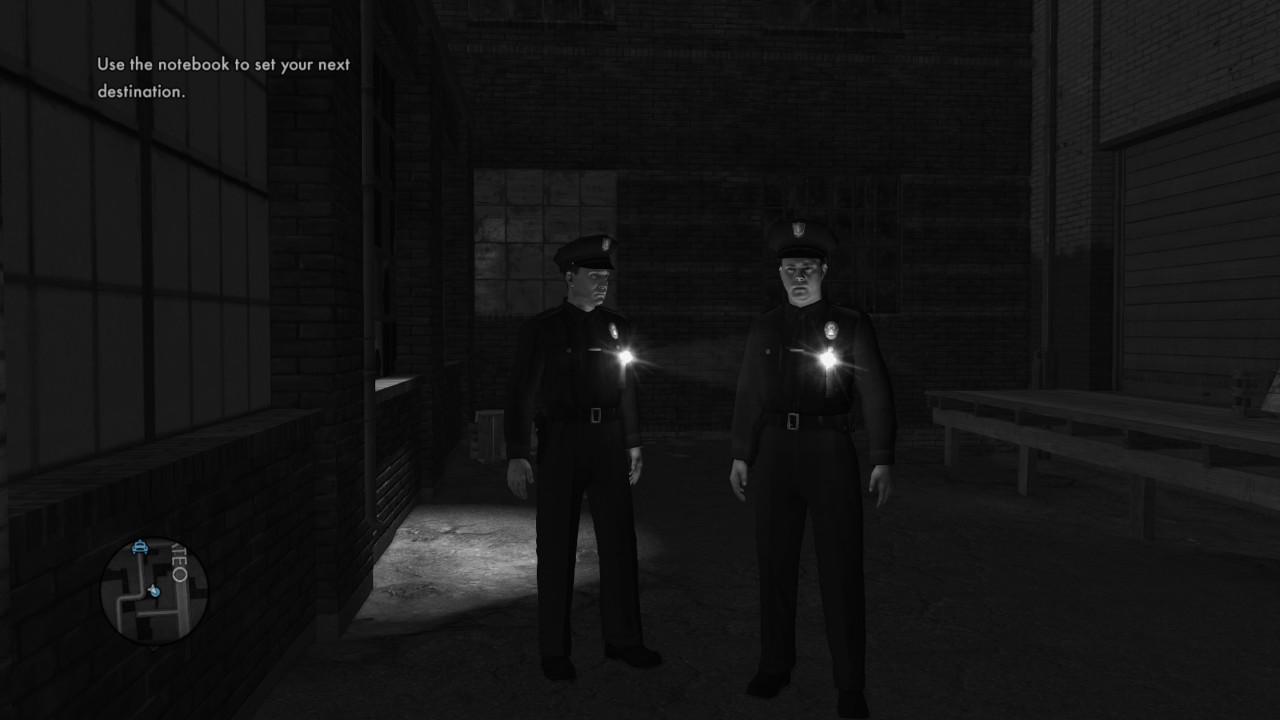 L.A. Noire is a fun Grand Theft Auto-style crime drama, told alternatively from the perspective of the law man, instead of the career criminal. This causes a few issues of its own, but for the most part, L.A .Noire tells a fascinating story about a morally grey cast and their pursuit of their own personal brand of justice.

The biggest problem with being built on the same foundations of Grand Theft Auto is that many of the mechanics of that world just don’t translate properly when you play as an upstanding citizen. This can either be a minor issue, such as being forced to gun down petty thieves, without any option of non-lethal takedowns, or far more serious, such as removing much of the interactivity available in the world. It’s truly staggering how lifeless L.A. Noire’s world actually feels in comparison to a GTA game, where each NPC walking the streets can offer a different interaction. Here, each NPC walking the street is set to walk, and then run away if you attempt to run them over. That’s pretty much it. 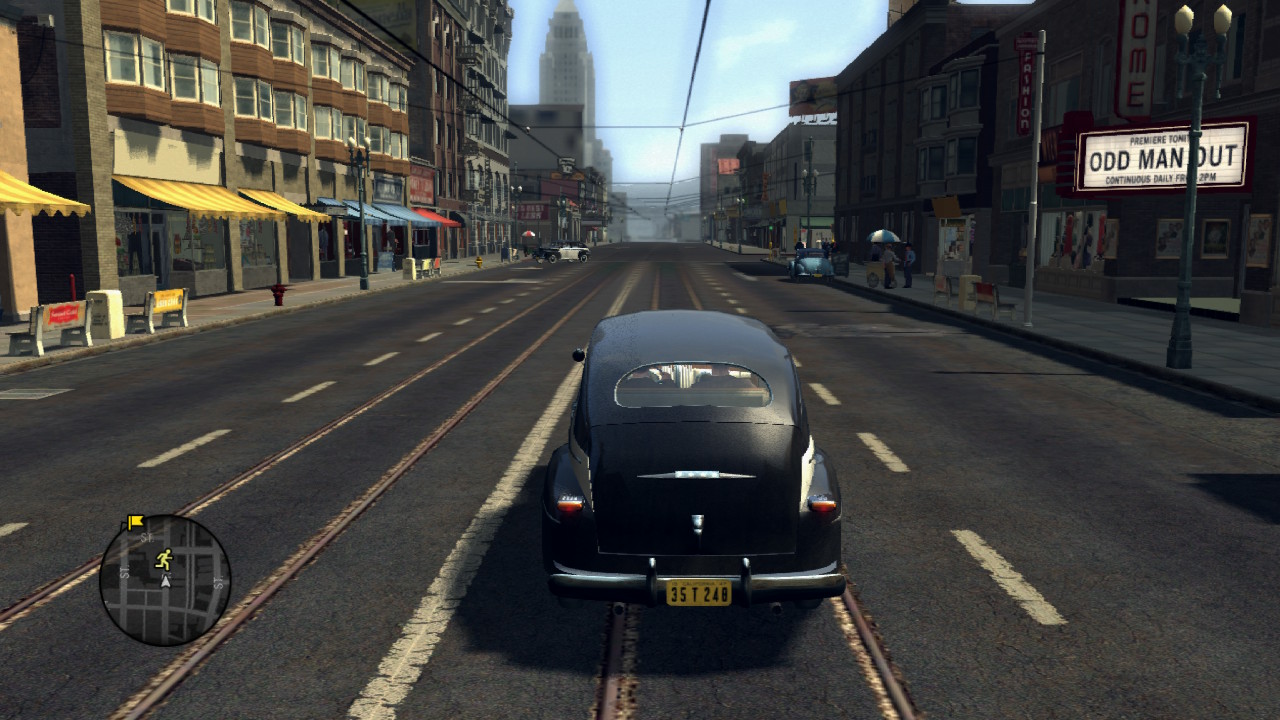 The side missions are a massive missed opportunity, too. There are 40 side missions in the game, and they can only be accessed while driving your patrol car. The radio might call for back up, and then you have the option of backing them up. These missions can be fun or funny, but more often than not end up being a shoot out from a rooftop or in a car park. The biggest problem with them though, is that they must be accessed from your patrol car; and you cannot just jump into a side mission – you have to wait for the radio to give you the opportunity. This would be fine, jumping into side missions while driving about the city, if the game didn’t actively discourage you from driving about the city.

It’s yet another leftover from the GTA foundations of L.A. Noire. In those games, exploring the city and interacting with NPCs is a key mechanic, one you can spend hours on either robbing people to cause trouble or hunting down special collectables. Here, driving is bad, because accidentally crashing or scraping up against another vehicle will see the police department charged at the end of your case, and will deduct points from your total score. To counteract this, you can have your partner drive around the city, who will never crash, and will essentially fast travel you to each mission. Of course, if your partner drives, you’ll never be able to activate side missions – but they will take their time so you can hear some banter between partners. 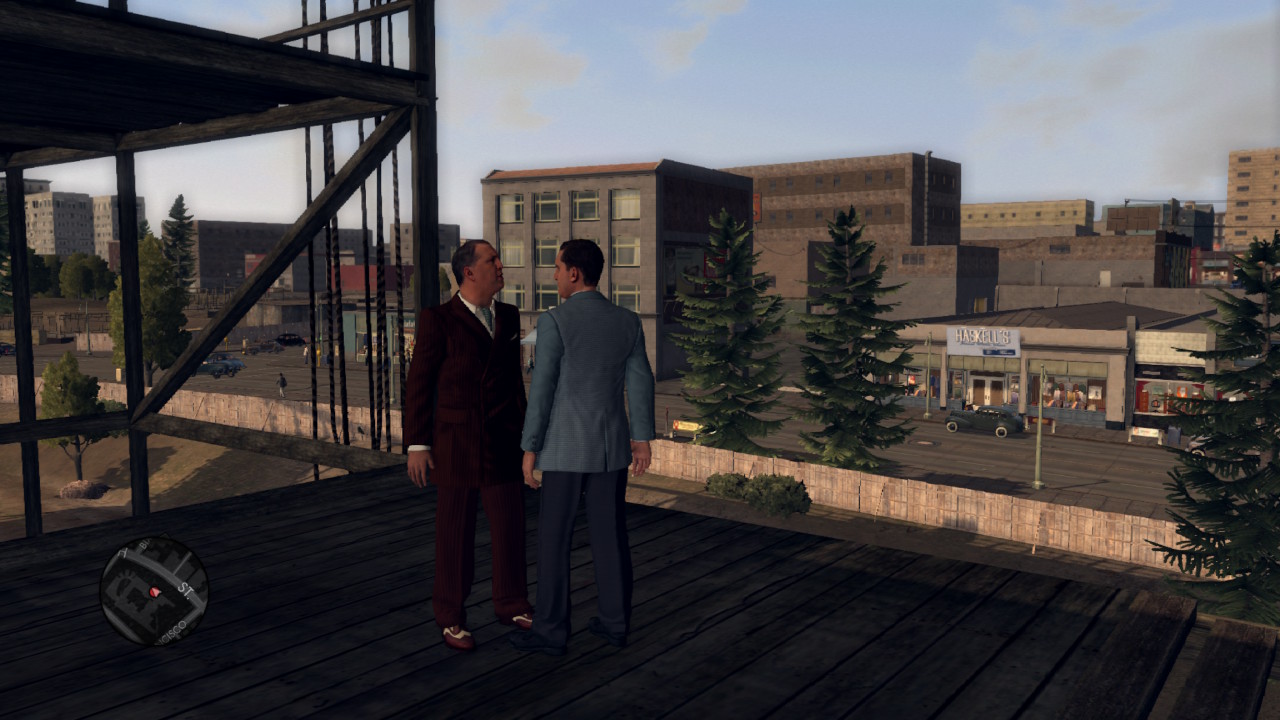 L.A. Noire’s appeal isn’t in its action sequences though, it’s in detective work, pure and simple. You’ll be looking at lacerations on dead bodies and pulling evidence out of the trash in order to piece together clues and find out what happened, in addition to interrogating witnesses, of course. Interrogations are the main draw of L.A. Noire, back when it first released the detailed facial animations and expressions were state of the art and, for the most part, hold up very well today. After asking questions, you’ll be analysing your witness’ face and body language to deduce whether or not they have something to hide. At first this is quite novel, until you start to understand exactly how the developers built these interrogations. Essentially, if your witness is making unflinching eye contact and hardly moves their head, you respond with Good Cop. Otherwise, you Accuse, see if you have appropriate evidence, and if you don’t, you back out of the accusation and pick Bad Cop. Rinse and repeat until you’ve found your perpetrator.

The interrogations, and the distinction between the Good Cop and the Bad Cop feel so integral to the game that it boggles the mind that this isn’t taken a step further. Sure, some missions have different outcomes, or different ways of solving a case, but never a clear-cut good or bad ending, so to speak. Sure, in a certain mission you might accidentally have a suspect fall to his death, instead of being arrested, but the fact that there were even different possibilities or eventualities isn’t clear at any point. It feels like the decisions you make hold very little value, because this is still a linear story, and your actions aren’t allowed to change that story too much. 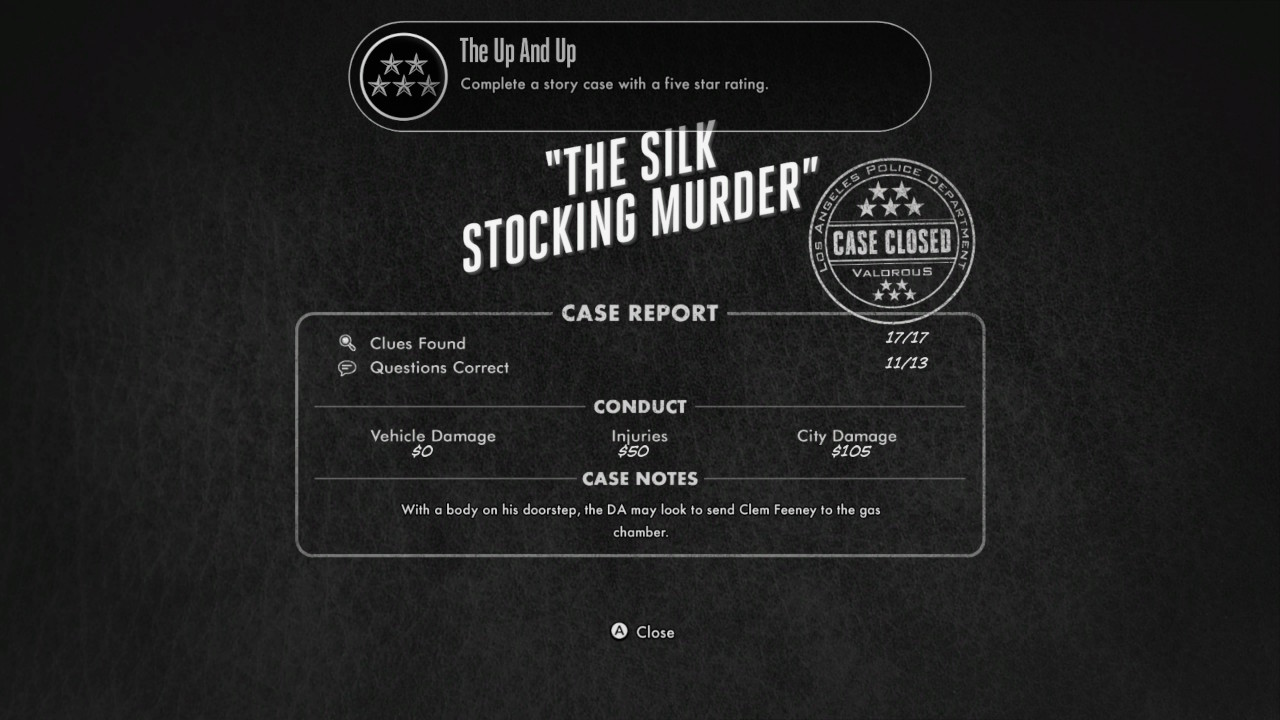 But, despite all its problems, L.A. Noire does things no other game has, either since or before its original release. It’s a genuinely unique take on the cop genre, and its slow methodical approach to “action” is a welcome change. Sometimes tension can be built through dialogue instead of explosive setpieces, and L.A. Noire understands this so much better than most games, then or now.

L.A. Noire isn’t quite an action blockbuster, but more of a serialised crime caper. The slow approach and moments of intrigue are welcome, and ends on an incredibly memorable note. DLC fills out the experience for Phelps fans.

One thought on “L.A. Noire Review”