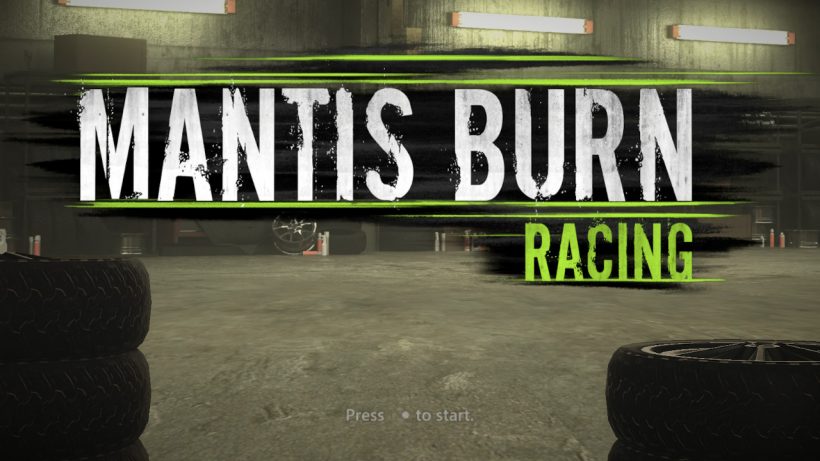 Though the genre has been around longer than Mario, Mantis Burn Racing doesn’t shy away from delivering some new tricks to top-down racing. Combined with the Switch, there’s some very clever ways it brings the fun to the hybrid.

The game is initially simple. A go button, a brake button and a boost button which is charged up through your race by performing drifts and jumps. Through the career mode, there are a number of seasons that you work through. Winning races and achieving goals lets you level-up, unlocking vehicles, bonuses and more seasons. You choose which vehicles to spend your upgrades on, while adding extra slots by spending ‘G’, the games’ in-game currency. The rookie mode starts things off deceptively simple but once you’re a few seasons in you’ll be thankful for those upgrades. This is a delicate balancing act. Upgrade speed, then you may need to get extra traction. It’s a light RPG upgrade system.

The multiplayer is definitely the real treat in Mantis Burn Racing. Go head-to-head undocked and you have the ability to use “tabletop mode”, rotating each player’s view so that you can lay the Switch flat with each player sitting either side looking down at their half. This ratio of the screen works nicely and it fits the top-down style well. Of course, classic split-screen is available with up to 4 players while local wireless and online play supports up to 8 players. Even if you can’t pin enough friends down, online leaderboards are available to hone those skills.

The 3D circuits are beautifully realised, looking great with lighting effects and tiny details throughout. The soundtrack isn’t the most exciting but the sound effects feel very satisfying – especially as it syncs with the HD rumble as you drift around bends or bang a competitor’s car to bounce away from in a tight bend.

The Switch version gives you the option of playing cross-platform, and the first time you go online you’re (thankfully) asked if you would like this on or off. As you will still be upgrading your vehicles you may want that off. This release also brings the previously released DLC in the Switch release as well as motion controls if you feel that way inclined.

One thing that’s worth noting is that this is no Mario Kart. The difficulty is such that if you fall behind you will have your work cut out to catch up to the leader. The AI runs around at its own pace and there are no playing field levellers to forgive you.

Hidden away at the end of the season list is a battle mode. This equips battle cars with machine guns and mines. If you want a bit more out of your racing, this is worth looking into as it breaks up the gameplay with a different style of racing. The AI is left wanting in some cases however but it’s fun and frantic with buddies.

There are lots of other neat touches that bring the icing on the cake. Different times of day and different weather conditions which make your cars behave differently are all small elements that shine through.

Sure, Mantis Burn Racing could benefit with a few more tracks and cars, but it brings a polished and enjoyable racer to the Switch. The circuits are short enough to dip in and out on the go while the difficulty curve keeps you practising and improving. Mantis Burn Racing is a hot driving game on the Switch and if you love a good racer then you need this in your home screen.

Mantis Burn Racing delivers on what it sets out to do: It’s a fun, satisfying racing game with plenty of multiplayer options to keep your interest. The circuits have their own characteristics and the different race modes and classes of vehicle keep the game changing just enough to keep you coming back for more.

It’s top-down racing at its best and being on the Nintendo Switch fits the game like a driving glove.