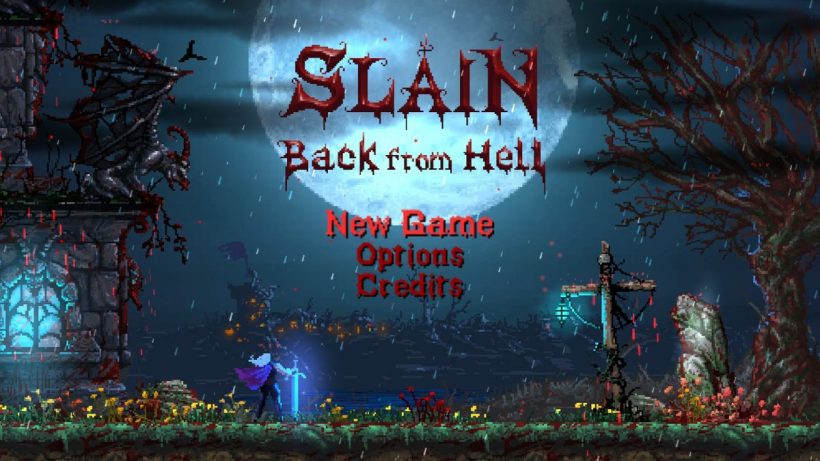 A pain to be slain.

Most hardcore gamers love a solid challenge, and monster-killing platformer Slain certainly offers that. Of course, it’s got to be noted that this is all very reminiscent of Castlevania both in terms of visuals and in terms of theme. But the fact that this steep difficulty is as good as immediate as soon as you start the game is something which, I’m afraid to say, hampers the amount of fun most of you are going to get from playing it.

The controls should be simple, but they aren’t as effective as they need to be. A flaw that immediately stands out is that some enemies fire projectiles at you, which in theory you should be able to swing your sword to deflect back to whence they came. But these projectiles can sale at you even when these enemies are off the screen, leaving you with little time to deal with them. Dodging and ducking won’t work, as you’re going to be hit by them anyway, but the timing of the sword swings just isn’t helpful. You have to time them absolutely perfectly or you’re losing some health.

That’s not the only control issue. Hitting the L button should drag you away from the action by a few inches in order to avoid taking damage, but it rarely ever works. You can be tapping the sword-swing button to deal out some offence, get whacked by enemies who are shrugging off your sword strikes and still not be able to get out of the way without taking a whack. Flying enemies are a pain too – they have very unpredictable flight patterns, and it’s so tough to hit them with the not-very-manouevrable sword.

I love a game with challenge, I really do – but at least give us the satisfaction of being able to get through an entire level without taking inevitable damage.  It makes me think of Wii U/3DS title Angry Video Game Nerd Adventures, where the difficulty was ramped all the way up, but it was an enjoyable difficulty, not one which had you feeling you weren’t making any sort of progression and therefore putting you off.

Fortunately, there are checkpoints which replenish your health and mana (mana can be used to unleash some special attacks, which are helpful but tough to pull off), but they’re by no means plentiful. Later on in the game your weapons get more destructive and brightly-coloured – but you’re going to have to try really hard early on if you’re going to see them.

The game is presented in some nice pixelated visuals, all of which will invoke nostalgia of the days you spent blasting through these types of games on the NES and SNES. But this actually hurts it in some sections, particularly in instances were one-hit-kill spikes will surge out of the ground with seemingly no warning whatsoever. I was playing on a very large TV, so you think there’d be no squinting needed to spot them, but it’s intensely frustrating to have just negotiated a difficult series of relentless enemies only to be obliterated when you thought it was safe just to simply walk forward. The heavy metal soundtrack is exactly what you want, but the looks and sound aren’t enough when they’re let down by the gameplay.

If you like your games unforgiving, this one’s for you – but be prepared for a lot of frustration, and not always the good kind.

Slain: Back From Hell

Despite the very pleasing sound and visuals, Slain is just too unforgiving to be as fun as it should be. I’m glad I’ve finished it, because those damned flying enemies swooping down on my are giving me nightmares.