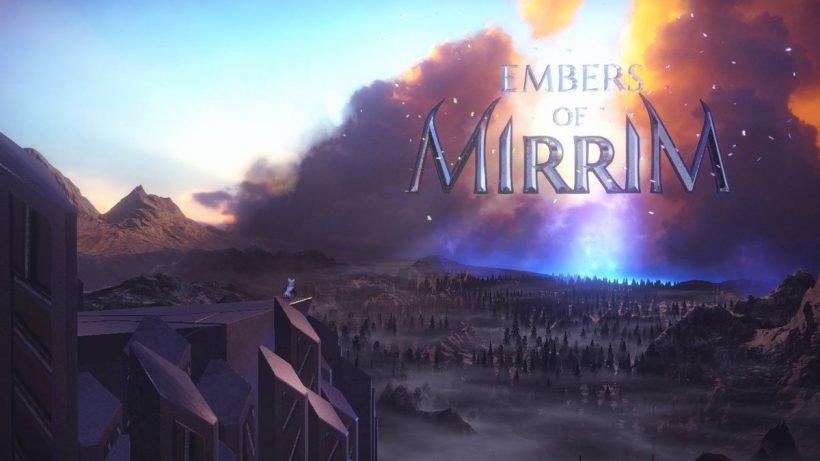 Will these embers set the world alight?

It isn’t too often that you get eShop platformers from indie developers who present luscious expanding backgrounds and environments, and for that reason Embers of Mirrim is immediately quite striking.

The game is beautiful, it must be said. From the water rapids, to the underground caverns, to simply jumping from stage to stage with the sun setting in the distance. More of this please, indie developers.

You take control of a couple of big cat-lizard type creatures, and a tutorial with both has you taking on some very standard platforming action, jumping from ledge to ledge, learning a ground-pound attack and, slightly more challenging, timing some jumps to make your way through river rapids. It’s when the two animals meet that the game really gets underway, though. A series of events which I won’t go into too much detail on for fear of spoilers ends in the two being able to turn themselves into embers, which mean they can turn into a circle of light and sail in any given direction so long as they don’t stray too far from one another and they have the power needed to do so.

It’s here where the game’s puzzle elements come into play. You negotiate these ember sections by pulling on each trigger and then using both of the control sticks to control each of the two embers separately. Then, you need to guide them around obstacles, almost turning yourself cross-eyed in the process as you try to avoid obstacles on either side of the screen. For the most part, each cat will have a mesh-like area which only their colour can enter – mess it up and put the wrong colour towards the wrong area and you might have to start over. Your hand to eye coordination needs to be pinpoint, or you’ll find yourself running out of energy and having to start the sequence all over again.

There are very few enemies for how long the game is – your main worry is going to be negotiating the twin-stick sections. Your fingers will want to do things that your brain doesn’t, and especially when the two embers cross paths and switch sides, it’s a bit disorientating when you’re trying to reverse them back to normal only to see them pull further apart from each other. A few boss battles are included to spice things up, but they’re nowhere near as hard as the twin-stick puzzle sections. They all include dodging attacks before performing a ground pound at the opportune time.

Fortunately, the game is generous with its checkpoints – you’ll usually be able to restart immediately where you fell off the stage, or messed up a puzzle. That’s handy given how long some of the levels are – and I’d argue that overall the game is slightly too long. Seeing the final boss battle come along was a bit of a relief, because having the amount of uninterrupted concentration required by the twin-stick puzzle sequences is taxing when there’s no real story there to pull you along.

There are not many bad things to say about Embers of Mirrim – the only issue is that it doesn’t quite blow you away as a platformer gameplay-wise compared to how the visuals do. A bit more story and personality would have helped – but it’s solid, if unspectacular.

Embers of Mirrim offers some solid, clever and challenging platform action. If only it had a more gripping story, or something else which drew you into the characters it might have been a bit more memorable.