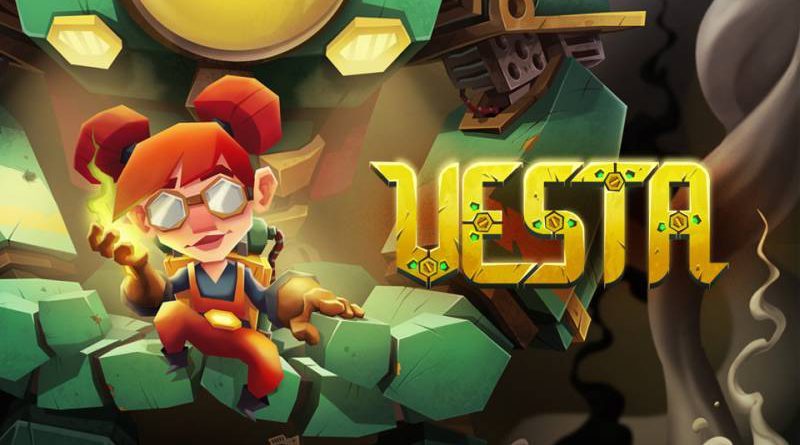 Vesta is a steampunk sci-fi puzzle game from developer FinalBoss Games starring an adorable girl and her equally adorable robot buddy. Set in a somewhat rundown urban facility, it’s a game that looks lovely and shows some considerable promise but unfortunately struggles to maintain much interest throughout its campaign thanks to some fairly uninspired puzzles.

Presented from an isometric viewpoint, you control Vesta as she explores the abandoned environments taken over by deadly robot enemies. It’s up to you to solve the various puzzles along the way whilst avoiding immediate death from the mechanised inhabitants. The game’s storyline is fairly basic for the most part, but the cutscenes themselves really are lovely. They’re presented as a digital comic book, and the illustrations here show off a confident art style that extends to the gameplay itself. The levels themselves look pretty great for the most part, with a wash of bright green predominantly covering the environment. As you move throughout the levels, blurred girders and pipes move into the foreground, creating a brilliant sense of space and perspective in an otherwise purely isometric viewpoint. Character design is also relatively strong, although a bit more variety with some of the robotic characters would have been nice.

The game’s puzzles mainly consist of transporting energy from one point to another, thereby activating various environmental platforms. You’ll be sprinting across moving platforms across deadly chasms and moving blocks across conveyor belts in an effort to progress through the story. It’s fun at first but soon loses its spark through repetition. Additionally, you’ll frequently find yourself progressing through a level without much hassle, only to find yourself missing a vital source of energy, requiring you to backtrack right back to the start. It’s incredibly frustrating and completely halts the game’s sense of progression. You’ll also be making a lot of use of your robotic pal called ‘Droid’, who utilises his size and weaponry to help Vesta in her journey. You’ll come across a multitude of brutal enemies along your way who will fire at you and chase you with little discrimination. By using Droid, you can keep these enemies at bay most of the time. You can also use his considerable size to move blocks out of the way or even hurl Vesta across pools of acid littering the environment. Later on in the game, you’ll need to split with Droid and assist each other from afar – it’s a nice progression of the core gameplay hook, and the difficulty curve is relatively easy going for the most part.

Perhaps the game’s most disappointing aspect is the control scheme itself. I’m not sure if it’s a result of the isometric viewpoint, or just poor execution in general, but I’d often find myself misjudging jumps or dodges, resulting in multiple unnecessary deaths. Droid’s arm cannon can also be a touch more fiddly than it needs to be, making it difficult to aim properly at enemies or bosses. It’s a niggling concern that never really left me, but I suspect this issue will vary from player to player.

Vesta is a good game let down by some poor puzzle design. The core gameplay got pretty repetitive as time went on, but I must admit that I did have fun with it. I’d recommend trying it out during some eShop downtime.

Vesta is an intriguing puzzle game that absolutely won’t set the world on fire, but if you’re after a quirky experience with some clear inspiration from Zelda, you can’t go wrong here.