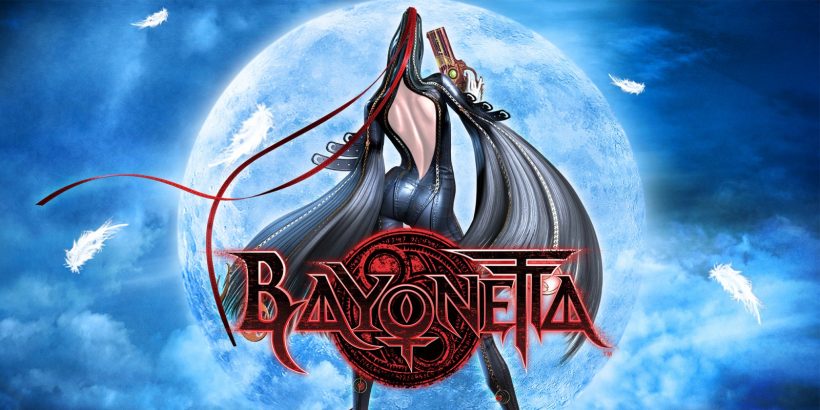 Prepare to be bewitched.

When Bayonetta first launched on the Xbox 360 and PlayStation 3 way back in 2009, it was fairly safe to assume that – much like its contemporaries Devil May Cry and Dante’s Inferno – it probably wouldn’t see the light of day on a Nintendo system. Yet here we are in 2018, nearly a decade after the original’s release, and not only do we have both Bayonetta and Bayonetta 2 on Wii U and Switch, but also the promise of a third title coming exclusively to the hybrid platform in the future. Platinum Games’ action-adventure has become one of Nintendo’s most valued third-party properties, but how does the first game hold up after such a significant period of time? Let’s find out.

Directed by famed developer and Twitter extraordinaire Hideki Kamiya, Bayonetta is a game of pure indulgence, displaying a dizzying amount of style and substance throughout the entire campaign. You take control of the eponymous Bayonetta, an Umbra Witch endowed with remarkable abilities, reawakened after 500 years with little memory of who she is. In the fictional city of Vigrid, Bayonetta embarks on a journey of self-discovery, utilising her destructive talents to eradicate a multitude of angelic enemies along the way. 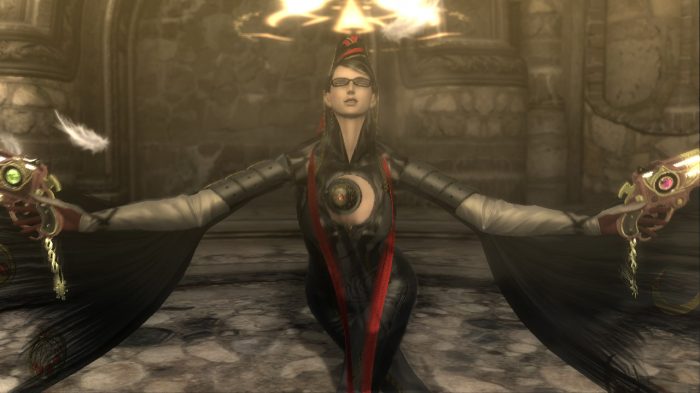 The character of Bayonetta – and, by extension, the game itself – is unashamedly over-the-top, which may actually put off a few newcomers. If you thought games like Devil May Cry were overly camp in nature, then you’re not prepared for what Bayonetta has to offer. Our heroine has no qualms with prancing around in a skin-tight suit, and whilst her portrayal may initially seem like a poor representation of women, Bayonetta is actually an incredibly powerful woman. She displays a confidence that is instantly magnetic, and she often makes the men around her look like utter fools. The sheer joy she exhibits in dispatching her enemies is a delight to behold, and this extends to the gameplay itself. Rest assured, Bayonetta is a game that will test your resolve and skill as a gamer, but it really wants you to have fun along the way.

The gameplay may initially seem fairly standard for an action-adventure game, with basic attacks and heavy attacks making up the bulk of Bayonetta’s move set. Digging deeper, however, will reveal a multitude of wonderful elements designed to help you unleash devastating attacks. Your most valuable asset is, undoubtedly, ‘Witch Time’ – if you manage to dodge an enemy’s attack at just the right time, you’ll activate a brief moment of slow down, allowing you a convenient opening to deal additional damage. You’ll come to rely on this throughout your journey, and it becomes essential for your survival against some of the game’s more intimidating bosses. 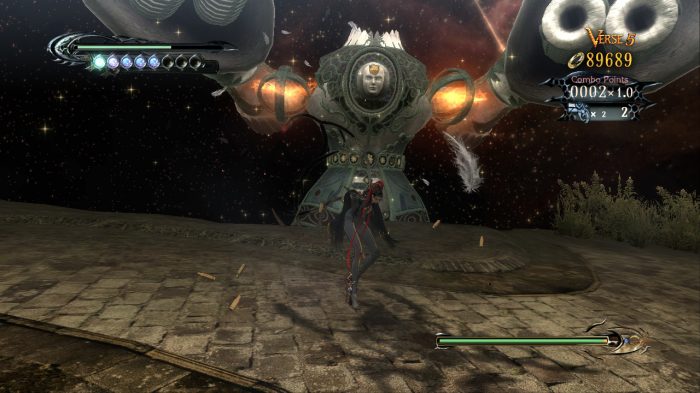 In addition to close-range attacks, Bayonetta also utilises four automatic handguns, allowing you to fend off enemies from afar and extend your attacks to deal more damage. Bayonetta can cartwheel and backflip her way around the environment with ease, and combining both close-range and long-range attacks to chain together combos is an absolute delight from start to finish.

As a final glorious flourish to the excellent combat, Bayonetta can use her hair (yes, her hair) to call upon demonic creatures to bring a final end to the Umbran Witch’s enemies. These sequences consist of QTE events in which you must bash a certain button at top speed to increase a damage/points gauge. This might sound boring, but the sequences are so well paced and so ridiculous that they never outstay their welcome. One of the more outrageous moments consists of a set of humanoid demonic hands playing volleyball with a spherical enemy before pummelling it to a gory pulp. Wonderful stuff! 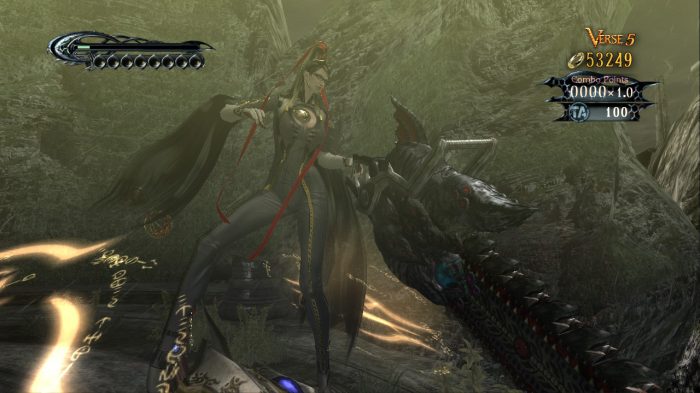 Should you choose to do so, you can coast through Bayonetta without worrying too much about your own performance. However, you’ll be missing out on a lot of potential replayability. All major fight scenes in the game end with a score based on your ability to dispatch enemies in swift fashion whilst minimising your own damage. You’ll be granted a medal ranging from ‘pure platinum’ all the way down to ‘stone’. These are accumulated at the end of a chapter and you’re awarded an overall score for your performance. Rest assured, Bayonetta is a difficult game, and newcomers, in particular, will gain plenty of stone medals, but the ability to replay chapters allows you to hone your abilities and increase your score over time. Trust me, Bayonetta is such a fun game, you won’t mind going back over and over again – it’s really that good. On the other hand, veterans of the franchise will likely gain some fairly respectable scores from the get-go, and the inability to increase the difficulty above ‘normal’ during the first playthrough is a glaringly unfortunate omission.

For the most part, Bayonetta’s visuals are brilliant. The character design and level design remains consistently stellar throughout, with some of the game’s bosses filling the screen – I guarantee you’ll be left breathless at some of the title’s more ambitious spectacles. Unfortunately, the game was originally released during a time when developers were apparently obsessed with the colour brown, and the game sadly suffers from a lack of colour throughout. It’s not a major issue, but it would have been nice if Platinum Games went back to bring the game’s visuals more on parity with its sequel. 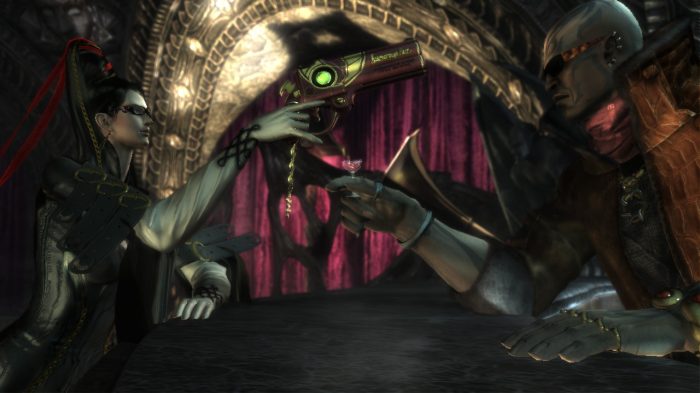 When Bayonetta initially came to the Wii U, it brought with it some glorious Ninty-themed costumes, and these are all present in the Switch version. You can dress up as either Metroid’s Samus, The Legend of Zelda’s Link, or the Mushroom Kingdom’s Peach/Daisy. All costumes come with their own quirky little perks – for example, the Link costume turns all of the game’s currency into Rupees. I won’t spoil the other surprises for you, but Nintendo fans will love these little Easter Eggs.

Bayonetta was, and still is, one of the finest action games ever created. Its flawless pacing and outrageously over-the-top gameplay is a joy to experience, and with the title running at a consistent 60FPS throughout, you’ll be hard-pressed to find a better example elsewhere – except perhaps its own sequel. Minor issues with visuals and perhaps an overreliance on QTEs do little to detract from the overall experience – I urge you to buy this game immediately.

Bayonetta is a stellar action-adventure game oozing with style and substance from start to finish. Newcomers may be put off by the portrayal of its title character, and the visuals are definitely starting to show their age, but the gameplay remains consistently brilliant throughout. A must-buy!