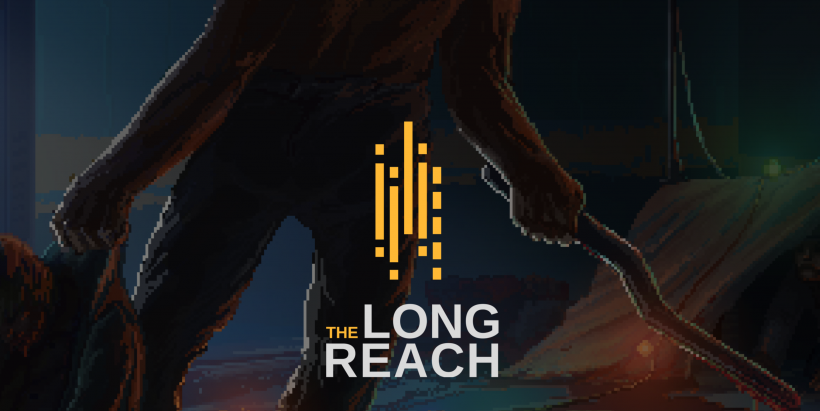 The debut Switch title from developer Painted Black Games, The Long Reach is here to spook your socks off with it’s Lone Survivor inspired pixel-art and gameplay. The visuals have one of my socks blown off, but the spook factor has the second sock still hanging on my foot. Dreadful analogy.

The Long Reach is a side-scrolling horror with point and click, inventory-based elements, that sees you exploring a medical facility/office building and interacting with numerous different objects in order to solve environmental puzzles and progress. The internal monologue of your character Stewart, as he muses on every coffee cup and office flyer, is well written and often funny, and the same can be said for the conversations amongst characters. There are quite a lot of f-bombs dropped throughout the game’s roughly 3-hour play-through, but that’s understandable considering the fact that your colleagues often try to kill you in a violent stupor. This adds a minor hiding mechanic to the game, giving you the ability to crawl under kitchen tables and into lockers to avoid the enemies. It’s fairly well executed and throws some genuine tension into the mix.

The presentation in The Long Reach is where it shines. Not only does the sound design (and lack thereof) create an ominous atmosphere, but the Pixel-Art graphics and animations are utterly beautiful. The attention to detail and intricacy on even the most mundane of office objects is stunning, and the lighting effects (with your torch and dwindling light sources) are great too, again adding to the atmosphere. One specific example that impressed me was a blue-screened PC monitor: You can switch the lights completely on and off in the room, resulting in a dim blue hue. I never thought I’d be happy to see the blue screen of death.

Unfortunately, The Long Reach’s story doesn’t match up to the presentation. The introduction to the game, which sees a character visiting a grocery store late at night, is utterly captivating. Perfectly throwing you into a setting with some effective dialogue and thrilling violence, it makes you desperate to find out more and had me enthralled in the game when the opening credits rolled. The problem is, when you find the answers that you’re looking for, they don’t really make any sense, and aren’t satisfactory. After a promising start, the whole ‘Medical Facility’ setting felt a tad trite to me, and I couldn’t help but think about what the game could be like in the outside setting.

During my play-through (Version 1.0.0), I also came across a couple of technical hiccups that were an annoyance. I played the game in two sittings, in handheld and docked, and I suffered one complete crash of the game and two loading screen crashes, once on the credits and once loading into the game. All of these crashes happened for me in handheld me. These weren’t the worse thing in the world, but they’re worth noting.

The Long Reach is a fantastic debut from developer Painted Black Games in terms of presentation, but its lacking story (or explanation thereof) and technical hiccups hold it back. If you fancy a short horror experience with sleek, pixel art visuals and classic point and click elements, it’s worth giving it a try.