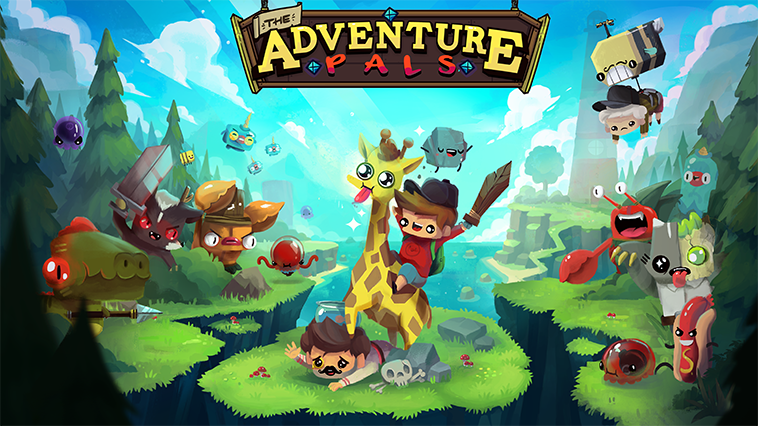 A game full of laughs and giraffes…

The Nintendo Switch has seen its fair share of platformers in the 13 months it has been on sale for, with many of the genre’s best available, including the likes of Super Mario Odyssey, Rayman Legends and Sonic Mania.

So, can The Adventure Pals from Massive Monster make an impact as a newcomer to the table? Let’s find out!

The game starts with your birthday party, but your special day quickly turns sour when your father is dad-napped by the evil Mr. B, who is going around stealing old people so that he can turn them into an army of hot dogs. With the company of Sparkles the giraffe and your pet rock, Mr. Rock, you embark on an adventure to rescue for father and overcome Mr. B.

If you haven’t already guessed, The Adventure Pals doesn’t take itself too seriously and is a game that is full of self-referential and fourth-wall breaking humour. The story is absolutely bonkers and you’ll meet a wide array of oddball characters on your travels through the five worlds on offer who will provide you with quests to complete and items to find on your journeys.

It won’t take long for players to get used to the game’s mechanics, and as you progress new environmental hazards and objects are added to help or hinder you as you traverse levels, such as spike pits, rope swings and moving platforms. Alongside the traditional platforming levels, each world has an optional Arena level where you take on waves of enemies and an end of world boss battle before you progress to the next.

The Adventure Pals is aimed towards the younger gamer, and the control scheme is simple enough to get to grips with, you jump with a press of the B button, attack with Y and interact with chests and level exits with the R trigger. Defeating the bandits, rogue hot dogs and other enemies you encounter will earn you XP which will level up your character. This RPG-lite levelling system will grant you a choice of skills to unlock at each level which will certainly prove useful as you progress.

That’s not to say that people of all ages will not enjoy this game. With crude gags and humour featuring that made me chuckle throughout, The Adventure Pals is similar to the type of kids cartoon that sneaks jokes and remarks to humour the adults. On the subject of similarities to kid’s cartoons, the game’s artstyle is like looking at something you’d see on the Cartoon Network. With a beautiful colour palette and great character designs and animations – including using Sparkle’s tongue as a propellor to glide through the skies and sail through water – The Adventure Pals is a real looker.

However, all is not perfect in this wild world – there were instances where the framerate suffered due to too much happening on-screen. This is most notable when there are a lot of enemies on screen – hopefully this can be fixed in a future patch. I also felt that the game got a little repetitive towards the end, although each world is thematically different, the levels feel very similar.

Saying that, these minor faults don’t detract too much from what is a fun game. It is clear to see that a lot of love was put into making this game and, unless you have a heart of stone, you’ll get a lot of joy from it!

The Adventure Pals is a charming platformer that players both young and old can enjoy. With a great sense of humour and a beautiful cartoon-y artstyle – Massive Monster’s latest will surely bring a smile to your face!