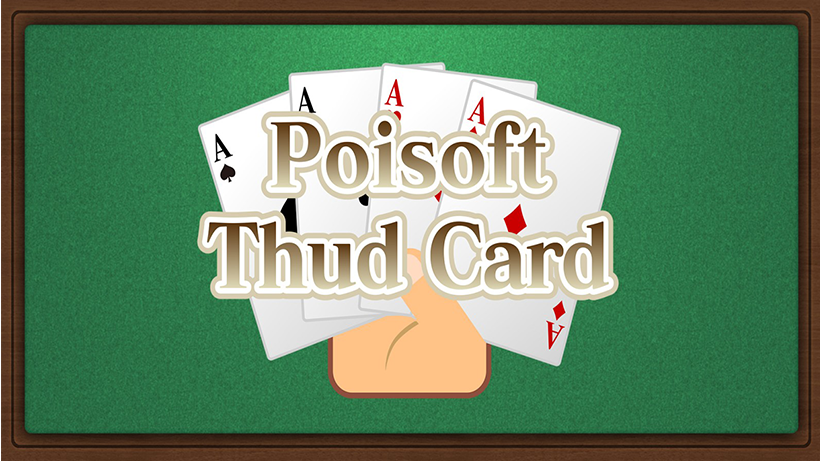 Down with a thud.

Thud Card is exactly what it says on the tin, a game of thud. It’s no more or less than that so really there isn’t much to dive into here but none the less welcome to the complicated world of Thud Card. The objective of Thud Card is to have the cards in your hand total the same as the card in the middle of the table, for example having a 4 & 5 in your hand when a 9 is in the centre will win the round. Each turn you will have a chance to play a card from your hand that either matches the value or suit of the card in the middle, some of the cards you play may also have additional effects like forcing another player to pick up 2 cards or reversing the turn order. 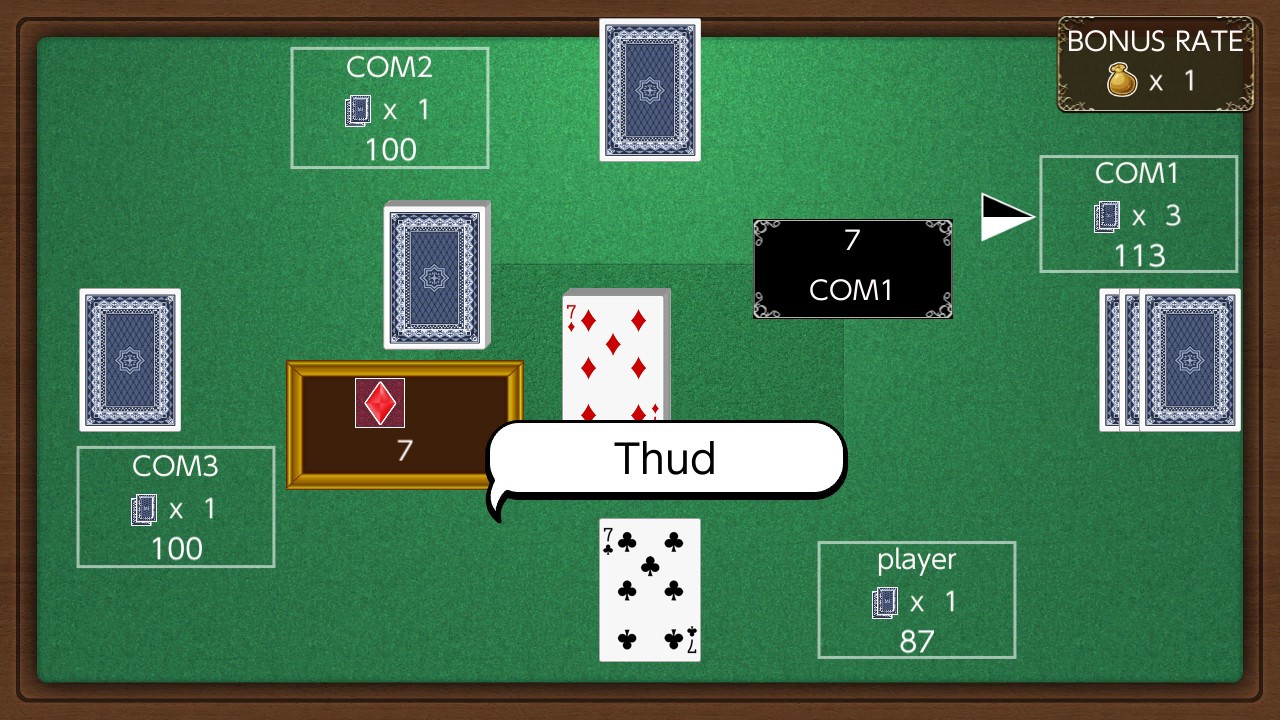 These special cards should make things more interesting but it’s difficult to use them in a way that feels strategically helpful. There are plenty of other obscure rules to consider as well such as “Bursting”, these barely come up and I’m still not sure how these rules make the game more compelling, it feels like there are layers of complexity for the hell of it. 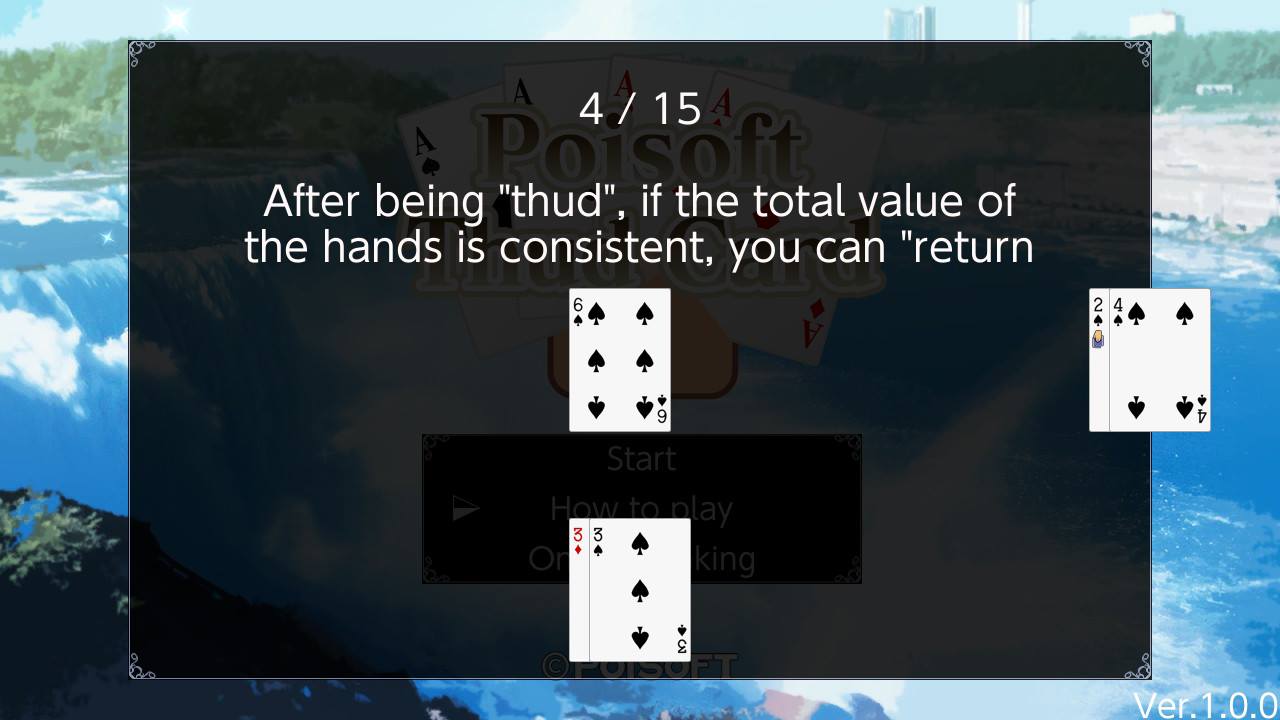 The biggest problem with Thud Card however is that it is very bad at explaining how to play the game, the instructions given make borderline no sense and do little to help you through the game, a guided walk-through of a game and some scenarios would better help here. After a few games you can pick up the gist of the rules, maybe even win a round or two but that brings me nicely to the next complaint, there’s nothing more to this game, you endlessly play rounds of the game either against the computer or other players, online or locally. Each round you win alters your score but outside of it being a number beside your name, it means very little. Remember beating Solitaire on the computer and all the cards would bounce across the screen , remember how satisfying that felt, well none of that satisfaction is present here, you win a round, numbers change and it’s onto the next round. Rinse. Repeat. 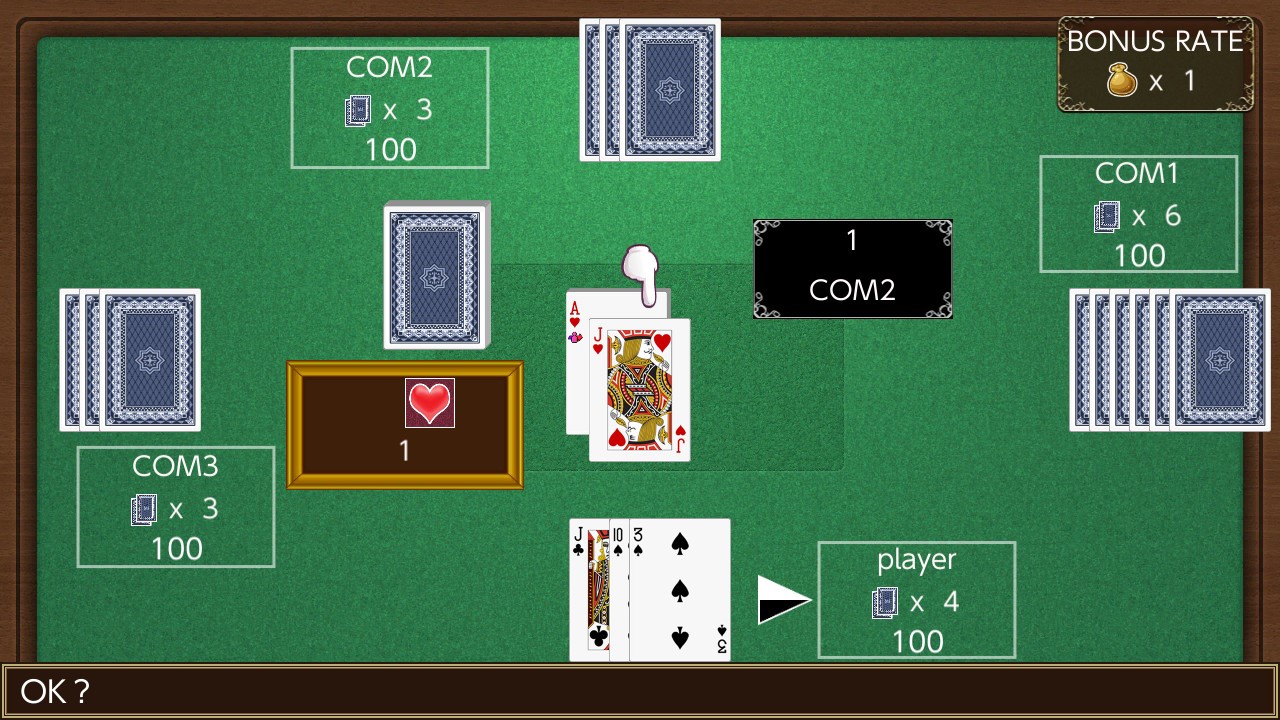 There’s no cool visual styling to be found either, there’s no cool artwork on the cards they’re simply a plain deck of cards, it would be nice to have different card backs or table tops to play on to spice things up this would go a long way to helping make the game feel a little less bland. To really spice things up the game could benefit from some sort of achievement system as a form of progression for players, combining this with unlockables such as new card backs would help to to incentivise players sticking with the game. As it stands the game simply exists for you to play and doesn’t seem too concerned if you move on and never come back.

Thud Card is very content to just be the card game that it is, no bells or whistles, for those wanting a 5 minute distraction this might be worth a look but poor instructions and complicated rules mean that you’ll spend more time learning how the game works than you’re likely to actually spend enjoying a relaxed game of cards. The game is what it is and that makes it hard to recommend to anyone that isn’t explicitly interested in playing Thud.

Thud Card is a complicated card game with very poor instructions and a lack of interesting reasons to return to the game, it’s hard to see anyone having an enjoyable time with this game and as such I couldn’t recommend anyone going out of their way to try Thud Card.