Joining an ever-increasing list of top-down arcade shooters coming to the Switch, Inksplosion is a title that fails to stand out in any kind of meaningful way. Taking direct visual inspiration from Splatoon, it’s a game that certainly looks pretty enough, I guess, but its gameplay is so mediocre across the board that I cannot bring myself to recommend it to anyone.

There’s no plot to speak of in Inksplosion – you’re thrown straight into the game’s initial ‘Classic Mode’ in which you face off against waves of enemies, with the game randomly rotating your available weaponry, from rockets to laser beams. Gain enough points in this mode, and you unlock the next mode called ‘Arena Mode’, and so on and so forth. You move your ship around with the left analogue stick, and aim with the right. Shooting is mapped to the ZR button for all weaponry and you can slow down time with the ZL button. The enemies will only ever come at you in groups of four, and I can only assume this is either because the arenas are just about big enough to accommodate this many enemies, or the game simply cannot handle anymore. Either way, it’s disappointing and makes the entire experience far easier than it should be. Furthermore, your health regenerates after every wave, making both Classic and Arena modes a bit of a cakewalk.

The main draw of Inksplosion, of course, is that all the enemies and projectiles leave behind a trail of different coloured ink across the otherwise blank arena. Eventually, the entire screen will be filled with drips, splodges and trails of ink, resulting in a random mixture of colour, which admittedly looks pretty cool (however, I can see a lot of people being put off by the visuals after a while – it’s bold, to say the least). Other than that, it’s such a basic, bare-bones top-down shooter, there’s very little to differentiate it from any other title in the genre. 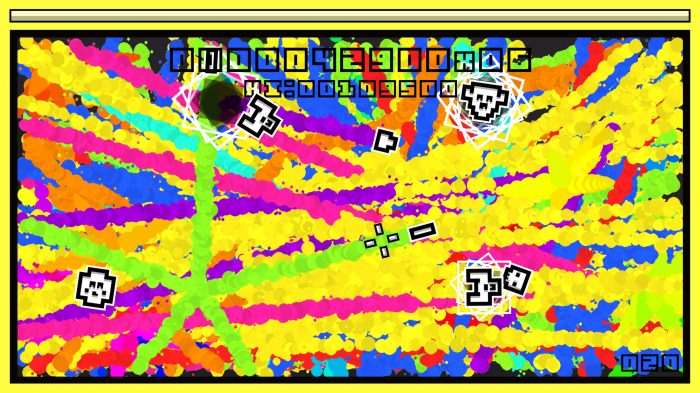 As mentioned, the initial game mode available will see you taking part in bite-sized chunks of gameplay, always against four enemies alongside moving barriers that will cause damage if you run into them. The screen can occasionally be a bit hectic, and it’s very easy to accidentally move into the oncoming path of an enemy projectile. To combat this, the game allows you to slow down time to allow easier manoeuvrability around the arena (although to be fair, if you’re already in the way of a projectile, slowing down the time will likely do nothing to prevent you taking damage). It’s a pretty slow affair, and none of it feels like it has any kind of momentum – I frequently felt like I was just going through the motions.

Collecting enough points in ‘Classic Mode’ will unlock ‘Arena Mode’, which is basically the same minus the moving barriers. If anything, this makes the game slightly more enjoyable, but it’s still very cumbersome thanks to the small scale of the play area. Gaining enough points in this mode will then unlock ‘Hard Mode’, which is the same experience again except your regenerative health is stripped from you, and that’s basically the entire game. Just three modes with very little to differentiate them all. It’s short, it’s easy and it’s entirely unsatisfying.

Inksplosion is an entirely mediocre experience that fails to stand out amongst stronger titles in the arcade shooter genre. Pretty colours do little to distract from its boring, repetitive gameplay.