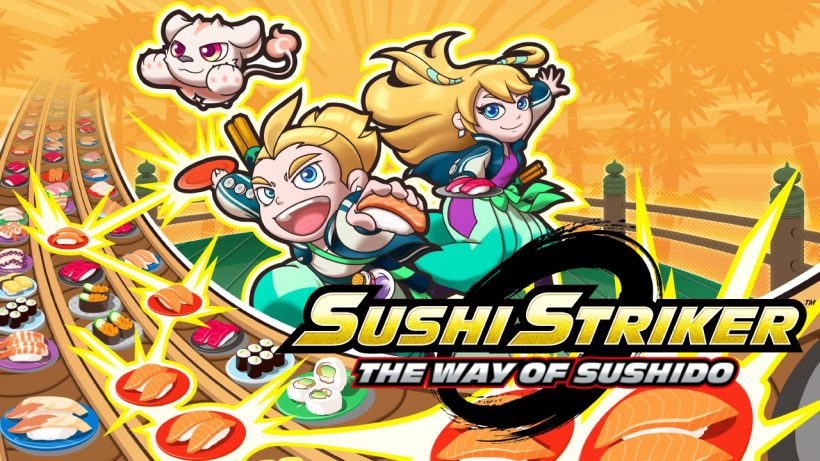 I’m sure I couldn’t have been alone in thinking “WTF” when first seeing Sushi Striker: The Way of Sushido announced for the Nintendo Switch during the March Direct. I mean, a game where the gameplay and story are influenced by and revolve around the Japanese delicacy is about as niche as you can get – unless you often look at the revolving carousels of fishy treats in your local sushi bar and wish there was a game based on them.

If you missed the trailer and the accompanying catchy theme tune and haven’t tried the demo that is available right now on the eShop, let me bring you up to speed on what Sushi Striker is all about. A puzzle game by nature, Sushi Striker could be compared to a match-three puzzler, except that wouldn’t really do it justice. The aim of the game is to out-eat your opponent, using the empty plates from the consumed sushi to hurl across the sushi lanes to dish out damage to your fish-eating foe. There are four lanes of sushi for you to pick from (one shared with your opponent) and you must chain together sushi plates of the same colour to build up a stack of plates to increase the damage your character will deal – all whilst the opposition is doing the same.

It sounds relatively simple when put like that, but as you play through the story you will be fed new mechanics to take into battle that add depth to the game. You will learn that different colour plates deal different levels of damage and will get seven seconds to try and chain as many together of the same colour as you can. Completing chains and dealing damage to your opponent will earn bonuses such as “Sushi Jubilee”, where plates that offer higher damage become available for a short burst of time.

The game’s story, which is just as bonkers as you’d expect it to be, tells a tale of a feudal war between the Empire and the Republic. The Empire want to keep all the sushi in the world to themselves, whilst the Republic want everyone to be free to eat the beloved delicacy. Our protagonist, Musashi, like many children in the world has lost his parents to the war. Learning he is rather adept in the fine art of sushi striking, he sets out to avenge the Empire. It isn’t long until Musashi comes across the first of many sushi sprites that inhabit the world. These Pokémon-esque creatures offer you a pledge plate and, should you accept and eat their offering, they will join you for the ride. These sushi sprites are highly sought after by sushi strikers from both sides, as they possess unique skills that will help determine the winner of the ongoing war – they will even evolve into much stronger versions of themselves if you form a strong bond with them!

The story is told via anime cutscenes and visual-novel style semi-static images and text scenes that are both beautifully animated and well written. Both the narrative and characters are charming and funny, and I often forgot that Sushi Striker is a new IP – as it often felt like I was watching a well-established anime when not in the middle of the plate-throwing fun!

Alongside the aforementioned Sushi Jubilee, there are sushi sprite-specific powers that will be unlocked by chaining together combos. Activating one of these powers during battle will give you a short perk, such as turning all the plates on your conveyor belts to sweets so you can eat them and refill your health or speeding up your opponent’s lane to make it difficult for them to chain together plates.

The winner is the sushi striker who depletes their foe’s health bar the quickest. After each battle you will be given a rank based on how well you performed in battle and there will also be up to three stars awarded dependent on meeting certain mission requirements. The higher you score, the more experience you will earn – which in turn will see both Musashi and your current squad of sushi sprites level up. Levelling up will see you unlock new types of sushi to use in battle and, by using a type of sushi frequently, you will become proficient with that sushi type – earning useful, equipable perks such as extra time to chain a combo or dealing extra damage when your health gets below a certain percentage.

There is so much depth to Sushi Striker and, although it may sound a lot to take in, the game does a fantastic job of not overwhelming you and is rather user-friendly. You can switch the current sushi sprites and perks equipped in between each stage, and once you have fought an opponent once can see their loadout so that you can plan your best strategy for the battle ahead.

Once you are feeling like a star striker, you can challenge friends or fellow Switch owners to a sushi battle. The game has a hub area called Shrine Grove from which you can enter both local or online battles – with the game setting both players to level 30 to ensure a level playing field. If you fancy a break from sushi striking, this hub area also has other areas for you to visit and different characters to meet while you have a little respite from your main mission.

The only thing that I found a little unwieldy and challenging with the game was its control scheme. At first, I tried playing the game using the touch controls in handheld mode. By tapping on a plate, you then slide your finger around the lanes to add more plates to the combo and then swiping the plate stacks at the bottom of the screen towards your opponent to attack. This wasn’t too bad for the early stages, but as the challenge ramped up I found it a little cumbersome and not the best for a fast-paced round that relies upon you paying attention to the on-screen action. Although my big hands probably didn’t help the cause too much! As I progressed further, I soon gave up on the touchscreen controls and defaulted to using the Joy-Con to play. This was much easier to chain together plates using the face buttons and the analogue stick, but it makes you feel a little detached from the action and detracts from part of the game’s charm. I can’t help but feel, in this aspect at least, that the 3DS version of the game will be superior due to the precision control that is offered by the stylus and dual screen combo.

However, my issues with the game’s controls didn’t take too much away from my enjoyment of the Sushi Striker: The Way of Sushido. I went into this game not really knowing what to expect but I am certainly glad that I got the chance to review this wonderful, weird game! Who’d have ever thought a game about sushi could be so fun and appealing? Certainly not me, and there’s certainly no stopping the big N’s memento with great titles for the Switch – it’s safe to say they’re on a (sushi) roll!

Sushi Striker: the Way of Sushido

Sushi Striker: The Way of Sushido is a title that is abundant with charm and content that is hampered a little by a slightly unwieldy control scheme. That aside, it will take you a while to see all this great game has to offer – and even longer to get the annoyingly catchy yet brilliant theme song out of your head!