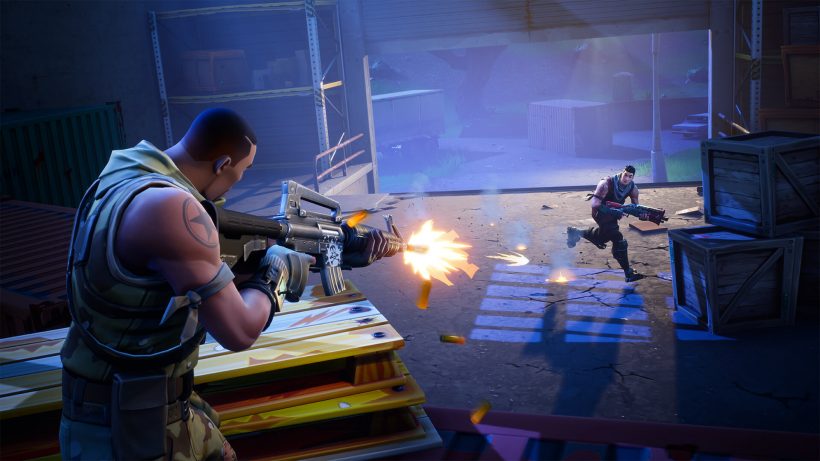 G’day folks! Hope everyone’s been enjoying E3 this week. If you thought the event in LA would allow for a quieter week on the Switch eShop, well… no, sorry. Lots of new games are launching this week, including the totally FREE Fortnite and the much anticipated Hollow Knight! Check out the full list below.

Jump in to be the last one standing in the free 100-player Battle Royale. Build huge forts. Outwit your opponents. Earn your Victory. Squad up together online with friends in the same room or around the world!

Fallout Shelter puts you in control of a state-of-the-art underground Vault from Vault-Tec. Build the perfect Vault, keep your Dwellers happy, and protect them from the dangers of the Wasteland.

JOLT is a fast paced, racing party game. The game at its core is a competitive platformer that’s all about maintaining momentum with skillful navigation. The players compete to be the last robot standing.

Alchemic Jousts is a 2D action strategy game mixing card game’s deck creation and real time gameplay. Command your elementals and support them with a wide variety of Skills. Control the arena and crush your opponent in one-to-one encounters!

Immerse yourself in the beautiful world of Hexologic. Solve challenging, yet rewarding puzzles, listen to relaxing music, dive deep in the game’s atmosphere and fall in love in sudoku again!

Speed through stunning 3D tracks you created and re-discover the magic of SCALEXTRIC !

Join 25+ million players in Paladins, the free-to-play fantasy team-based shooter sensation. Wield guns and magic as a legendary Champion of the Realm, customizing your core set of abilities to play exactly how you want to play.

Mahjong Deluxe 3 is the newest entry in the Mahjong series of casual games produced by award-winning game developer EnsenaSoft. With more than 15 million downloads across versions, the series of Mahjong Deluxe continues to impress with its ease of use, intuitive controls and family-friendly features and content.

“SUPER SIDEKICKS 3: THE NEXT GLORY” is a soccer game released in 1995 by SNK. Compete with 64 teams from around the world and six different kinds of tournaments where players can aim for the championship. Digitally traced animation makes for beautiful action along with a variety of impactful renderings and 3D shots which allow for intense gameplay.

Beekyr Reloaded is an exciting shoot’em up that brings back the joy of classics in the genre. Play as Beekyr, a brave bee that must avenge his hive from the nasty wasp queens that destroyed it, along five different worlds filled with dangerous insects and many hazards that will put your skills to the limit.

Chameleon Run is a unique, fast and challenging autorunner with a colorful twist. Jump, switch and run through expertly crafted levels that will have you running back for more.

It’s a romance game where you can fall in love with one of several middle-aged men. All of them are experienced in life and have their own stories to tell.

Soccer Slammers is 2-on-2 arcade football with no rules. Just fast-paced fun for 1 to 4 players on a single Nintendo Switch™. Crush your opponent by mastering power shots, slam tackles, bank shots, super sprints, and team combo-shots! Warm up with a two minute Quick Game or go for glory in the World Cup against the top 32 teams in the world.

In THE Number Puzzle you follow easy rules to fill in a grid with the numbers 1-9.
So simple you will get addicted! 500 puzzles in all!

Tira the dessert hunter explores ruins to uncover the recipe required to revive a dessert from ages past. One day, Tira discovers a golem shaped like a mitten and finds out the legendary dessert she’s been searching for is real. Head out in search of the legendary recipe!

“DONKEY KONG” is an action game released in 1981 by Nintendo. Avoid a variety of obstacles while heading through a construction site to make it to the top and rescue Lady. Use the hammer to destroy the barrels and fire coming towards you to earn more points. * This version contains both the early and later versions as well as the international version.

In UP UP BOT help your robot friend climb the platforms by tapping the Touch Screen. Be careful and watch out for bad robots trying to stop you from progressing even higher. Endless fun for everyone!

Under orders by the King, players assume the control of a Knight instructed to head into the catacombs beneath the Kingdom, to slay the fowl beasts and monstrosities that have invaded the murky depths.

Play as Yuma Ilvern and stop the Empire from exploiting the power of the ancient dragons, including the soul of the Shining Dragon within you. With the help of your friends, realize your destiny, save Astoria, and unleash the strength you’ve always had locked away.

In this demo, you can choose one of the 8 characters like in the full game, and experience the first chapter of their travels. Within this area of the first chapter, as long as it’s within 3 hours, you could set out to have other characters join your party, or even just go and explore towns and dungeons without any particular goal in mind. Travel the continent of Orsterra however you want. Your save data from the demo can be carried over to the full game so you can find your favourite character, and start playing through their story however you like.