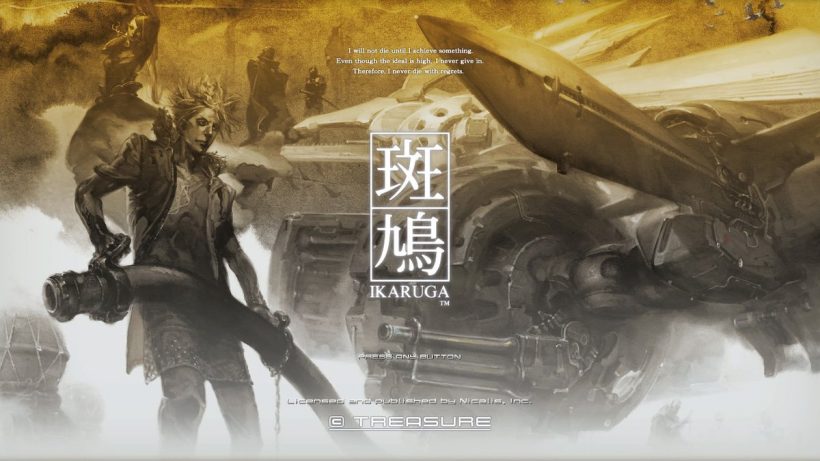 The cult hit schmup is on the Switch, but is its age holding it back?

The Switch eShop is doing well for cult hit games at the moment, with Ikaruga releasing in the same window as Flashback, and Night Trap and others to follow shortly.

Originally an arcade game, Ikaruga would appear on Dreamcast and in a very fondly remembered Gamecube edition in the early 2000s, and after around fifteen years, the game is back on a Nintendo system.

Ikaruga is a notoriously difficult game, even from the very first level on the easiest difficulty setting. If you thought Sine Mora EX was a tough shoot-em-up when that released on Switch last year, this one makes that look like the playgroup alternative. Ikaruga is the name of the ship, and with the touch of a button it flips from white to black, firing in the same colour. Enemies will largely share this colour scheme too, and this is where the mental concentration reaches its torturous level right away. Depending on which colour your ship is, you’ll have an invulnerability to ships and shots of the same colour, but do more damage to those of the opposite.

Immediately, you’re presented with waves of a manageable handful of enemy ships all in matching colours. But the game wastes not a second longer than it needs to on any handholding – you’ll quickly see streams of enemies of both colours filling the screen and spraying shots everywhere, meaning that while you’re focusing on positioning your ship in order to strike them all down (you can only shoot upwards), you’re also going to have to dodge all shots of the opposite colour. This is really tough to keep on top of without the most ultimate of concentration – your brain will be working much faster than it would be for the majority of games, and if you’re not hardy enough, you’re going to be signing yourself out.

Having a mixture of bullets filling the screen as well as a mixture of enemy colours really is harsh. Add that to the fact you get three chances for mistakes before you have to start the level over, the challenge level here is going to keep you engaged for ages if you’re an Ikaruga newbie. At the end of each level, by which time you’ll see that the enemies are becoming noticeably tougher, a boss battle will begin, and again you’ll need to switch between colours for different stages while overcoming another seemingly unavoidable avalanche of shots. It’s almost as if every single aspect of the game was added with the developers thinking of ways that they might increase the difficulty – collide with an enemy ship of a different colour? Death. Forget which colour you are and brush against the wrong enemy beam? Death. Collide by accident into an inanimate object because you were too busy focusing on the nightmares of shots ready to eviscerate you at a moment’s notice? Yes, have yourself a third helping of death.

The game is playable in both single player and co-op modes, but it’s the online leaderboards, an improvement on the Gamecube edition, which will keep players on the longer term. The higher-performers are already posting scores to make the new-starters shudder, and it’s an extra strain on the brain required if you want to improve your scores, with bonus points awarded for taking down chains of three of the same colour enemy in a row. Thankfully, there’s an extra incentive beyond just high scores to do this – you’ll get homing missiles which you should save for the end-level bosses to prove a real lifesaver. But the game wants to make sure you’re really battling a high level of difficulty with the leaderboards, because any fiddling with the settings to make things easier results in automatic disqualification from posting your scores. You’re going to need to head to the settings to add more lives and continues to start with – that’s a better tutorial entry mode than what the game offers naturally.

That one of the modes is labelled as an ‘easy’ mode is a joke in itself. Fortunately, the main arcade mode offers an unlimited supply of ammo to plod through the game with, and you can use a level select option, though the menu layout on this doesn’t make selecting that option the smoothest of processes. You have to scroll down to the level select button and select it, only to find yourself with another similar menu where again you have to reach the bottom and flick the control stick either left or right in order to switch your starting point. This game really does take no prisoners, the developers not even letting you have an easy time with the starting menus…

Not enough difficulty? More, you say? Of course you want more. The Prototype mode is here for this edition of the game, which reduces your ammo and leaves you as a virtual sitting duck just zooming from side to side and trying to avoid the incoming attacks in desperate fashion.

Visually, it looks sharper than it did on the Gamecube, but it still feels like a Gamecube or Arcade game. From the tiny menu text to the design of the enemies, there’s something distinctly retro about the game. There’s some scenery going by in the background as you play, but you won’t see any of it; your eyeballs will be glued to the shots you need to avoid. Yes, you can spin the Switch ninety degrees for a more authentic vertical arcade-like experience. Musically, meanwhile, Ikaruga is exceptional, with orchestral tones following you from stage to stage, ramping up the pressure when you don’t need it and complementing the action, which a lot of soundtracks don’t manage.

Success in Ikaruga isn’t going to just come by itself. You need to want to complete it. It’s never going to be a game which allows you to plod through it in an hour or two – it may only have five chapters, but getting through even one of the levels is achievement enough for you to warrant yourself a round of applause. Those not of the right determination and frame of mind simply aren’t going to make it to the end of the game, no matter how much fiddling you do with the game’s settings.

Ikaruga is hard. That may be the conclusion you’ve already drawn from the review, but rarely before has it been so apt. This is bullet hell with emphasis on the hell – don’t think you’re going to breeze through it.