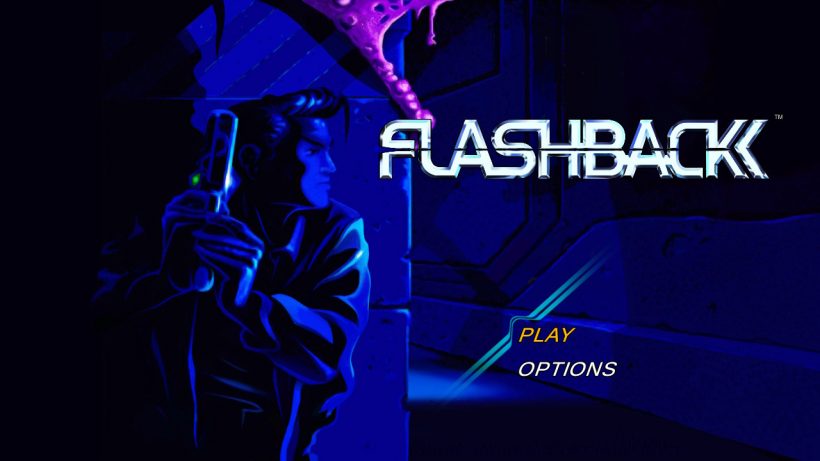 Step back in time.

Back in the mid-90s, when I was a wee child, my older brother owned Flashback on the Mega Drive. It’s a game that I know I’ve played many times back in the day, but until recently I’ve struggled to remember much of it. I was probably about 5 at the time, after all – cut me some slack! When I booted up the newly released port on Nintendo Switch, however, it all came flooding back. The visuals, the music, the controls, all of it. Hell, I miraculously even remember where to go and what to do, which after at least 20 years is frankly ridiculous. And the good news..? It’s just as good now as it was back then.

Flashback stars Conrad B. Hart, our protagonist who finds himself waking up in the middle of a jungle with little to no memory of recent events. He picks up a nearby holocube which contains a message recorded by himself earlier on, telling him to meet up with his friend Ian in Washington. And so begins your adventure. 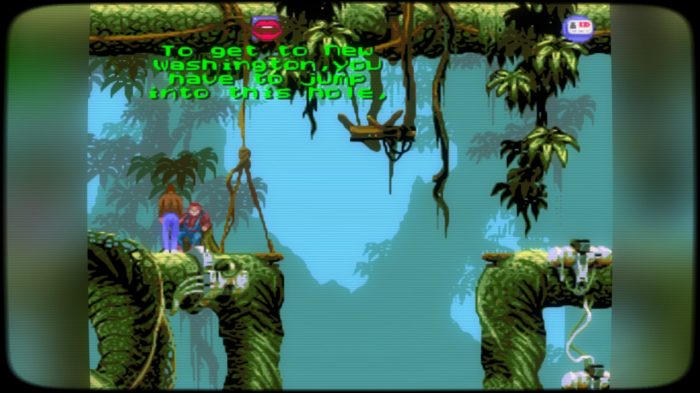 Flashback is undoubtedly a game from the early 90s both in terms of visuals and controls, so you probably already know if it will appeal to you or not. It’s a 2D platformer much in the same vein as the earlier Prince of Persia title and the later Oddworld titles on PlayStation. You control Conrad with either the left analogue stick or the left Joy-Con’s face buttons, and holding down A at the same time will allow him to run. Jumping is performed by pressing up on the face buttons – pressing this alone allows Conrad to jump straight up, whilst pressing it together with A lets him jump forwards, essential for crossing gaps.

Navigating the environments can be tough enough on its own, but littered throughout the game are various enemies, all of which fully capable of halting your progress rapidly. Conrad thankfully has his trusty pistol to hand. Combat in Flashback is pretty basic on the whole, but some of the moves make for some pretty cool, satisfying encounters. You can draw and holster the gun at the tap of a button, and fire with another. Holding onto the gun will allow you to strafe slowly, cautiously approaching your enemies, and if you drop off a ledge whilst holding it, you’ll automatically land in a crouching position, allowing you to down your enemies in style. 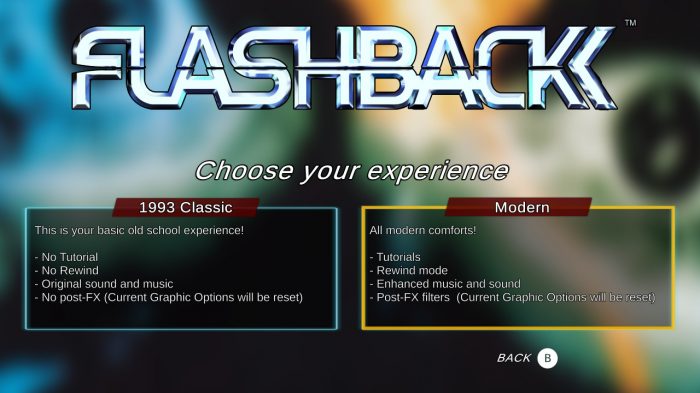 This version of Flashback presents you with two options from the start: Modern and 1993 Classic. Modern is there for newcomers to the game. It not only revamps the visuals slightly, but it presents you with helpful tutorials and a fantastic rewind feature should you perish at any point. The Classic mode is the original Flashback experience through and through; that means no tutorial, no rewind and the original pixellated graphics. If you’re new to this sort of game, or you’re a bit on the younger side, I’d avoid Classic mode until you’re a bit more familiar with the game. Dying and starting from scratch in the earlier sections may be a tad demoralising.

All in all, Flashback is a wonderful game that I never thought I’d experience again. Its music is particularly nostalgic, and I have to commend the effort taken to modernise it slightly for new generations of gamers.

Flashback is a great game that somehow manages to stand the test of time twenty five years later. The option to adjust the difficulty with the new Modern Mode should allow newcomers to ease into the admittedly brutal gameplay.