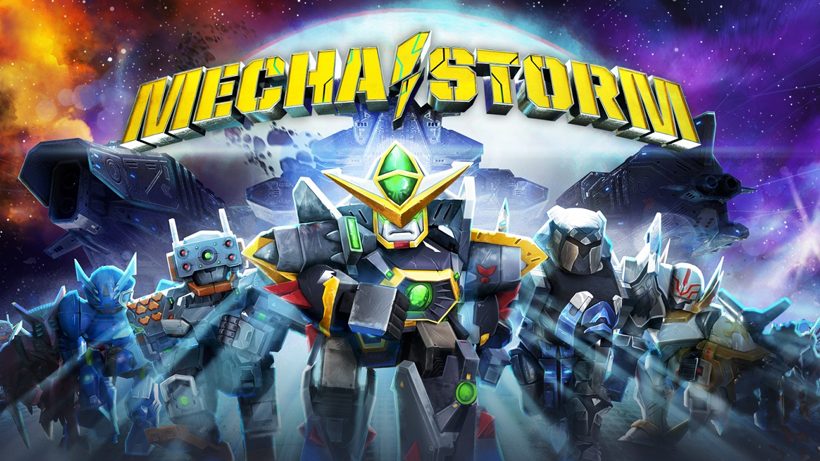 It might be fair to say that one of the more interesting genres is that of mechs. Having giant powerful suits of metal battling it out with endless varieties of weapons and abilities is sure to get anyone interested in a title. So with the release of Mecha Storm on the Nintendo Switch you would hope that this holds up. Sadly, the move from mobile devices to console has not gone without problems.

The set up for Mecha Storm is that a war between the two largest factions in our Galaxy has broken out after years of each side preparing for it. Each equipped with armies of powerful mechs, it falls down to the player to be the deciding force in who will be the winning side. The story that the title delivers is on the serious side and might capture the attention of some players, but isn’t anything to write home about. It does however serve as the backbone to a campaign that will see you battle across the Galaxy in over 50 missions.

These missions will be played out by taking direct control of a squad of three mechs which you can swap between freely to defeat countless enemies and bosses. Players will take control from a third-person perspective and make use of melee weapons, a range of different guns and special abilities. All of this allow for players to mix up the combat but it quickly become repetitive and feel flat. Even if you are controlling a squad of three powerful mechs it never really feels like you are which is a shame to say the least.

Thankfully controls hold up well and are responsive with a fairly easy to master layout. Performance is another strong point of the title and though the visuals are not ground breaking they do hold up. One of the main focuses within the title is collection and building mechs by means of numerous parts and weapons. This creates plenty of replay value as you hunt down and level up all the parts but due to the lack of variety in environments, enemies and bosses, even this become very repetitive.

You see the trouble with Mecha Storm is that even though it is now on the Switch, it still feels very much like a mobile title. This can be found in the design, gameplay, menu screens and pretty much everywhere. Though work has clearly been done to the title it is a shame that beyond the few good elements such as the okay visuals and performance, that not much else has been done to give this title a console feel. It’s even more of a shame when you consider that this release lacks the multiplayer mode form the mobile version which would of been a nice addition to have on the Switch.

So where does this leave Mecha Storm at the end of the day? In truth, the core experience functions as intended and is enjoyable to a degree. Beyond that though there really isn’t anything that makes the title stand out. It’s lackluster mobile port that removed some content and does not feel worth the price tag on the Switch. Unless you feel like you really need to play this title, I’d suggest passing on it.

Though the core experience functions as intended, Mecha Storm doesn’t do enough to distances itself from its mobile release and ends up falling flat on the Nintendo Switch.