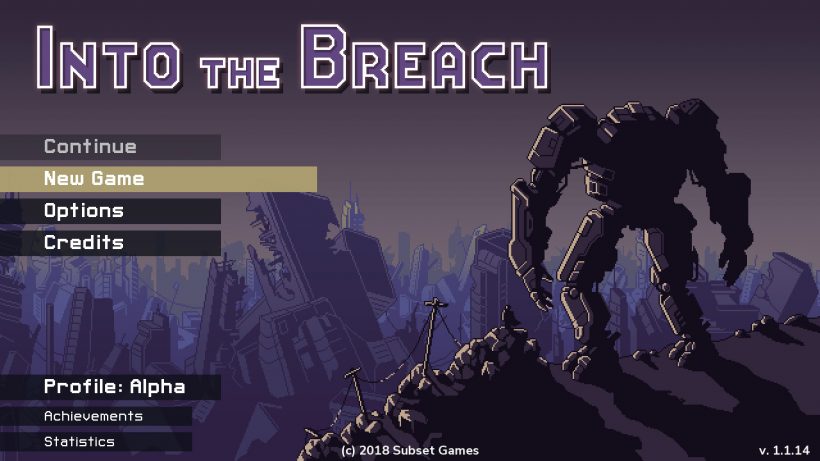 Mech-ing the best from the worst.

Sometimes, games centered on elevated difficulty challenges are able to create amazing experiences. Only this year, we had Celeste, Hollow Knight and Dead Cells, all of which use their hard-as-nails difficulty to provide an immense feeling of reward. Failure is part of these games, but it is usually just an obstacle between you and the victory. That’s why Into the Breach is unique. It obliges the player to live with their failures – and that’s an awesome thing, in fact.

The whole premise of the game feels like a mixture between Pacific Rim and Edge of Tomorrow. Insectoid monsters called Vek are popping out from the ground, trying to conquer the planet. You need to stop them by commanding a squadron of mech pilots. To help you on this task, you have access to time travelling technology, which is put to use both on its narrative and gameplay.

The fight against the Vek invasion takes place on four different islands, each one with unique elements and enemies that scale in difficult as you progress through the campaign. Similar to FTL – Faster Than Light (the previous game from the same devs), Into the Breach has a rogue-lite structure, with runs that don’t take more than two hours. There are certain things that you can keep between all your playthroughs, like a levelled-up pilot (that can be teleported between timelines) and all the islands you’ve unlocked. This adds a lot to the complex tactical possibilities of the game, as you can choose to play the islands in any order you like.

Talking about tactical complexity, the turn-based combat is where Into the Breach shines the most. Each island of the game is separated into sections, that works as levels, with different objectives and enemies. These levels are formed by 8×8 grids, in which your mechs will fight enemies that spawn at each turn. The time-travelling theme acts here too. At the beginning of each turn, the Veks will move, but won’t attack until the end of your turn. However, their attacks will be telegraphed to you, so your turn won’t be solely focused on damaging and killing your enemies, but also on trying to evade their attacks.

This basic premise adds a huge amount of depth to combat. The mechs have different classes, and not all of them has damaging tools. Instead, some can burn or freeze enemies. Others, can move enemies around. With this, you can keep enemies from damaging your mechs (or the buildings you need to defend). Even better, at times, you can even make the Veks damage each other.

With all these options, Into the Breach feels like a complex little board game. Limited to only three mechs, you’re not able to deal with every single enemy, so you’re constantly trying to cut your losses. As you complete certain objectives, you’ll get coins that can be used to unlock different mech squads, each one of them different and demanding a unique approach in combat. Thanks to that, the game has a ton of replay value. As you protect humanity on different timelines, you’ll take very distinct paths, with varying success. Still, it’s always pleasurable when you’re able to turn things around and keep living until the end – even if on the verge.

Into the Breach feels like a board game in which you must control a squad of mech robots to defend the planet. With turn-based combat that is as challenging as it is deep, it offers tons of replay value thanks to its many unique squad layouts.