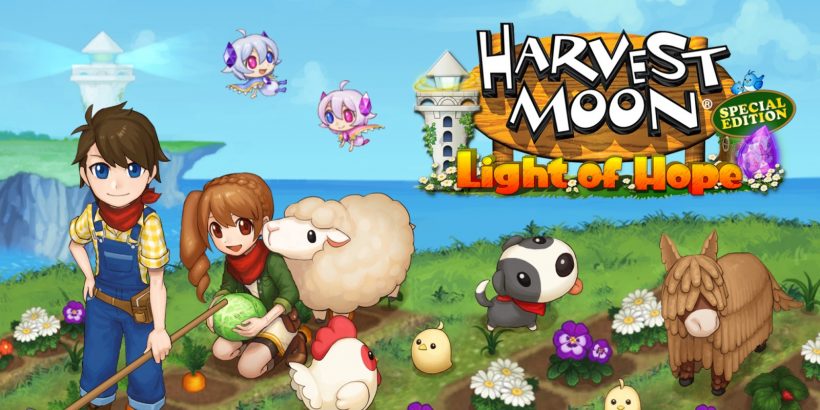 While some of the games in the series have for some reason appeared exclusively on other formats, Harvest Moon has been closely linked to Nintendo over the years.

From the original game appearing on the SNES, just about every Nintendo system (with the exception of the Wii U) received a Harvest Moon game of some kind. But the chronology of the series is a bit more complicated nowadays – the Story of Seasons IP is made by the same team as previous titles and that is considered the continuation of the original series, while the Natsume team who retained the name rights of Harvest Moon opted to continue that line going separately with a new timeline of games, of which Light of Hope is a part.

This Special Edition of the title is the only one Nintendo fans get – though there is also an amazing collector’s edition which takes the massive shape of a barn and includes pins and other goodies. The non-special edition was released previously on other formats, but Nintendo fans getting the special edition means that they’ll get the majority of the DLC included. There’s still an extra bit you can pick up from the eShop, however.

The story goes that a terrible storm has ravaged the island and shut most of the island’s businesses as it forced the owners to flee. You have found yourself unconscious on the island, where you’re discovered by one of those who have remained and eventually end up being given a role of farmer on the island. You’ll need to harvest to raise funds and plunder for materials in order to fix up all of the damaged business premises and encourage civilisation to return. The titular Light of Hope comes in the form of the island’s lighthouse – retrieve plaques to power up the light on each floor and you’ll attract more islanders back to your town.

The thing to be mindful of is that in order to be successful in Harvest Moon, you’re going to need to have some serious hours set aside to dedicate to it. It’s not simply a case of being able to carry out as many quests as you possibly can in the space of one in-game day – you have a happiness meter which you need to keep an eye on in order to avoid total exhaustion for your character. Every form of manual labour in the game, from mining for materials to chopping down trees, will eat away at that metre. You can replenish your metre somewhat by consuming some of your harvest crops, but really you want to be saving these for selling, as all of your money is pretty much self-generated. You need to balance building up materials with raising money, which adds days to your adventure as often you’ll find yourself with a case of needing to spend money to make money.

There are a lot of gameplay elements at play within Harvest Moon, from the adventure – exploration of heading out and uncovering new areas of the map, to the bonding with non-playable characters, some of whom you might be able to form romantic relationships with. As a result, there’s a lot that you have to cram into one in-game day, as failing to speak to someone or neglecting to water your crops will set you back in terms of how long it’ll take for your hard work to yield some fruits. You’ve also got to work on clearing the way for farming land: destroying rocks, pulling up weeds and chopping down trees to ensure a smooth landscape that allows you to get some sort of organisation to your planting of seeds and turning your fledgling farm into a well-oiled machine that the major supermarkets would be proud of.

But things could have been ironed out more to make the experience feel less of a grind. Digging for materials in the mine is incredibly time consuming, and there’s no visual differences to distinguish each of the ores that you can find. For a repair mission early on, it was a necessity to acquire a lot of iron ore to convert into iron for a building material. With the type of ore you get seemingly completely at random, it took days to get the right amount of material, and it felt like a grind, with no real entertainment value to it whatsoever. It didn’t help that attempting this will use up all of your happiness meter of the day if it doesn’t yield what you were looking for, and then when you’re down to your last sliver on the meter, it’s a very repetitive trek all the way back to your farm to sleep and rest up ready to do the same thing the next day.

Visually, this has got to be one of the most basic Harvest Moon games yet. Character models look like they might have appeared in a Wii title; the development team have clearly tried to go for a simplistic and clean look, but in the age of Stardew Valley and Story of Seasons, it just comes across as light. The music, though, is lovely – a soothing and relaxing melody which matches the slow pace of the game, though it certainly isn’t something that we’ve never seen before in the Harvest Moon series, of course. Sound effects are considerably more basic, though – exactly the same bug noises we’re used to in games like Animal Crossing, and the action effects are generally irritating and repetitive. But nothing is more annoying than the low-health beep, which beeps you all the way home.

You find yourself preferring the rainy days, when there is no need to water any of your crops, freeing up time to try and get on with the other slow storyline arcs. But, without too many spoilers, there’s not really enough of a pay-off. You can upgrade your tools, including your axe and hoe, which allows you to use them on tougher materials, but it’ll be a long time in before you’re able to do this due to the amount of money the upgrades cost, let alone the time it takes you to get all the materials together.

If you can deal with slow-paced farming sims, which take a long, long time to deliver their plot, there’s something for you here. Those with less patience and those looking for something a bit more visually stimulating should go elsewhere.

Slow-paced, full of grinding and quite ugly, this Harvest Moon isn’t for everyone. If you enjoy the genre you’ll get something, but others won’t have the patience.