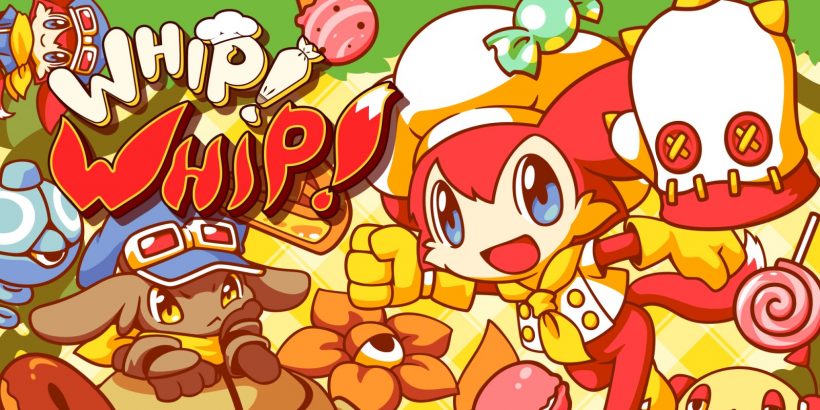 Whipping up a treat

They do say that the simplest ideas work the best.

Whip! Whip! isn’t far off the simplest that games possibly come – certainly at least in terms of its gameplay. As Tira the dessert hunter, the story sees you explore “ruins” to locate a legendary dessert recipe. This story has little to no bearing on the gameplay whatsoever, but at least gives you an incentive to play through to the end.

The titular whip may or may not be dessert related, but does refer to Tira’s own ‘whip’, which she uses like a grappling hook, latching onto enemies and racing towards them to see them off.

There are a hundred levels to play through as you take on the game’s story, and your mission on each level is exactly the same: to dispose of every enemy on the screen, and collect the sweet treats which they drop when killed. Each of these treats has its own points total, and it can be quite a challenge to reach every one of them, with obstructions stopping you from simply running from one side of the screen to the other. There are also collectible letters which raise up through the stage in balloons which you’ll need to be mindful of if you want to get them – once the final enemy is beaten and their sweet treat is collected, you won’t be able to then go and chase down the balloon.

Each ten levels there’s a boss, but they’re all pretty easy to figure out. Each has a red spot somewhere on them which needs to be whipped three times for the victory, and only one or two of these caused a lot of trouble.

As the levels go on and become more complicated, the enemies become tougher – some can only be beaten by whipping them from below – others will electrify themselves to make them invulnerable for a short period of time, and others will take two whips before succumbing. Further challenge comes in harmful objects littered around stages – you’ll need to ensure your starting position for a whip is well clear of these hazards to ensure you don’t go losing a heart of health when pulling off an attack.

Despite this – there’s no real penalty for losing your hearts and getting a game over. You’re able to restart from the same exact level – not being forced to go back to the level after the last boss, for instance. There’s a co-op mode at play, which makes things a little more chaotic, but you won’t have much of a challenge in seeing off every level of the game on your own.

Visually the game looks like it should be placed somewhere between the NES and the SNES generations – pixelated graphics and blocky edges on the stages itself. The game area is in a square shape on the screen, giving the compact feel of a Super Mario Land, which perhaps feels a little basic.

When you become good at Whip! Whip!, its gameplay can become quite satisfying. You can whip from enemy to enemy in quick succession without touching the ground, provided you’re within the range measured by the length of your whip. Nailing your tactics in order to take out every enemy in the level in one fell swoop is mighty satisfying, but it doesn’t happen often.

Whip! Whip! is easy enough to finish in two hours, but the gameplay is pretty good. A pleasant surprise – arcade fans will enjoy it.