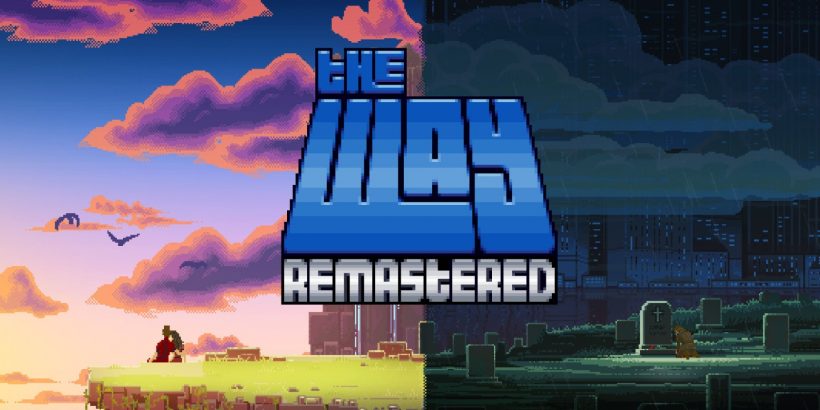 This one’s looking for the way to better controls

Available for a criminally cheap £2.69, The Way Remastered is the first appearance on a Nintendo system for this retro-style puzzle platformer which was first released elsewhere as recently as 2016.

You play as Major Tom (yes, he gets in touch with Ground Control at one point), who begins the game quite memorably by digging up his wife’s grave and putting her in a Walt Disney-esque pod in the hope of bringing her back to life somewhere down the line. He has access to a spaceship, which you’ll need to retrieve in the game’s first mission, before exploring some fantastical worlds in the sections that follow.

There surely cannot be a more beautiful game out there which is designed entirely in this pixel art form. From staring from cliff edges across stunning sunsets to taking in the greenery of a ravine, The Way is most certainly the prettiest of remasters. It really does give life to the surroundings, drawing players into the story and quickly establishing an arc that keeps you playing as you want to see if his wife will be resurrected in the end.

You pick up a gun early on, but the puzzle focus here is on four abilities including telekinesis and hacking terminals, but there’s a decent amount of variation in the way all of them are engaged. From traditional maze puzzles to ones you need to figure out an order and then solve appropriately, this is a testing game, and you can’t simply waltz through the story.

But where The Way Remastered excels in its visuals, its world building and its story, it falls apart with lame and irritating controls. In a game which requires pin-point platforming precision, you never really feel you can full predict the arc of a jump, and as such you may find yourself plummeting to your death where you thought you might succeed. Enemies can jump out from literally nowhere and offer you zero time to react – I’m all for  a challenge, but there’s nothing you can do with zero thinking time to deliver your reaction.

You get unlimited respawns, and the respawn point is usually just a few moments before the point where you died, but the enjoyment should be from defying death, not just telegraphing exactly what’s going to happen because you’ve already suffered a million deaths at the hands of the predicament. There’s one section where you have to dash between laser beams which have differing (but mostly very quick) on-off schedules.

It’s not enough to hang fire and figure out the patterns of the beams, because dashing forward has such a lack of precision you’ll be careering straight into the danger spots without feeling like you’re able to come to a split-second and precise stop. The control issues continue with the jumping – there are points where you simply want to drop to the ledge below you, and holding the B button does this. One problem – tapping B jumps and grabs the ledge above. You always have to focus on not confusing the game as to where you want to move to, and sometimes your overthinking can lead to you erroneously plummeting off a ledge and to a crushing death.

The Way Remastered isn’t an experience you’re going to forget in a while, but it would be markedly improved with more accurate controls. As such, it’s more irritating than it is inspiring in its current form.