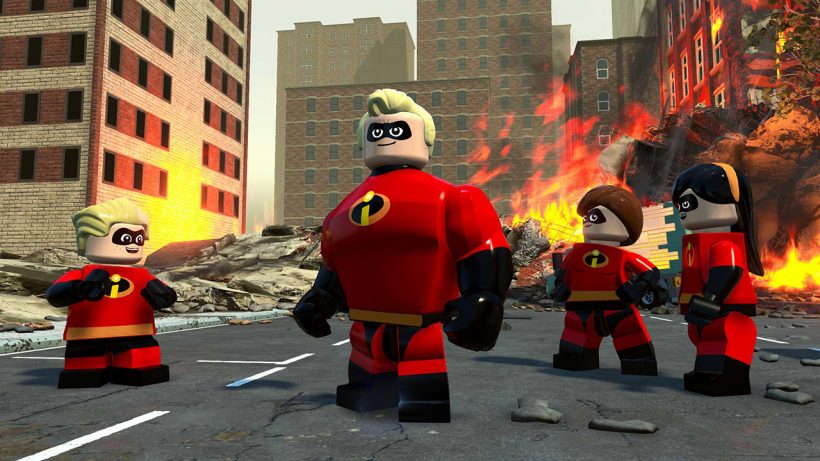 The Switch’s most incredible title.

Ah, The Incredibles. Disney Pixar’s crimefighting family had spent a considerable time out of the limelight since their first (and for a long time only) film outing in 2004. But in 2018 they’ve blazed back; not only with a long-awaited film sequel, but also by getting the LEGO video game treatment.

This game allows you to play through the story of both films, starting with the newest one, all the while fighting crime, rescuing civilians and amassing the bricks to build up some LEGO creations. The Incredibles’ home town of Metroville serves as the overworld hub, and like in so many LEGO City Undercover you can explore it to your heart’s content in between story missions, picking up short side-quests and collectathons which serve to increase your overall game completion percentage.

And the game excellently captures that Disney Pixar magic that we loved going to see in the cinema when we were kids. You really do feel as if you’re in the world of The Incredibles, even if it is in LEGO-fied form. You can get a second player involved for co-op playing through the main story, and it’s the ideal sort of game that two young kids can use as an introduction to gaming. That familiar LEGO game gamplay and humour is present, and most objects can be smashed into pieces if you have some pent-up frustration to take out.

You can drive just about every mobile vehicle in the game and you’re free to go wherever you like; though the structuring of the missions by the developers does tend to lean you towards sticking to the set path, with objectives often quite close together and not giving much space to think about turning to go elsewhere. The story levels themselves seem quite short and compact in this game, and the main story can be raced through in not a lot of time. Each of the Incredibles family can use their powers – Helen’s elasticity and Dash’s speed, for example – but they don’t offer much freedom in being used beyond the planned set-pieces, like Helen stretching through a grate to hit an out-of-reach switch. You don’t really feel too much like a superhero when heading around the city for that reason.

But yes, it’s the LEGO gameplay we’re all familiar with by now.

The thing is, with the LEGO games, if you’ve played a lot of them you probably know too much of what to expect at this stage. Whether it’s LEGO City Undercover, LEGO Star Wars or LEGO Lord of the Rings, each follow the same gameplay template with very little other than the surrounding character worlds to tell them apart. That’s not to say that LEGO The Incredibles isn’t a fun game when taken in isolation, but long-term players of the LEGO series won’t carry anywhere near the same wonder that they had when booting up one of the earlier titles.

Getting the 100% is more of a grind than it ought to be. You’ll need to collect a heck of a lot of LEGO pieces to reach the total needed for completion – the balance should have leant further in the direction of the storyline and the comedy. Still, it’s undoubtedly going to be more than enough to keep young children entertained, and captures just enough of that Disney wonder to be worth a play.

LEGO The Incredibles doesn’t do anything new as far as LEGO games are concerned, but the Disney magic seeps through. These games work for their sense of adventure and their comedy, but they should have less focus on the grinding for bricks.