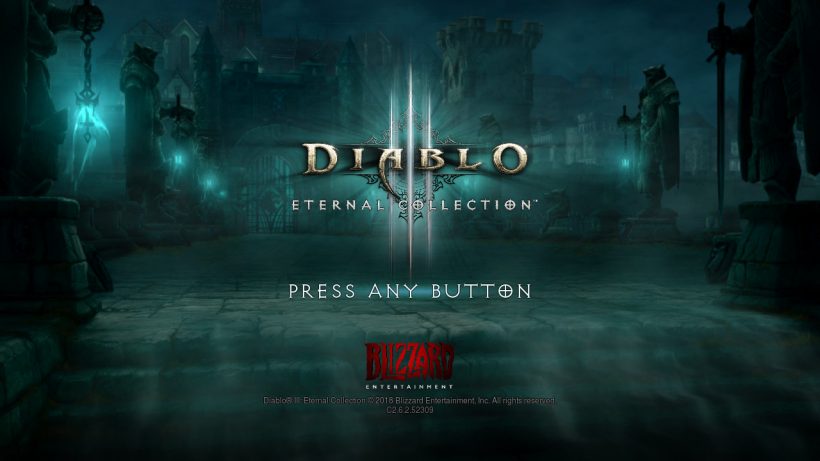 Wanna go on a looting slay ride together with you

While you can never get enough of the colourful fun of Nintendo, the Switch has also been embracing its dark side, whether it’s slaying demons in DOOM or coming up against formidable foes in Dark Souls Remastered. Joining the demonic party just in time then is the granddaddy of them all, Diablo III, which also marks the return of Blizzard to a Nintendo console since Starcraft 64 nearly two decades ago. But whereas back then the RTS felt like a compromised port to accommodate console limitations, Diablo III arrives on the Switch like the platform it was always destined for.

As with other ports of older games with various iterations and expansions, sometimes the best things come to those who wait. With the Eternal Collection, you’re getting everything of Diablo III bundled together, including the Reaper of Souls and Rise of the Necromancer expansions that gives you a total of seven classes and five acts in the story campaign, whilst the unpopular features from the original game (or bugs) have long been nixed. 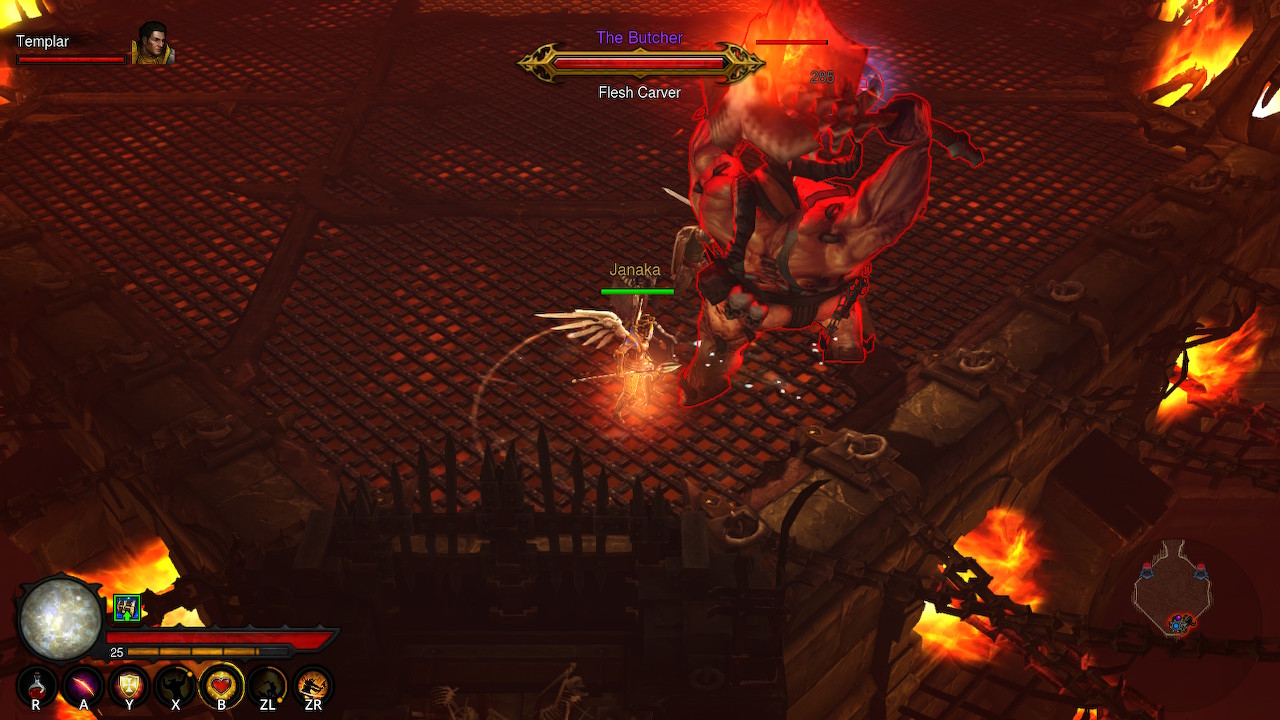 I won’t say much about the apocalyptic story suffice to say that once you’ve picked your hero for this top-down dungeon crawler, you’re pretty much on a non-stop roll of carving up demons, skeletons, cultists and all manner of hellspawn, and the slay ride pretty much doesn’t stop, nor would you want it to. From the humble beginnings of just mashing your basic primary attack, you’ll soon level up and unlock new skills, such as a secondary attack powered by the energy you generate from your primary attacks, as well as other devastating attacks or buffs with their own respective cooldowns to keep those undead… well, properly dead (unless of course you’re playing the Necromancer). Skills are all aptly mapped to your buttons, and it’s a surprise that besides Pro controller support, it’s even possible to play the game on just a single Joy-Con.

In fact, it’s hard to believe that Diablo originated as a PC game played with a keyboard and mouse when everything feels so well mapped to a controller, while pushing the right stick in any direction also executes an effortless dodge roll (as an absurd but considered touch, you can still roll with a single Joy-Con by flicking the controller).

Meanwhile out of the bloody remains of your foes are an abundance of shiny loot drops of weapons and armour to steadily make your hero an even leaner, meaner slaying machine. That momentum of carnage is encouraged too since you get an XP multiplier bonus the more continuous kills you can rack up, which of course gets you levelling up even faster, which also envelops you in a bright heavenly glow each time, refilling your health and skills while eviscerating nearby enemies and keeping up that carnage. 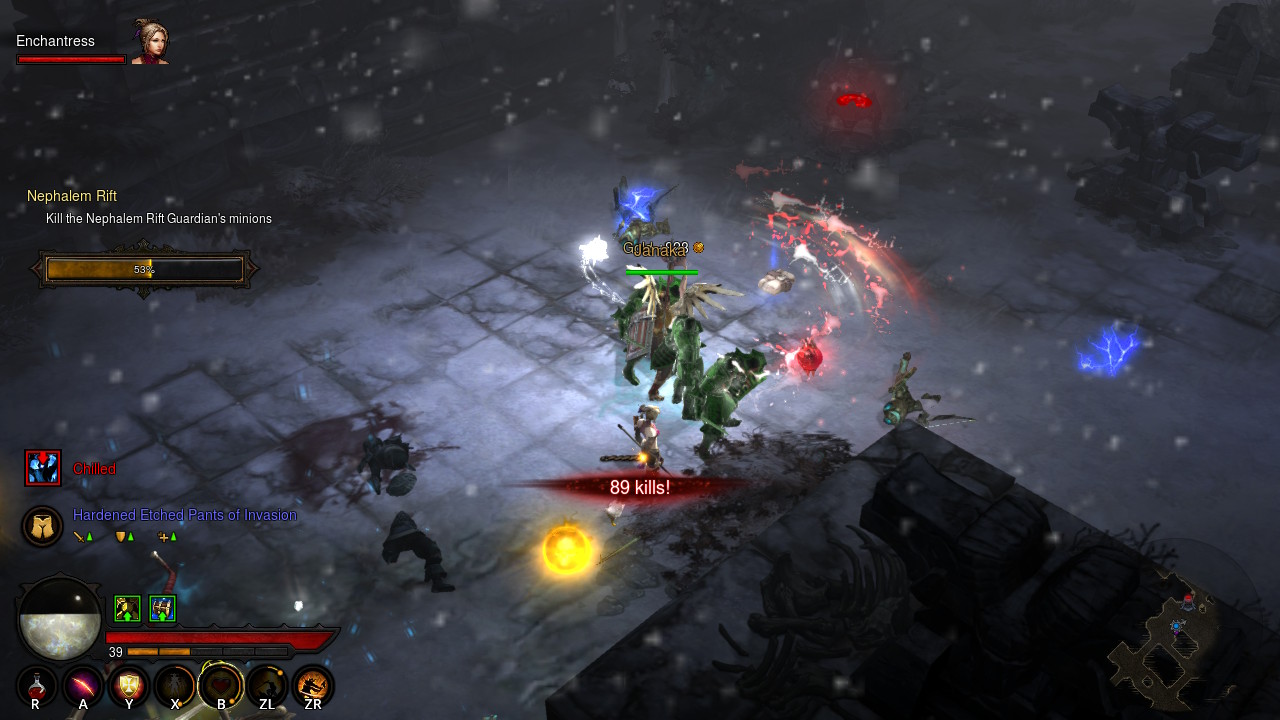 You do have to take moments to pause though simply because navigating menus becomes a very frequent part of Diablo as you’re compelled to experiment with the new skills or runes for older skills you unlock as you level up, as well as of course examining and equipping all that beautiful loot after another epic slaughter.

If there’s depth to the loot and variables awaiting you, it doesn’t always necessarily show in the moment-to-moment action, which can essentially feel like a bit of a mindless button-masher while spamming skills the moment their cooldowns are finished, though that’s not a bad way to pass the time on the commute or while watching Netflix. But just sitting down to play the campaign by yourself can feel somewhat repetitive, which is why it’s great that Adventure modes and the online-based Seasons are available from the get-go, especially accommodating to any returning players who can dive in tackling the Nephalem rifts or going hardcore with a permadeath run on the highest difficulty.

But to really get the most out of Diablo III, you’re going to want to play with friends, and the Switch version delivers. The fact that the game is playable with a single Joy-Con means you can at the very least play with a friend from the off, though with all the text and menus and messy chaotic slaughter you encounter, it’s better to do local multiplayer docked. Up to four heroes can get together in one game, while the use of the Switch Online Service’s cloud data means you can import your hero data over to play at another friend’s Switch if you want.

The one drawback of playing local multiplayer however is that the pace of the action can drag if everyone wants to check their own loot or swap skills, which is probably why the best way to play together is if everyone has their own Switch (and copy of the game) and connect for wireless co-op, with the screen focus on your own character and menus without disrupting everyone else’s flow, while dialogue and cinematics are also tied to your own hero – hell, you can even wander off to a crypt to fight hordes on your own if you prefer since you’re not sharing the screen. However you choose to play though, this is an absolutely solid experience maintaining its 60fps fluidity amidst the chaos even when you’re racked up over 100 kills. 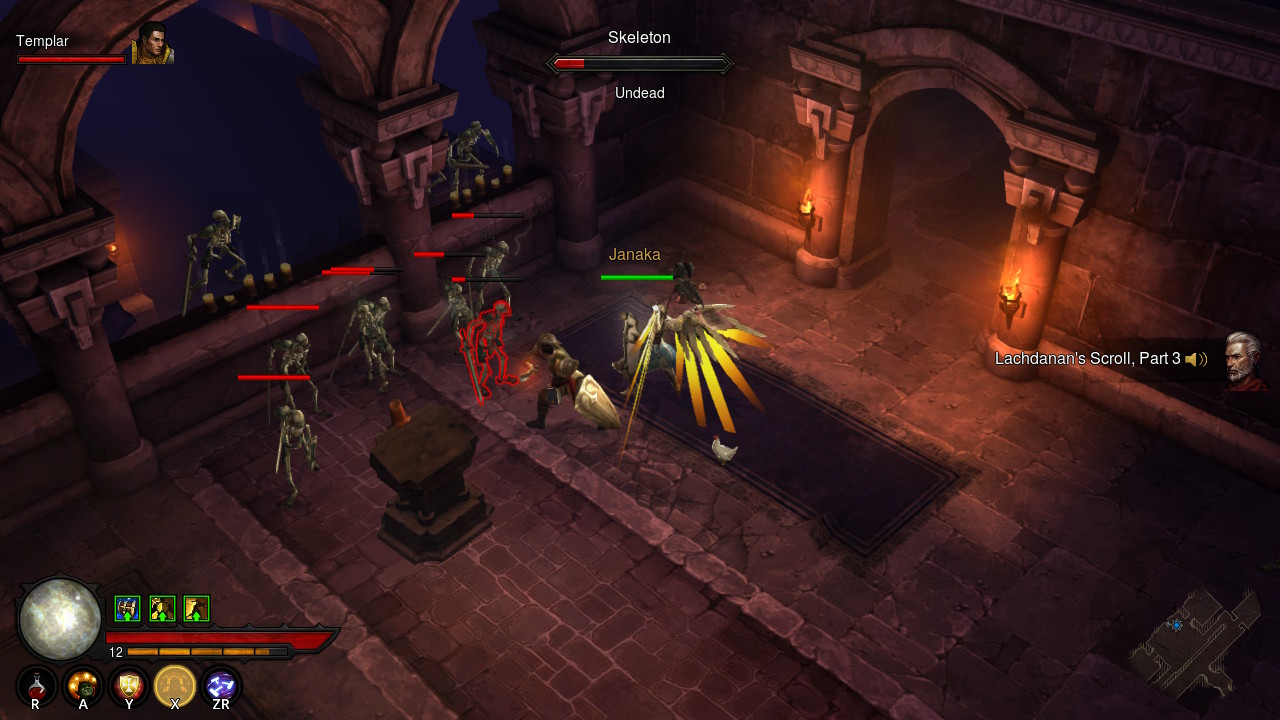 The usual online play also exists of course, whether that’s connecting with strangers for a quick play or playing in a lobby with just your friends, but it certainly wouldn’t be a surprise if Switch players getting together for regular Salmon Runs in Splatoon 2 or group hunts in Monster Hunter Generations Ultimate find that Diablo III would make a great fit in their schedule instead. Be warned though that if you do plan to play Diablo III handheld you might want to bring along a power bank because, even for an old game, it certainly consumes the battery life fast, draining mine in about two and a half hours.

Whether this is the beginning of beautiful friendship with Blizzard, like with Bethesda, remains to be seen. This is after all still just a port of a six-year old game, albeit a polished and complete one (with the price to match), so it’ll be interesting to see if this will open the doors for ports of more of Blizzard’s presently most beloved games like Overwatch. In the meantime, players with a fetish for loot and demonic bloodlust needn’t look further.

Demon-slaying may feel simplistic compared to Monster-Hunting, but as the pioneer of the co-op loot-chasing dungeon crawler, Diablo III: Eternal Collection is the definitive article on the Switch, packing a wealth of content and variety of ways to slay.