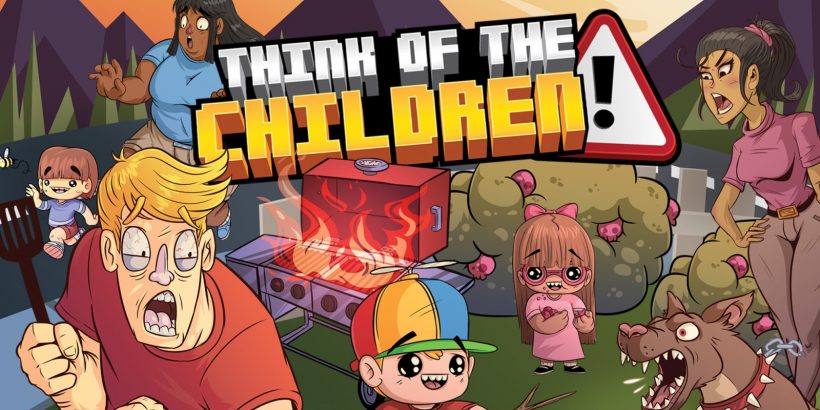 Parenting: it’s never easy. But fortunately, real-life parenting is nowhere near as difficult as it is in Think of the Children, from developer Fellow Traveller.

This is a co-op party game where the aim is to keep your high energy youngsters from doing themselves inconceivable amounts of damage in the blink of an eye, all the while trying to get on with doing day to day activities from shopping to a trip to the beach. After a brief tutorial where your three main controls are explained – you can pick a kid up, call it to move it away from danger and hammer the A button to perform other objective-focused tasks – you’re chucked right in at the deep end with a family barbecue. The game gives you your list of objectives, from tending the barbecue to laying picnic tables, but what it doesn’t tell you is that these objectives are your secondary mission, because the tribe of six kids are hell bent on offing themselves in the most stupid and creative ways possible.

From level to level, some will be drinking bleach, others taken away by social services, run over by cars, eaten by sharks… there are so many ways for what should be a pleasant family day out to go wrong. These kids are ready to drop like flies, and you need to be prepared – so this game is miles better with four people playing at once. The chaos that the kids create is far too much for just a solitary parent to handle, so at least by divvying up sections of the field to certain players, you might be able to more realistically stay on top of things.

You know how you yelled at your little sister / spouse / grandma when they kept cutting your character to pieces when playing Snipperclips? It’s that same kind of unadulterated yelling which is generated by the co-op fare here. Anyone not pulling their weight could result in the kids’ death, the barbecue catching fire or grandad getting so sunburnt he combusts. It’s wacky, and there’s actually a hilarious courtroom storyline linking the levels together too, which is a big plus. Think of the Children is anything but a throwaway package, with the humour done well and the escapism of being able to actually throw kids away from danger.

Returning to Snipperclips, this is another great title to bring out at parties which people will be able to jump on board with right away. With such relatable subject matter and such far-fetched predicaments, it’s a game which, while difficult to master, keeps you engaged until the end. The only real criticism – other than feeling your characters just don’t move fast enough as you watch a child get incinerated while you’re just two steps away – is that it just doesn’t work as well if you’re playing on your own. There are still the same number of kids to keep an eye on and the same objectives.

With friends, though, it’s just about as much silly fun as you’re probably going to get from a video game. Just perhaps steer clear if you’re looking for some real-life parenting tips.

Think of the Children

Think of the Children is a chaotic and fun party title. Whether on the beach or in the shops, it’s frantic and mad. You’ll find out a lot about your friends as soon as you get them hooked.