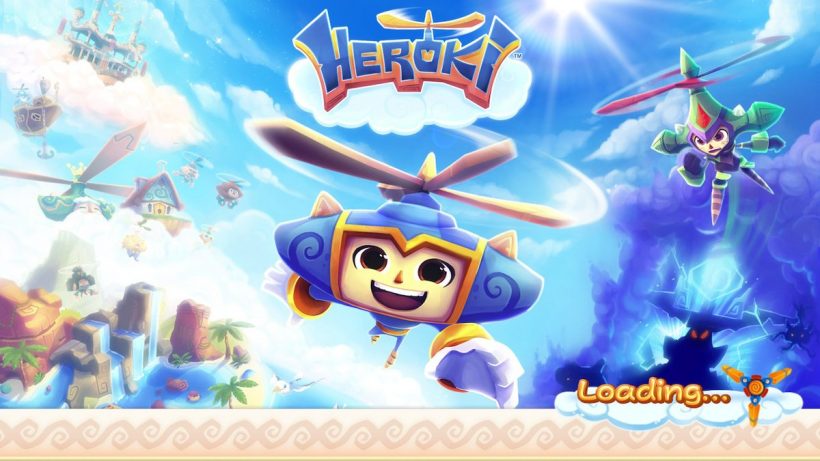 Heroki is about a hero who finds his world threatened by the evil forces of Dr. N Forchin and his minion Vapor. Heroki awakens one day to find the the treasure of his home town, the Emerix, has been stolen, and is tasked by the village elder to rescue it, or his village could be doomed.

As a platformer, the game is split into several different worlds, all with various different themes, with water-based and lava themed worlds to name a few, but the goal remains the same; get to the end of the level through solving puzzles and and collecting various different types of objects along the way. These objects include collecting the series of letters H-E-R-O-K-I scattered around the stage, similar to those found in classic platformers of old, with Donkey Kong Country as perhaps the most memorable example that comes to mind.

Heroki’s ability to fly is what forms the basis of the game’s many challenges. For example, objects will be attached to balloons and pose a danger, so to circumvent these obstacles Heroki will need to avoid projectiles and pop the balloons to eliminate the danger from the equation. Other puzzles you will need to solve include gaining entrance into caves blocked by crates – you will have to use Heroki‘s grab ability to move the boxes out of the way in order to gain entrance, and finding the correct order in which to move these boxes makes this an often challenging task.

My main issue with Heroki is that the game gets incredibly monotonous after playing for a while. The variation in gameplay and puzzle solving quickly dries up, and I was often left feeling tired of what seemed to be the same thing over and over again. Thankfully, boss fights are varied enough that they offer a healthy enough challenge and a break from the repetition, with a final boss who is especially challenging.

One major part of Heroki where quality stayed consistent was the graphics. Heroki is a very beautifully designed game, where every character model and environment has a beautiful watercolour aesthetic and everything appears connected as one beautiful world. The soundtrack is also noteworthy for being full of fun and cheerful tunes which wonderfully convert to dark and fearful numbers during later levels and boss battles, perfectly capturing the threat of the situation based on the style of level you’re playing.

As a port of a mobile game, Heroki on Nintendo Switch is one of those games where the conversion to console is so good that it almost feels like a game built from the ground up for the platform. The gameplay itself, however is too full of mediocrity and repetition, which sadly lets down the package as a whole.

As beautiful as Heroki may be, its gameplay unfortunately doesn’t compliment its design, making for an unfortunately mediocre platformer.