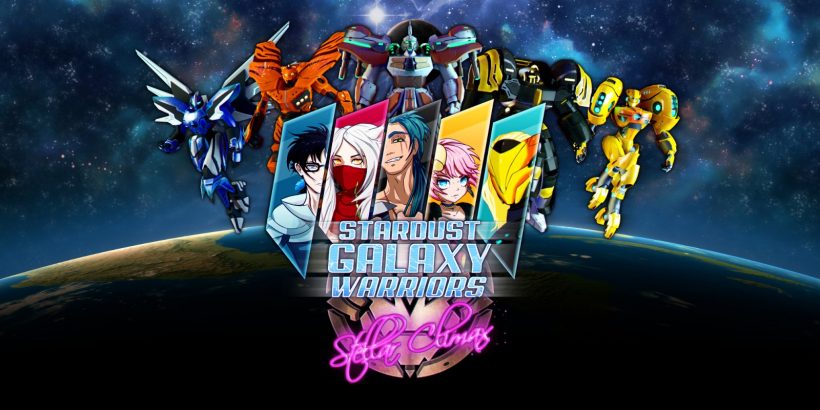 Though not the only genre on Nintendo Switch guilty of this, the eShop isn’t left wanting for top-down, space-based shooters. It’s almost like the developers of Stardust Galaxy Warriors: Stellar Climax recognised this fact, and instead opted to provide their own spin on the tried-and-tested formula by simply doing away with the traditional overhead perspective. Yes, this souped-up version of Stardust Galaxy Warriors might contain a lot of familiar elements, but playing it from a side-on viewpoint does a lot to help maintain a surprising shoot-em-up challenge. And a rather bombastic and flashy one at that.

As you might expect from a game of this nature, Stardust Galaxy Warriors: Stellar Climax is all about its airtight gameplay rather than a deep story. There is an overarching narrative at hand – one which sees a group of teens use their mechs to soar through space and battle the forces of evil – but it all too easily falls into tropey anime territory. Rather, it’s when you’re knee-deep into Stardust Galaxy Warriors’ brand of chaotic shooting action that the real fun begins.

Each session starts out with you choosing one of five playable mechs, all with their own unique weapons and special abilities. From here you’re able to take the personalisation further, customising a loadout by swapping in a primary and secondary weapon that works best for your play style. In my five or so hours playing, I soon grew a fondness for Blue Falcon, who, what with its scatter missile-like photo javelin ability, worked flawlessly with an equipped rail gun and homing missile to decimate the reams of enemies that stood in my way. Stardust Galaxy Warriors is full of in-depth ways to customise like this, even going so far as to offer eleven separate levels of difficulty from Sunday Stroll to Melee Mayhem.

This leads to another element unique to Stardust Galaxy Warriors. You know how in most top-down shoot-em-ups you’re limited to just ranged attacks, leaving you open to approaching enemies that get a too close for comfort as a result? Well here, at any time in your mech you can hit your enemies and free up some space with a devastating melee blow, effectively turning the tide and making use of another layer of strategy. You’ll appreciate the extra manoeuvres a lot by the time you get into the campaign’s later levels, which aren’t afraid to put you through the ringer – even on normal difficulty.

Stardust Galaxy Warriors makes a bold gameplay choice in that both of your weapons can be set to auto-fire with a tap or the front Switch bumpers. ZR and ZL let you take back manual control, but to be honest, levels can sometimes be so chaotic that you’ll need to use this to your advantage, as doing so lets you concentrate on weaving your mech around the various swarming incoming projectiles. Such instances only get crazier when breaking off a couple joy-con, and experiencing the side-on insanity with up to three other players.

Stardust Galaxy Warriors: Stellar Climax is a fresh enough addition to the shoot-em-up family that genre newcomers and veterans will find fun in the space-based madness. The campaign may be generic and the enemy variety a little lacking, but it’s more than made up for an impressive level of customisation and unexpected polish that makes this one a great choice to keep on your Nintendo Switch dashboard.

Those wanting something a bit different from the always-familiar genre of space shooters will likely find it with Stardust Galaxy Warriors: Stellar Climax.