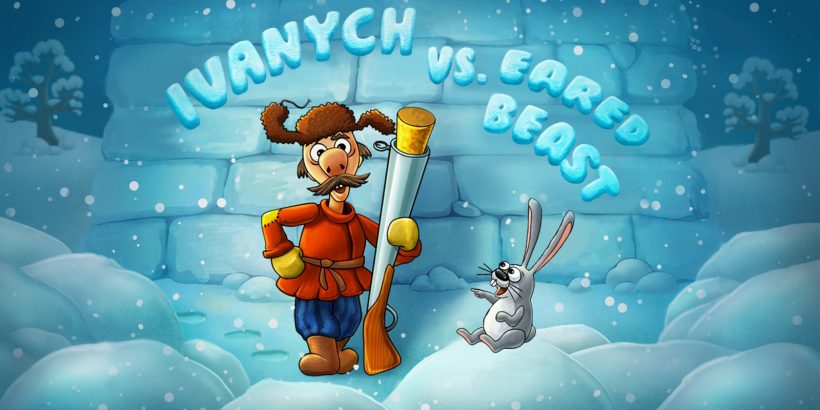 I’m all for choice and variety on the Nintendo Switch eShop. It’s impossible to argue that, despite the flaws in its interface, the system has on the whole been a success so far, with download only titles like Fortnite, The Sexy Brutale and Piczle Lines DX all presenting different types of experience to great effect.

But of course, not everything can be a new idea – there are a bunch of similar puzzle games, way too many roguelikes to be able to stay on top of them all and quite a few endless runners, to name a few. Ivanych vs. Eared Beast falls into that latter category.

The name is misleading – you play as Ivanych, and the eared beast is a bunny – the dynamic between the two characters is quite clearly an imitation of Bugs Bunny and Elmer Fudd, the hunter who tries in vain to take down the bunny who everybody much prefers. But the relationship between the two in Ivanych vs. Eared Beast is more akin to that between the shooter and the dog in Duck Hunt – the bunny will simply make fun of you if things don’t go your way.

As mentioned, rather than a hunting game, this is an endless runner, and it’s a particularly straightforward one. Set in a wintery climate, Ivanych runs along a path laden with walls made of snow, and must use his trusty cork pop gun in order to crumble the walls by pulling the trigger at just the right time. You need to get through thirteen of these walls in a playthrough, and Ivanych will automatically kick the bunny through the final one to end the session. But once you’ve done this – which can only last for no longer than a minute – you’ve seen everything the game has to offer.

There’s no getting around it; this is an incredibly light package. Ivanych vs. Eared Beast has two gameplay modes, one being perhaps the most inaptly named ‘story mode’ I’ve ever seen in video games, and the other being a survival mode where you smash through as many walls as you possibly can until a moment of inaccuracy halts you in your tracks.

The story mode is that aforementioned running through thirteen walls – but when you’ve got through all thirteen, that’s it. There’s no further levels no finishing cutscene but for the kicking of the bunny through the final wall, and absolutely no element of any kind of story at play whatsoever. Survival mode, meanwhile, is about setting a high score – but criminally, the scores aren’t even recorded once you finish, and the gameplay is identical to the story mode.

The words light, basic and characterless come to mind – there’s nothing whatsoever here which allows the player to form any kind of affinity with the game.

Ivanych vs Eared Beast never feels anything more than lame. Light on content, and without a way of recording your best scores, this is poor.