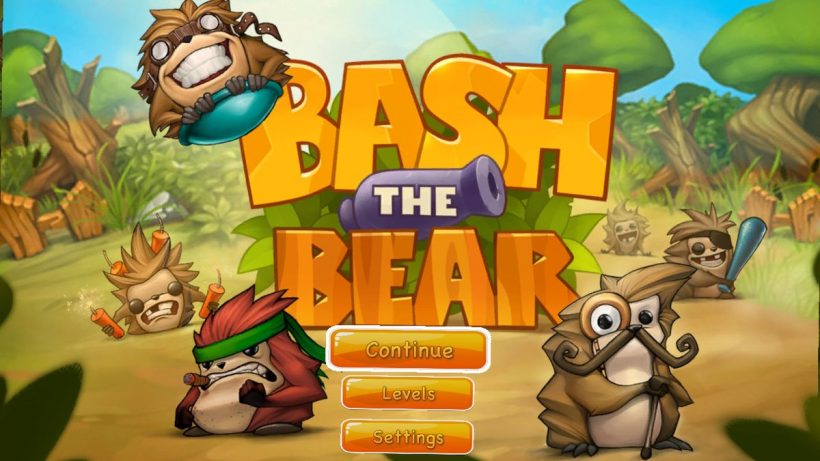 Pestering animals in their natural habitat is usually the domain of the worst kinds of people; trophy hunters and the like are universally despised outside of their own circles. But if it’s a smaller animal doing harm to a larger one, then that’s a-okay.

In Bash the Bear’s tiny bit of plot, an angry bear disturbs the peace of the animals of the forest by casting a towering shadow over them and stealing their mushrooms. From that point on, you’re faced with a series of levels where as the smaller animals you have to torment the bear as it sleeps by firing an animal out of a cannon at it. It seems pretty much like overkill for one incident of the bear scaring everyone else, for sure, but that’s the way it is.

The developers use a twist on the simplistic gameplay of the likes of Angry Birds, which of course involves using power and trajectory in order to strike targets. In Bash the Bear, the focus is more on straight lines, using elements of the environment to switch directions and gaining more power through the use of other animals placed around a level. Initially, you’ll start off with the twins – two little gremlin-like things which carry baseball bats which can your shots up, down, left or right with more power. Shots lose power with time and will come to a lame halt if they don’t cross the path of the other animals in due time – you can set the direction of all the follow up shots and the trick is to ultimately get your shot to hit the bear, whether the shot is clear or you need to destroy some of the environment in order to do so.

As the game progresses, you’ll unlock assistants with new capabilities to offer some new dimensions to the levels. Rather than simply the simple up, down, left and right, one character will fire diagonally; another will use a fan to blow your shots slightly off course while another still uses explosives to destroy the surrounding environment any time your shot comes within distance. Each add their own mechanic to the gameplay, but the overall feel of each level never really alters. For the game’s 75 levels (with more coming soon), the objective and the feel remain constant, and with no new alterations in terms of characters which can affect your shot once you’ve unlocked the explosive one, the enthusiasm begins to wane with each passing level.

Of course, this is a game designed for short bursts in a train or car journey – it is a mobile title, after all – but at least at a price of £4.49, you can play a few levels here and there and it’ll last you a good while in getting through all of the levels.

Bash the Bear is fun for a good chunk of its playtime but the novelty wears thin by the end. It’s likely to go for cheap in an eShop sale someday soon.