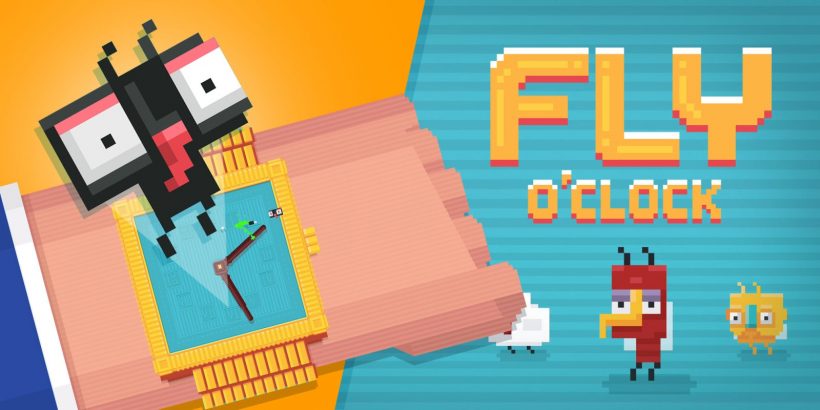 Fly O’Clock is a game with a simple concept which uses an even simpler control method.

The aim of the game is to avoid being hit by the ever-faster rotating hands on the face of a watch. Using just the one button, you play as one of sixteen different characters, each sharing the aim of surviving as long as possible by hopping into any of the four corners of the watch face (imagine it’s a square – bear with it). The catch is you can only jump anti-clockwise, so you can never simply run away from the rotating hands. The longer you survive, the faster the hands on your watch spin, so the pressure is always rising.

There is no lives system in effect, so one mis-timed jump and it’s game over. The game also supports local multiplayer so you can join in with up to four friends which adds a bit more competitive spirit into the mix. If the Classic mode doesn’t take your fancy then you can also play a Race; you set a pre-determined amount of jumps to reach and whoever completes the quota first claims the winner’s crown.

You won’t have access to all of the game’s characters from the start. In order to unlock them you’ll need to gain experience through playing either of the two modes on offer which does gives you something to work towards. The problem is you won’t likely be playing for long periods of time, so unlocking all of the characters isn’t really something you’ll go out of your way to do. This being a game released at a very budget price, there is vary little in terms of variation to the gameplay, meaning its rinse and repeat gameplay formula can make bursting out all of the unlockables a chore.

The game is presented in a stylistic look of stripes and squares. That’s something which makes the whole thing feel rather cutesy, which at least gives you some sort of connection with its characters during short bursts of play. Fortunately a game light on content does offer itself at a competitive price at £1.79, so those hardly Switch collectors who are looking to beef up their eShop set will probably have added it to their system by now, but there’s little more here for anyone else.

Whilst the game does feel a fraction more enjoyable in multiplayer, Fly O’Clock is very much a smart phone game first and foremost, and that’s perhaps why it feels a little lacking on the Switch. Get it because it’s cheap; that’s the only way for us to recommend it.

Fly O’Clock provides for very short bursts of entertainment. Getting some friends involved helps, but realistically you’ll only want to invest in this if you’re a high score chaser.